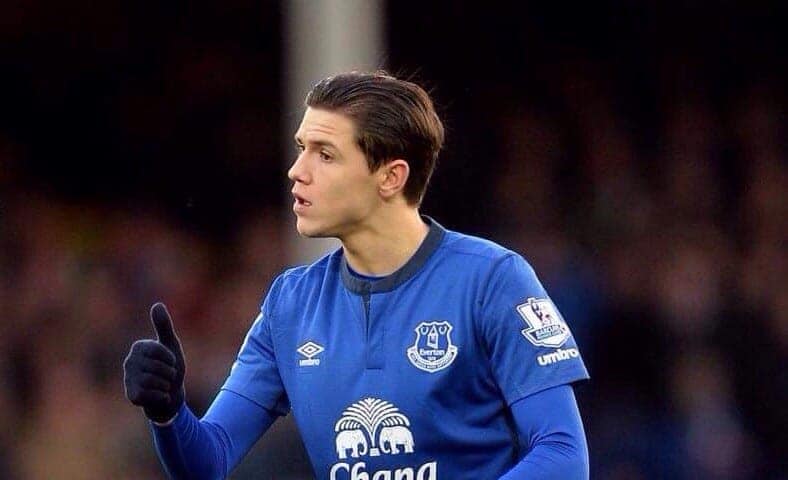 Muhamed Besic has become something of a fans favourite recently but he has insisted that Everton fans will only begin to see the best of him next season.

The 22-year-old, has shown he is coming to terms with the rigours of English football since signing from Ferencváros last summer by producing some outstanding displays.

His man-of-the-match performance in the FA Cup against West Ham earlier in the month was followed by no nonsense and committed displays against West Brom and the champions Manchester City.

Although he says it has taken him some time to settle in to life on Merseyside, the Bosnian international says the support of the Evertonians has helped him settle in as quickly as possible since his arrival.

And for Besic himself, that is a welcome boost as he looks to keep his place in the starting line-up.

“It helped me a lot,” he said. “At Ferencváros the fans loved me so I had to do the same here, maybe it has started but I don’t know. I like it when the fans support me.

“I don’t know why they like me. I think maybe they like my style but you’ll have to ask them.”

That may be down to his penchant for a tackle, and Besic revealed that it was the intervention of his father that fostered that particular aspect of his game. A successful trait now he finds himself playing as a defensive midfielder.

When asked where his tackling side of the game came from, Besic revealed it was all influenced by his father.

“I like tackling. When I was younger my father was always criticising me about not tackling and saying I was too easy, After two or three years I started to play as a central defender and started to tackle more.

“I practised in games. When I went to Ferencváros I would play more games as before. When I was at Hamburg, I would only train with the first team, never play.

“For me it doesn’t matter where I play, I only have to play more games in that position because always when you change, it is difficult to adapt.”

“I am happy now that I have played many games as a number six. Now I can learn and improve

“I am very happy that it is like this,” Besic said.

“I’ve been here five months and it is a big thing for me. I have only been playing for half a season and so know next season I will show my best.”

When asked which of his performances has been the best this season, he said: “There is a lot more to come from me.

“I only give my best so I don’t know if Manchester City was my best game.

“Every game I have been getting better.”

In the interview he also explained how he has been forced to adapt his style of play in order to cope with the English game.

The midfielder has spent most of his career at centre-half and says he has been forced to reign in his enthusiasm for tackling – which most Evertonians might find hard to believe.

He added: “I have to learn about the style of play in England.

“Pass, pass then maybe one or two tackles.

“I can tackle as a central defender more but playing as a number six, I have to learn that if I miss the tackle there is space behind me.

“You have to be patient. I was centre-back for five or six years and the World Cup was the first time I played as a number six.

“Power and energy is my biggest strength but I have more so I need a bit more time to show it.

“I can dribble, for example, but I have not done that yet because I need time to feel the spaces, because the football is so fast here. In one second you can have ten players on you.

“It’s physical and very fast football. I like it but I am a little bit skinny so I need to put a bit more weight on. I am in the gym a lot.”