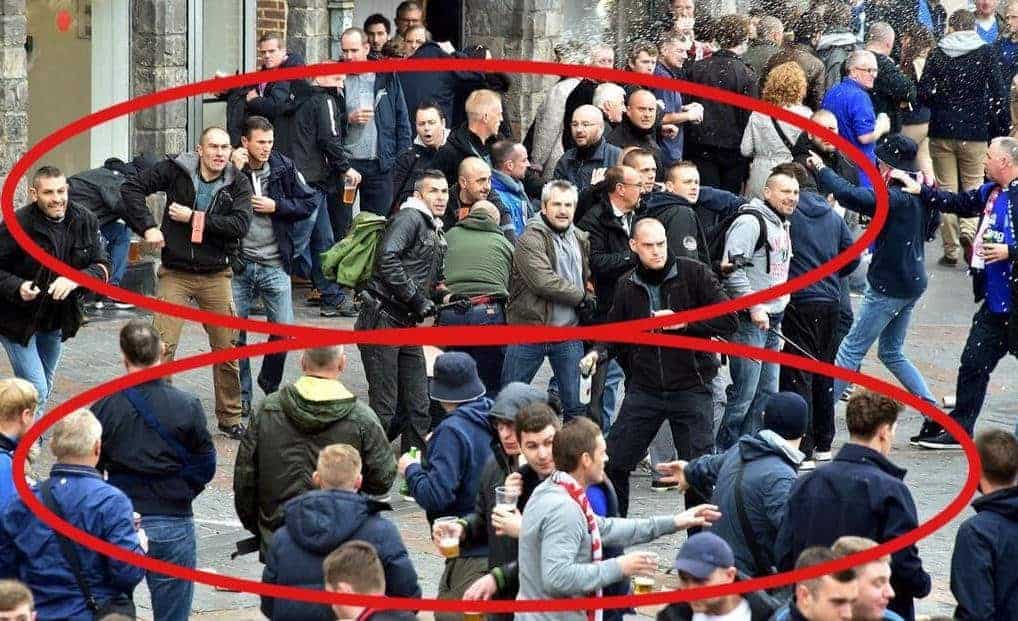 On closer inspection, you’ll note the top circle, who many publications report to be ‘Hooligan Everton fans’ are in fact, local police who stormed the fan base to arrest a single individual. You can dinstuinqush them by their batons, guns and dare we say it, smiles.

What actually happened in Lille…

What actually happened in Lille?

Let’s start by examining the view of the Lille police;

Official word from French police force on trouble in Lille: At 2.20 pm on 23 October 2014, police responsive for the security in the main square, where about 1,000 British fans had gathered ahead of the Europa League match between Lille and Everton, noticed that one of them – already spotted in yesterday’s brawl – was selling drugs.

The individual was arrested, but the action sparked a hostile reaction against police, who had missiles thrown at them. Intervention teams drove back the rioters, using a stun grenade and firing twice with rubber bullets in self-defence.

No members of the security forces were hurt, and no further arrests were made.

The individual arrested over the drugs was remanded in custody at the local police station, which has been tasked with the investigation.

Of course, if the French police deemed a single person among thousands to have been ‘selling drugs’, then they have every right to arrest this individual.

What their report doesn’t say, is the manner in which they did this.

Just hours after Everton fans were subject to an unprovoked and planned attack by Lille fans, the French police determined that the appropriate course of action was for unmarked officers to storm the Everton crowd;

No doubt, a couple of Evertonians reacted. The French police are correct in this version of events. 3 people, targeted the plain clothed officers with missiles, erroneously believing them to be opposition fans.

The police panicked/knee-jerked, no doubt intimated by the volume of crowds, flares and loud singing and indiscriminately fired tear gas and rubber bullets, causing several injuries to fans, including OAPs and Children; A member in our forum has this afternoon released extensive videos which reaffirm the above;

You can view more videos in our forum here

Everton have this afternoon released a statement, claiming intend to “better understand the two isolated but serious incidents that occurred in Lille ahead of our Europa League fixture this week.” If you was in Lille, please support the Club by reporting your version of events here.