With half the squad out injured the international break couldn’t have come at a better time for the blues. A convincing home win is exactly what the doctor ordered for Everton who admittedly haven’t got going this season as of yet. Standout performances from Baines and Barry as well as solid comeback efforts from Barkley and McCarthy ensured a comfortable 3-0 win against Aston Villa.

Leighton Baines – 9 (Man of the Match)

Fantastic, just fantastic. The best left-back on the planet shows us why he is exactly that. In the time i’ve spent looking at statistics for this team I have never seen someone create 7 chances in a single game. Leighton managed this on Saturday as well 5 accurate long balls, 3 accurate crosses and most importantly 2 world-class assists. Assisting Coleman from his favoured left side as well an incredible assist for the first goal with his weaker foot. Is there anything this man can’t do? No. The answer is no in case you were unsure.

2 goals in 3 games for our captain, this one not as spectacular as the derby but showing that he can really contribute to this team in many ways. Defensively Jags had 1 interception, 2 aerial duels won and 8 clearances, he had the 2nd most passes on the pitch with an impressive 92.5% pass accuracy.

We’ve all had our doubts about Antolin but he came into a broken defence and managed to achieve something Distin has failed to do this season, record a clean sheet. 7 clearances, 1 tackle and a 96.1% pass accuracy (highest accuracy on the pitch). He played sensible passes all game and did the simple thing under pressure, i like it. 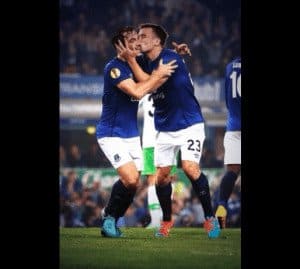 2 tackles, 1 interception, 3 clearances, 1 chance created, 2 shots, 2 on target and 1 goal for Seamus who is just vital to this everton attack. The lack of depth at fullback really shows when Coleman is out, Hibbert just doesn’t give us that dimension and it can be painful to watch him go forward. A great finish from Coleman as his fullback partner assists him for the second time this season. What a beautiful pairing they are.

Against his old team Barry was booed every time he touched the ball in the first half. This didn’t faze him one bit, showing off his full array of passing distribution as well as doing his bit defensively. 3 tackles (most on the pitch), 2 interceptions, 4 clearances with 85 passes (most on the pitch) at a 95.0% pass accuracy. These figures don’t do Gareth justice in my opinion, he was everywhere on the pitch. Every single counter attack seemed to originate from a sexy little touche or short passes from Barry. His wisdom and experience is simply invaluable to this team.

Big comeback game of McCarthy, the highlight an unreal block from a Tom Cleverly shot to stop the momentum swinging Aston Villa’s way. As well as this blocked shot he had 1 tackle, 3 interceptions, 3 clearances and a solid 94.9% pass accuracy.

With a severe shortage of wingers on the team roster, Martinez elected to play 3 central attacking midfielders with the hope that the two full-backs would provide the width. This seemed very effective on Saturday, Osman had a reasonably effective day with 2 shots, 1 on target and 92.5% pass accuracy.

To see Ross’ name on the starting team sheet was a huge surprise to most, having been out for 2 months. What a lift he provided to the whole team, the kid brings a completely different dynamic, taking on players (3 dribbles), shooting from range (3 shots, 1 on target) and most importantly providing some key passes in and around the penalty area (4 created chances and 1 assist). His excellent ball for Lukaku’s goal is just a perfect example of what we have been missing: good delivery to Big Rom. Let’s hope Ross can stay fit as I thoroughly believe he is the player we have been missing the most this season.

Out on the right wing Naismith adapted his game reasonably well, what I love about Naismith and still think he doesn’t get enough credit for is his ability to win aerial duels. Steven won 4 of his 5 aerial duels (most on the pitch aside from Christian Benteke). When Naismith wins a header it often leads to a good attack as possession is gained higher up the pitch. He also had 2 shots (both off target) and one accurate cross.

There will be no one happier that Ross is back than Lukaku. The two seem to understand each other, Lukaku loves having the ball played through to him when he is running at goal. He hasn’t had a lot of these passes come his way this season and he’s often had to play with his back to goal. Sure enough Barkley plays him that exact ball he loves and he capitalises on it, will this be a lift to kickstart his season? 4 shots, 1 on target, 1 goal, 1 key pass, 2 successful dribbles.

Not a great 25 minutes for Pienaar, had a measly 68.8% pass accuracy, committed a foul and was dispossessed twice. He should start midweek in Lille given his experience in the competition.

Only touched the ball 4 times in the game but had 100% pass accuracy and created 1 chance. Creating 1 chance with only 4 touches is pretty phenomenal. Cannot wait to see what he can do when playing the full 90, possibility he could start against Lille?

2 touches and 1 shot for gibson, again pretty impressive that he gets a shot off having played only 2 minutes and is meant to be defending a 3-0 lead.

My highest team rating this season is definitely deserved, aside from Wolfsburg we haven’t shown that much dominance in a game in some time. Goodison Park should always be a fortress in which a win is expected. We need to keep this momentum going with the next 4 Premier League games being extremely winnable. If you haven’t seen the fixture list already it’s: Burnley(A), Swansea(H), Sunderland(A), West Ham(H). 12 points please Bobby lad.