Traveling to Anfield on Saturday for the first merseyside derby of the year there wasn’t much optimism in our ability to get a result. Everton haven’t won at Anfield in 15 years and hadn’t actually scored a goal there since 2011. With no real presence upfront throughout the game, the only way we were really going to score would be a piece of brilliance. Phil Jagielka of all people was the guy up to the task.

Tim Howard – 6
Howard is giving us all a roller coaster ride this season, some shocking performances and a couple of decent turn-outs. Liverpool had 24 shots in total at Howard’s goal, most of them hopeless shots from Balotelli. Amazingly, Balotelli had more shots in the game then he had successful passes. 8 saves for Howard and he did reasonably well. I felt like he could’ve done better with Gerrard’s freekick as everyone in the ground knew where it was going.

Leighton Baines – 5
4 tackles, 2 interceptions and 6 clearances as well as 2 chances created. Most of the Liverpool attack went down that left side as I am sure they wanted to take advantage of Hibbert who hasn’t seen much league action. Baines did okay but i would of liked to see him contribute more to the attack as we struggled a lot in the final third.

Phil Jagielka – 7
What a goal. What a goal. As long as I live I will never forget that goal. Captain fantastic came up with the goods when we needed him most. Jags has taken a lot of stick in recent weeks but he played a blinder in this one. 3 tackles, winning 100% of his aerial duels, 7 clearances and a 98% pass accuracy combined with his attacking prowess of 1 chance created, 1 shot, 1 goal. Good to see that Kevin Sheedy approved of Jagielka’s wonder goal on twitter:

John Stones – 8 (Man of the Match)
Huge game for the kid, no one would of blamed him if he’d of tried to hide in this game. I couldn’t think of anything worse than playing centre-back away in the derby at Anfield, the thought of it makes me want to hide. Instead, Stones was dribbling past players (3 dribbles), picking out long passes (6/10 accurate long balls). As well as fulfilling his job defensively with 2 tackles , 4 interceptions, 2 shots blocked and 3 effective clearances. Great performance from John, a well deserved MOTM, Stones should be starting all league games with Jagielka from now on.

Tony Hibbert – 4
“You cant fault his effort”. I hate the notion from some of our fans that it’s okay for players to be bad as long as they show effort. Hibbert is simply not good enough anymore, I understand Coleman is out and there isn’t much depth at that position but Browning is an exciting prospect, give him a go from the start. 78% pass accuracy is the key stat here, in this Martinez team you have to be able to pass and be confident in possession wherever you are on the pitch. 78% is the 2nd lowest accuracy on the pitch.

Gareth Barry – 5
Barry had 65 touches in this game, joint highest total on the pitch with Jordan Henderson. 89% pass accuracy with 12 of his 15 long balls on the money. Defensively he held his own with 1 tackle, 3 interceptions and 1 shot blocked.

James McCarthy – 8
Stormer of a game for McCarthy, a whopping 6 tackles, 3 interceptions and 4 shots blocked. He stopped everything in the middle of the pitch. Reminiscent of Lee Carsley on derby day, putting in a tremendous amount of work, breaking up play all over the pitch. He had 91% pass accuracy with 1 chance created. Brilliant performance from JMac he is unlucky not to get his first Man of the Match award of the season. Those defensive numbers of 6 tackles, 3 interceptions and 4 shots blocked is just insane, Liverpool had 7 tackles between their entire team – McCarthy had 6 by himself.

Muhamed Besic – 7
I was not the only one who was extremely worried when Besic’s name was on the teem sheet, aggressive midfielder with no concept of the league on derby day = sending off. Luckily he held his own and didn’t pick up any cards. Really impressed with some of the stuff Besic had on offer, creating 2 chances with 89% pass accuracy and 2 dribbles, bright future ahead for this kid.

Romelu Lukaku – 4
Worked hard defensively and was frustrated going forward, he isn’t getting a lot of the ball at the moment (52 touches). Lukaku fixated with playing on the right wing is starting to annoy me, he needs to play as the number 9 we paid £28m for. This club can’t afford to pay that much for a winger, we need goals from the middle. 3 shots, all on target with 1 dribble and a chance created.

Steven Naismith – 5
Quiet game for Naisy, 1 shot, 1 key pass and 1 dribble but dispossessed 3 times. He needs to play behind the striker and not as the main man, he is so much better at making runs in behind when centre backs don’t pick him up.

Kevin Mirallas – 5
3 passes, 11 touches not a whole lot else. Scary times ahead if Kev isn’t fit for a while, the depth at winger will be very scarce.

Subs:
Aiden McGeady – 5
Came on for Mirallas early on and showed some pieces of brilliance, unfortunately he just doesn’t have the composure to pick out the final ball or finish when needed. He will have to step up as the main winger if Mirallas is out.

Tyias Browning – 6
Wow, what a tough time to make your Everton debut, away at Anfield when the team is already 1-0 down. Browning showed what he is all about and looked really confident in possession with 100% pass accuracy and 2 good crosses. Big respect for Tyias and I would like to see him play a whole lot more in Europa/FA Cup.

Samuel Eto’o – 5
Coming on with 10 minutes to go, Eto’o wasn’t involved in a whole lot. Feel as though he will lead the line away at Krasnador midweek.

Overall Team Rating – 5.73
When you look at it we probably didn’t deserve a point in this one and we’d of all expected a loss when Gerrard put them 1-0 up. To get a draw is a great achievement considering our record at Anfield. I am hoping this is a turning point in our season and we can push on from here. For those of you who missed it – Gerrard’s face after the game is priceless, hahaha. 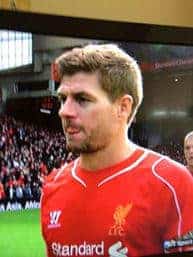 Interesting facts:
1) Tyias Browning is only the second Everton player born in the city to make 1st team debut in a derby match – 1st Ted Taylor in 1927.
2) Jagielka joins Kevin Ratcliffe as the only Everton skippers to score from outside the box at the kop end.
3) Tony Hibbert’s start against Liverpool means he will have played for Everton in 15 seasons, equalling Brian Labone’s club record for an outfielder.