Well what to say?

High flying and feeling fine kick off your shoes and let’s blow our minds together.

Maybe that covers it? I’ll pipe down a bit as two wins hasn’t really made me feel all that but it’s a welcome relief for a team that hadn’t won a pre season or competitive game for a while.

And what a win it was. Everton were sleek, composed and most of all: absolute monsters when it came to finishing the opposition off. The best types of Everton that.

It was vitally important that we got off to a good start at home in the Europa League as there’s three very capable oppositions to face and points & goal difference will be cut throat. As I’m a sucker for an analogy I want to take that further and say that Wolfsburg was the hostage and we were the one with the knife on top of the sand dune. We sent our message not to George Bush but to the approximate seventy-four other people watching the highlights on Eurosport News: Everton are back baby.

Obviously there shall be repercussions and I seen enough from Wolfsburg to know that if one of them can remember how to finish then the return fixture will be no easy thing. But we’re not here to talk about European affairs as we’re back to the nitty and the very gritty of the league this weekend as Neil Warnocks’ Palace Grockers arrive in town looking to pull our pants down twice in quick succession.

Again, rather annoyingly, there’s no real bad words to say about Palace as they’re sound. They are also riding a huge wave of goodwill on the majority of match going Merseysiders due to their destroying of the Istanbul myth in a three goal comeback that finally slayed the most horrid title chasing kopite beasts in May. Can I put gifs in these previews? If so then I’m launching a new feature and it’s entirely in their honour.

To commemorate a great day in the history of good prevailing over bellwipes you may notice that this preview is a limited cut out and keep edition of that very day. I hope you’re feeling the love, Palace lurkers.

Some stuff has happened since then with Palace apparently hitting the self destruct button – a particular button we know so well – and their bright old manager quitting on the eve of the season when it looked like they would continue to bloody the nose of the complacent. A wonderful thing to have in the Premier League because of the adverse reaction from many of the legion of utter pube Managers residing in the division. And in came Neil Warnock and a collective sigh was given by the Palace fans expecting the worst. At present they are sat winless on two points from four games. Before we feel too superior, they will be sat on the same points as us if they repeat their win at Goodison like last season. And what a good win it was, plenty of claps going off too as they deserved it.

Hardship and heartbreak does wonderful things to a football fan. It levels those with notions of superiority, makes you develop sincere empathy with others suffering poor fortune/crap teams and importantly makes any success all the better when it does occur as you’ve endured the hard stuff. I can’t be too woe is me as Everton haven’t been relegated since man thought the moon was made out of cheese and many of us have been lucky to witness all conquering Everton sides domestically and in Europe. Palace have suffered hardships and as a result have a grounded bunch of sound fans if not veering a little too much towards the ultra side with their zany passionate support for their team. Just tone it down a bit lads, it’s a bit too Play up Pompei (!!!!!!!!!!!!

Onto the team they’re likely to play then and it’s mighty nice to be able to rip information off their fan sites (compared to the Germans midweek) and present it to you as though I know my onions.

They’re likely to play 4-5-1 and flood their midfield with tough to surpass options and breakaway speed on the flanks. Up front world record holder of the most different styles in just one haircut – Chamakh – is struggling with a hamstring injury so is doubtful therefore it’s likely Gayle will start up front on his own, he’ll work hard and run channels like a Marcus Bent tribute act. Compliment that too.

Midfield is where they do have variables so I’ll try an approximation. New signing James McArthur from Wigan, often confused with our very own James McCarthy when at Wigan because of the way wools pronounce McCarthy (try it and see), may start behind Gayle as the attacking hub of their midfield. Zaha and Puncheon are the lightening quick very offensive wide men where much of their threat will come from. They will look to take advantage of our fullbacks bombing on so our central midfielders covering will be as important as our central defenders in nullifying their threat on the break.

Deeper in the midfield we are likely to find the effect and under rated Jedinak and then either Joe Ledley or that Barry Bannan lad. 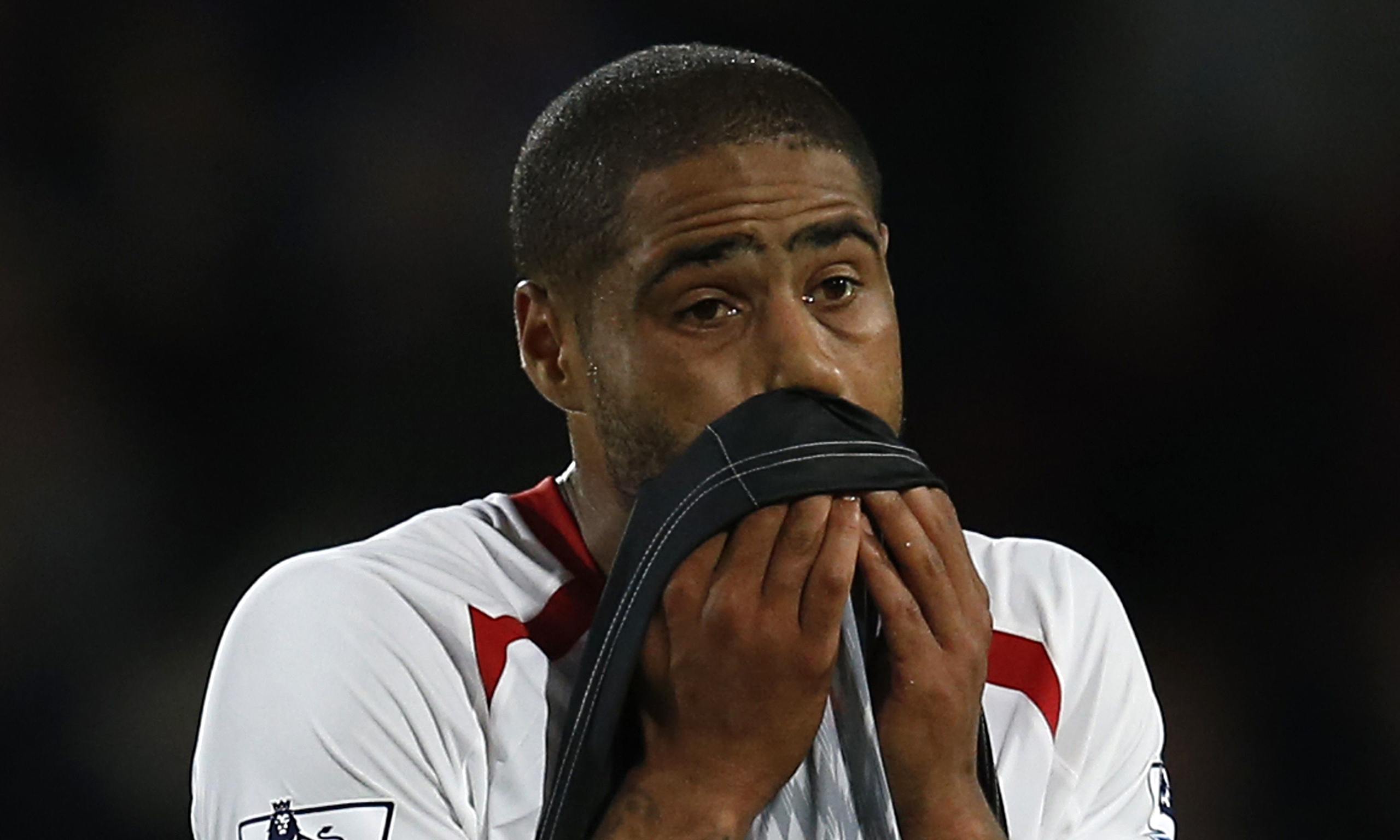 Defence should be Delaney and weasel faced kopite Scott Dann in the centre and a really useless collection of average full backs like an Everton side in the nineties means I have literally no idea who will start there, but I know that we should molest them at will. I also know that gayest Beadle bearded Speroni will play in goal.

I don’t want to get too confident as we still haven’t hit anywhere near our fourth gear but there’s not a lot there that should concern us.

Challenges may stem from there being a big possibility of rotation for this game considering the same team started the previous two games in the week, which makes for a high likelihood of changes for us.

To counter that negativity, I was thinking that seven games in twenty three days will also benefit us and our inconsistent/unfit start to the season, as more players will get a chance to get some serious minutes on the pitch and at the end of it we should have a good idea of who our current best XI is.

And then Ross Barkley is back into the fold too. Nae bad.

Lukaku is having an inconspicuous start to the season which hasn’t gone unnoticed to a few beauts in the stadium seemingly embracing it as an opportunity to shriek about how lazy he is at every opportunity. Sound that lads.

It does however open the door for someone else to come in as he struggles for form. It was a nice moment at Goodison on Thursday where Everton went through the gears, and then when Everton were in fifth we casually dipped the clutch and brought Samuel Eto’o on. How boss is that? I reckon he’ll start.

Behind him four goal Naismith has been on the go and no need to reference how well he’s playing other than to say Barkley coming back in isn’t necessarily a shoe in, he is however one who may be due a rest. Osman you cry? No, you didn’t cry that at all, but it’s likely.

Pienaar should make the bench but not the first team so it’s a decision to stick or twist for Martinez in the wide areas. It would take a brave man to drop Kevin Mirallas right now as he’s simply our best player. He’s got the bit between his teeth and that finish was icier than Alex Salmond’s brow against Wolfsburg. McGeady was in meh mode so I wouldn’t rule out Atsu making an appearance, lest Chelsea moan about his not giving him play time.

Hang on a minute, a massive daddy long legs has just entered the room and is head butting the lamp with a bit too much gusto. Barry and McCarthy were improved but will need a rest at some point. Besic and Gibson (great to see him back on the pitch and as lean as we’ve seen him) are credible options but who knows? I thought one of them would get a game from the start this week but they didn’t.

Wolfsburg got behind us a bit too often for many’s liking and often from wide areas. We are prone to this having such attacking fullbacks and it’s a concern not for the defence but for the central midfield slots, we have to tighten up a bit before another opportunistic punishing a-la-Chelsea. On saying that our best pairing at the moment is Jagielka – who was much better this week – and John Stones who I happen to have an admiration based crush on. He just makes the game look far too easy, and played Olic far better than anyone of his age should have. He was first to most loose balls in the box and is vital to the way we play from the back. His progression will be charted in minutes played on the pitch and the amount of effortless silk he projects on those attackers who seek to smite us. He is the sex.

Another victory for ace full backs on in the Europa League as Baines assisted two and scored one and Coleman scored another. It’s not that we would take them for granted but when we are back to the run of the mill full backs that we are prone to I will miss them more than fresh, thick bacon in the USA. The fat around the edges obviously a little browned. Baines and Coleman are one of if not our most valuable assets in how we play as a team, long may they and their understudies prosper. Howard has a good game didn’t he? Good decision not to rotate in that position from Martinez or this preview would be a tad less optimistic.

The optimism is still clipped because as I mentioned above I still don’t think we’ve got going yet. Great to see us be dead clinical like all the top teams have but the midfield and central defence have yet to become as dominant as their talented personnel makes them capable of.

This Palace game precedes a League Cup away game to Premier League opposition just 48 hours later and then a key derby at the house of many bells only four days after that. It’s preferable to go into such games on a winning run as he gives everyone that wee extra glow in the squad and the magic just then happens, rather than being forced. Like playing pool after three pints. That sunshine step you’ve had since last night is a temporary thing on loan – property of L4 – but if we keep doing more of the same then before too long we will have a full flying Everton for our viewing perusal.

I want it right now.

Be-cause in my world there’s only you.