Not long to go now. And good days to be an Evertonian. For now like.

“We are ambitious, we want to be successful…”
Roberto Martinez

“Our ambition is to become one of the best in the country, to challenge the big four.”
Romelu Lukaku

Everton have dropped the knife and picked up the Kalashnikov, to tire out an already very tired analogy.

No, it doesn’t get much better from here so save yourself the trouble is my advice. 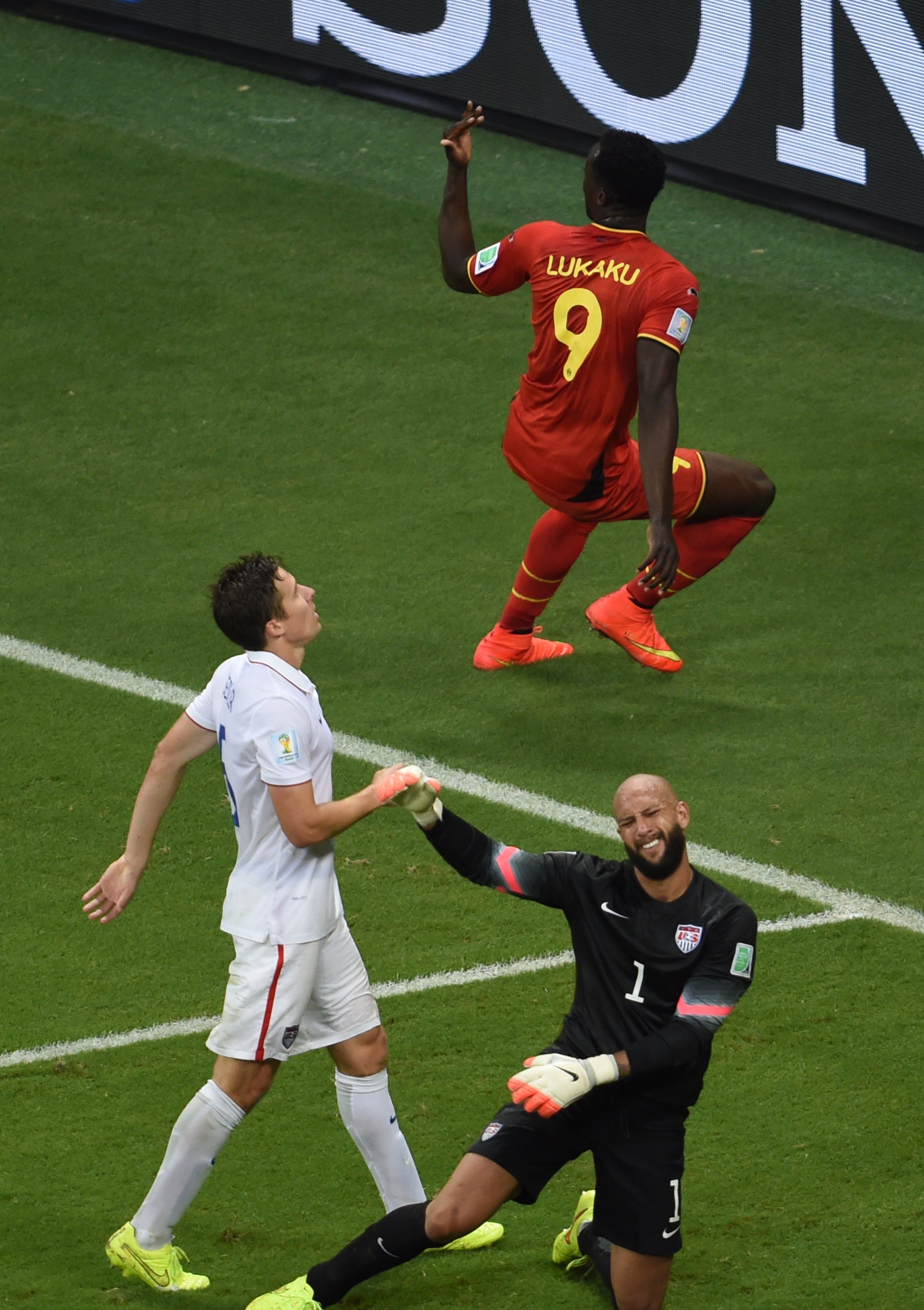 What much is clear in the positive good feeling flowing throughout the club right now, permeating from manager to players to staff to fans and hopefully to reverberate onto the pitch against whichever unlucky tits are unfortunate enough to share the same pitch as us.

A generation of absolute crud, misplaced hope and false dawns has seen many err on the side of scepticism when it comes to our most beloved – myself included – and that can’t be shaken off too easy. Not until we actually win something – which has been far, far too long for a club with our history.

There’s been stagnation and then renewed hope, then crashing reality, pragmatic pride and frustration at perceived glass ceilings.

With the finances and set up of the current game, that glass ceiling doesn’t mysteriously disappear away by us breaking a transfer record which is a fraction spent of those we are hoping to emulate, and hopefully one day not too far away, better.

But you can feel the good things around the club now, so there’s understated hope around Everton FC. But more of that hope thing at the end.

As is customary, it’s deemed respectful to nod at Moyes for this current generation Everton team. He built the foundation on which one man is pushing us admirably on from. But that same Moyes frustrated us by talking us down, using us as a stepping stone and then committing the most deadliest of all sins for an opposition manager: trying to buy our best players on the cheap.

The last time I can remember the same sort of aspiration for an Everton team was the 2009/10 season where we envisioned a midfield pairing of Fellaini and Arteta doing all sorts of naughty to the teams in the league this year. It lasted until Howard had a brainfart and Blackburn Rovers induced a miserable first half of season which was too often a headache for us.

Feels a bit different now. And there’s one man mainly behind it all – Roberto Martinez. But you knew that.

From the first press conference in a debatable grey suit and revelations of getting into the Champions League he’s grew with the club as well as one could hope. Not just the leaps we made last season but the little touches in genuinely learning the club, it’s traditions and importantly talking the talk as any Everton manager has the right to. Everton are still quite a big deal, despite what the Mirror wants you to believe.

The players, and lots of them loyal to their previous manager, have bought completely into his style of play and ways. It showed in the football, it shouted loudly in our fast counter attacking, it screamed at pushing for more goals when we were a goal or two up.

There were some symbolic stages of development – kicking on from a much needed first win at Chelsea, the first half destruction of Newcastle, Old Trafford, The Emirates, a new contract for Leighton Baines and finally a seven game winning running peaking in wins against Arsenal and United almost effortlessly at home. The School of Science was on it’s way back.

In a cautionary tale that you’ll wisely skim over – there was plenty having a go at Martinez/Everton/Sir John Moores for not splurging out on a striker in the January window. In all the hallmarks of short thinking football fan ideology. If that would have happened then Romelu Lukaku would not have just signed permanently for Everton.

Instead we thankfully had a manager who has a plan not just for the short term but the mid and hopefully long term too. It’s the kind of prudence that a club of ours not so much needs, as demands if we’re to have any tangible success. Never mind just hanging on in there near the top of the table.

In the summer we’ve seen Martinez quietly go about his transfer business. Player of the Season Coleman was very happy to deservedly sign a bumper long term contract. In came Gareth Barry wanting to turn the vacation into a permanent thing. Besic was eager to join amongst other options on the table and in doing so added some real depth and options in the centre of the park.

This week seen debatably the most talented young footballer in England (Lukaku’s words not mine) secure his long term future at the club he grew up supporting, and then we have smashed our transfer record to bring a very talented young striker to the club on a permanent basis in Lukaku himself.

If you watch Everton’s goals from last season, and you can do this in beautiful HD by clicking here, then you may notice a couple of things – the most obvious being that we scored some truly tremendous goals during the whole season from a multitude of different players. I noticed a great deal the contribution of Lukaku to not just the overall tally of goals but important goals at crucial times of the season. Put simply, he scored a lot of goals that turned the game or was directly the the winner.

In the evolution of any side from absolute crud to really boss there are stages and the first one is getting solid at the back and not conceding goals. That will at least guarantee you some draws where perhaps you were losing prior, so it’s an extra point gained. The big jump is turning draws into wins as that brings the bounty of an additional two points and separates the best from the rest. Lukaku gives us just that very thing. Never minding the spin offs of the statement Everton put out in spending big to secure a crucial player – it will in turn act as a gravity to the better players at the club sensing the club and manager’s ambition, but also attract good young players as Everton is increasingly seen as a great place to play good football, particularly if you’re young and ambitious. And who isn’t young and ambitious?

On a side note with Lukaku racing Pienaar back to a full head of locks he is currently about to enter the Andy Gray 84 stage of hair development, if you look closely.

You are well versed in the nature of our current squad so looking through it sees options in pretty much every position, and real quality who on their day are some of the genuinely better players in the division. Many teams would covet Mirallas, Coleman, Baines, Jagielka and McCarthy. Throw in a crop of decent young lids coming through and it brings a warm fuzzy feeling inside.

So that’s why we’re a bit excited. And because the new season is on the way and Everton are a bit boss.

We are not going to win the league this season like. We will probably conspire to dick it in the cups. And would any of you be surprised to see an injury list akin to an NHS walk in centre in any given wool town on a Saturday night?

That’s not important. What is, is that Everton are going to have a real go at attacking teams next season with some sound players. We are going to play some football that tips it’s cap to some of our best teams that played on the very same piece of lush Walton land before them.

We are going to go for more goals when we are two up. There will be an ace young blue scouse lad pulling the strings, living all our dreams. We are going to play in Europe and unlikely to fall short against the first half decent team with tactical nous we face. Sack that, they will know our name by the time we’ve finished with them.

And it’s coming your way real soon. So even if in ten months from now we are still one year on without winning anything. Or not qualified for the Champions League. It doesn’t really matter, because the following year we are going to be even better. And one year older, smarter, wiser and nastier to the opposition.

Sometimes the anticipation of a boss Everton is better than the Everton which really turns out. So it would be prudent to enjoy it before that fat whopper Taylor-Fletcher seals our disappointing first game of the season by wrapping up Leicester’s second in injury time.

So more of that hope thing I promised earlier – not the young lad running round in pre season up front (and someone tell him he looked miles better with a skinhead) but the real hope thing.

Andy Dufresne put it best in his letter to a Red when he said “hope is a good thing, maybe the best of things, and no good thing ever dies”.

It’s a bit bollocks really but I needed something to end yet another too excited piece of pre season optimism. A bit arl arse too as Andy knew full well that old Brooks Hatlen hadn’t exactly bought into his belief. But I suppose when you’re trying to lure someone to a white sand beach in Mexico then you can get away with fluffy statements like that. And it worked.

So there you have it. See you in two weeks.