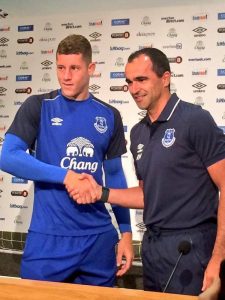 Ross Barkley has agreed a new 4-year-deal at Everton.

Ross Barkley: “It means everything to me. It’s a dream playing for Everton. As soon as I got told about it I wanted to sign. During the seasons of my new contract we want to push on & get into the Champions League. You’ve got to have aims.This is the club I Iove

I knew what it meant to me when Rooney left. We were all down. I know how the fans felt. Now I want to help us push on”

Bill Kenwright commented: “Everton and Ross have always been the perfect fit – Roberto has made it even more special. This was an important agreement and, I have to say, was conducted in a way that showed clearly the devotion to Everton Football Club of everyone involved.”

Roberto Martinez: “Ross Barkley brings back the memories of the big players and the legends we’ve had at this club and there’s more to come”