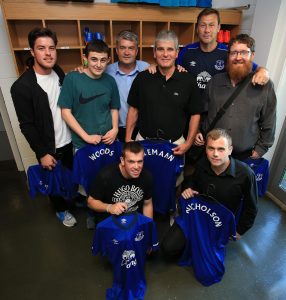 A group of loyal Evertonians became the first people to own the 2014/15 home shirt on Thursday when they were taken on a Finch Farm tour by two Blues legends.

The supporters, who have been Season Ticket holders for over a decade and who supported Roberto Martinez’s side at every single home and away fixture during 2013/14, were welcomed to the Blues’ training ground for an exclusive tour by Ian Snodin – and were left overwhelmed after receiving the special surprise.

As the group were taken behind-the-scenes, Ferguson emerged from the boot room with a brand new home shirt for each fan with their surname printed on the back.

Stewart Nicholson from Wirral said: “Following Everton is my life and Duncan is obviously one of my all-time heroes. To meet him just means everything. I really like the shirt too and to get one from Duncan just topped it off.”

George Friemann, who has followed the Blues home and away for many years, added: “I can’t believe I just met Duncan Ferguson. I’m pretty much speechless! It’s great that the Club did this and nice to know that as fans, we are appreciated.”

The classic royal blue jersey received high praise when it was revealed in June as the first kit since Umbro became Everton’s new technical partner.

To mark its release, the Club and Umbro launched a campaign to celebrate those who form the Fabric of Everton – from Roberto Martinez to Graeme Sharp, skipper Phil Jagielka to Everton Ladies’ captain Michelle Hinnigan, and kit manager Jimmy Martin to the Club’s oldest living player, Tom Gardner.

Now, it’s the turn of Evertonians. 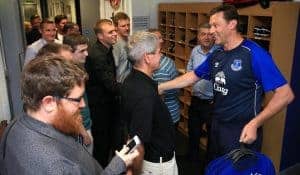 Ian Snodin said: “It’s the fans who make this Club so special and hopefully evenings like this prove to them that they are the fabric of Everton.

“It’s a massive commitment to support your team week in, week out, but that’s what these fans do and they should be recognised for that.”

With over 130 Evertonians holding a Season Ticket for ten years and attending every single away game last term, the lucky group were selected at random to make the trip to Finch Farm.