“I said at the beginning of the season we’d finish 7th. I thought that was where we were looking to be, but to be looking at 5th, and having had a chance at a Champions League place is fantastic. If we can raise our games for the Manchester United and Arsenal games but not Crystal Palace and Southampton, that’s where we’re going wrong. But to be where we are and have our record points total in the league is nothing short of amazing for me. I think what they’ve done this year hasn’t been exceptional, but very good with the chance of going on to be better.”

Throughout the season one of the main things that people have picked up on, in particular a certain Mr. A. Wenger and the Daily Mail, is our use of loan signings. It wasn’t an issue when we had the likes of Royston Drenthe or Denis Straquilursi but because of the high league position we’ve sustained this year and the success of our loan players, it has been one of the criticisms of the club. What does Derek make of the issue and the players we’ve utilised this season?

“People have moaned about us having all these loan signings but the system’s there to be used. We haven’t abused it, we’ve used it.” 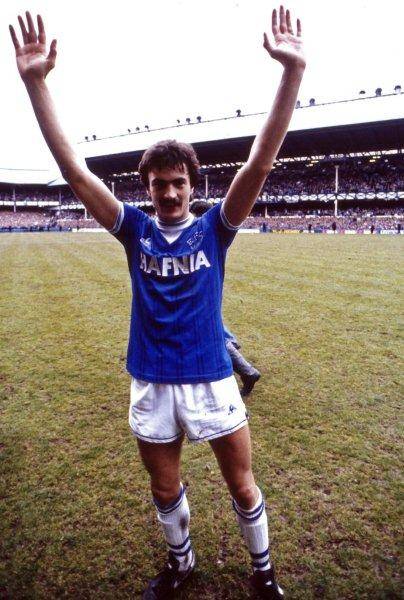 He continues; “Gareth Barry’s been immense and I’ve known him for many years, he was a quality player at Villa. Lukaku needs to learn to be more aggressive for me. I think he needs to be getting into centre halves and give them a bit of a dig in the ribs, and Deulofeu is still very, very young. He’s got a lot of learning to do. But to all those people saying we used the loan system, what about the likes of Howard, Coleman, Jagielka and Stones? They’re in the team every week and it must be a bit of a kick in the teeth for them.

“There’s only really two loan players in the team every week and that’s Barry and Lukaku. Deulofeu has been a bit of a bit-part player so all those other players must feel a bit annoyed that they’re not given the credit they deserve.” This time last year, the future of Everton seemed difficult to predict. Many people expected a mid-table finish this season while others spoke about us being potential relegation fodder, but they couldn’t have been much further from the truth.

“If I look back at this time last year when Moyes was leaving we were all a bit concerned who was going to come in and I looked at both Martinez when he came to Everton and Moyes going to Manchester and both of them were going to bigger clubs with bigger expectations, bigger budgets but more importantly bigger egos on the playing side, and I think Martinez has handled it all superbly this year. Everything you hear coming out his mouth is positive, and positivity breeds more positivity and breeds expectations higher than there was under David Moyes, and no disrespect to the man but there wasn’t much positivity there.”

One of the main areas that people have compared the two managers in is the positive mentality that Martinez has imposed on the whole of Everton Football Club, from the players to the fans. David Moyes admitted to taking the team to stadiums like Old Trafford and trying to ‘get out alive’, whereas Martinez goes to every stadium with the aim to win.

“If you look at any player that comes into the side, they never look worried or flustered or in awe of the situation. I think sometimes players came in with David Moyes and they were too bogged down with ‘you’ve got to do this and that’ and they looked nervous, but they’ve come in under Martinez and they’ve looked free of all anxieties. Just look at John Stones, the last 12 games he’s been getting stronger and stronger and it just shows that the confidence coming out of the manager is going into the players.”

Now that the season is over and we know we can now expect the added pressure of European football, it’s over to Martinez again to decide what areas of the squad need improving and where we can start laying foundations for the next season and beyond;

“Long term the manager will have been identifying targets over the season and got his ideas of what he wants to do. If Lukaku stays he’s going to cost an awful lot of money, and then do we need someone alongside him?” He continues; “If we don’t get Gareth Barry he’ll be a massive loss to us. I think James McCarthy will say he’s learnt so much from working with Barry for the last 12 months. He’s been brilliant and I must admit I’ve been very impressed with McCarthy too as the season has gone on. From what I’ve seen he’s got better and better.”

Looking back on the season, there have been several players that have stood out as being potential candidates for Player of the Season, but I wanted to know who would get the award if Derek had the choice and why;

“I’ve been very impressed with James McCarthy; he’s got better and better. I’m very impressed with Coleman, and Stones has been out-standing but it’s the core of the team you look at. You’ve got the experience of Tim Howard, who’s had a really good season. For Stones to play along Sylvain Distin, for him must be brilliant, but now when Jagielka’s fit, is it Distin and Jagielka? Distin and Stones? Mar-tinez has got a big choice to make.”

He concluded; “Player of the season for me would probably go to someone like McCarthy or Coleman because they’ve both developed. Coleman’s come on leaps and bounds in the last few years. With McCarthy I was a bit unsure when they signed him for the best part of 13 million but I think he’s done really well this season and got stronger and stronger.”

On the World Cup;

“You go in there as one of 32 teams and you go there with so much hope. We’ve got a nucleus of really good players. I don’t know if Roy Hodgson’s going to go with experienced players or be brave and go with one or two younger players because we’ve got to look to the future now. No disrespect to the likes of Steven Gerrard and Frank Lampard but they won’t be around for the next World Cup so why don’t we take a few youngsters and give them that chance of being around it. Can we win it? Personally I don’t think we can but you never know in football. It’s a funny old game and all you need is a few strange results which you’re going to get in the World Cup. If one of the little minnows gets a point or beats a bigger team, it’s all wide open. It’s going to be difficult for them out there because of the conditions but it’s how we react and prepare as a team, but to win it? I can’t see it. To get the group stage? I would hope we would but it’s never easy. Whether it’s the Euro’s or the World Cup, once you get in the knockout it’s a cup final every game.”