It’s a testament to the quality of Everton FC’s backline that Phil Jagielka and Leighton Baines were not only picked for Roy Hodgson’s squad but will undoubtedly be his first choice centre and full back.

Only earning his first international cap last summer, Ross Barkley has come on leaps and bounds. He’s hotly tipped to light up the summer tournament, and any Everton fan will be hard pressed to disagree!

The Belgian football team are affectionately known to their fans as the Red Devils, but pundits have more recently called them Dark Horses. With a squad with depth, talent and goal scoring capabilities it’s easy to see why. 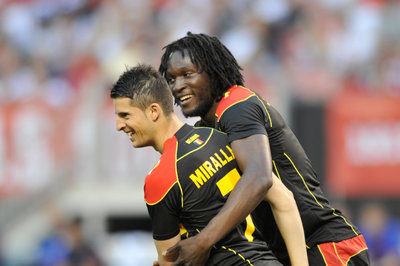 Representing Everton is the much-loved Kevin Mirallas. The speedy winger has racked up 9 goals in 42 games for his country and has been the source of many more.

Former Blue Landon Donovan was recently excluded from the USA’s World Cup squad. This caused much controversy and whether Jurgen Klinsmann’s decision was based on age or something else remains to be seen.

However, Tim Howard has certainly not been overlooked. Even though the 6 foot 3 New Jerseyan is 35 years of age! He’ll still be one of the main players in securing any success for the United States in the tournament this summer.

Some on the Everton squad would have more than likely shone bright this summer but due to injury are missing out on the chance at the world stage.

Still to win over many of the Goodison faithful due to injury is Arouna Kone. However, it’s difficult to argue his ability with 9 goals in 39 games for country and 13 goals in the Premier League. It’s a shame he won’t play this summer, but every Everton fan should be eagerly awaiting his return to match fitness.

The most heart breaking exclusion from this year’s World Cup is Bryan Oviedo. The Costa Rican team and fans will sorely miss Bryan, but again there are high hopes for his triumphant return to English football in August.

Are there any Everton players you think should have been included in their country’s squad? Comment below with your thoughts!