Europa League Still on the Horizon

Some may say that the race for fourth is well and truly back on!

All Evertonians know that Roberto Martinez is an optimist, spending the recent weeks insisting that a top-four finish is not beyond Everton’s reach – leaving many football pundits sniggering and constantly putting the team down. But let’s just take a look at the table shall we… 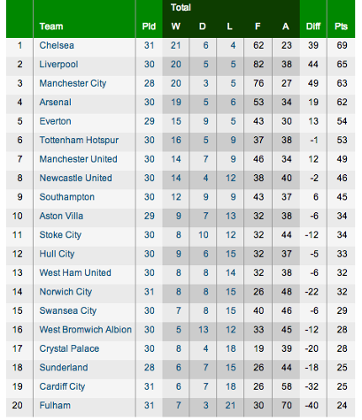 We are right in the mix for a Champions League qualification slot. Although many Evertonians (myself included) think fourth spot may prove too hard to reach. Arsenal crumbled at Stamford Bridge in the early kick-off losing 6-0 to Chelsea, meaning the Everton players took to the field against Swansea knowing a win would narrow the gap between ourselves and Arsenal to eight points! Remembering also that Everton have a game in hand and still have Arsene Wenger’s side to play at Goodison in a fortnight.

Leighton Baines scored the first-goal of the game getting his penalty spot on! His penalty a typically clinical spot kick, maintaining his record of scoring every single one of his 12 Premier League penalties and today was his 16th successful penalty for Everton overall. The back four sure provided the fans with too many nervy moments this afternoon so the defence needs to tighten up if we are to gate-crash the top four. Tim Howard made some tremendous saves to keep Everton in-front.

Although John Stones is clearly a player of immense promise who clearly has a huge future ahead of himself at Goodison, I can’t help but feel the return of Captain Phil Jagielka will help steady the back four more.

Before the game we all like to have our say on who we think should start the game – sharing our thoughts on Twitter and we’re all guilty of perhaps having a little moan and groan now and then when we don’t agree with Roberto’s choices.

However most fans had a little feeling today that Ross Barkley and Aiden McGeady would start and they responded with impressive performances. Barkley got himself on the score sheet as well scoring Everton’s third of the day. McGeady impressed without a goal though earning the corner for Barkley’s goal and left the field to a deserved standing ovation from the fans when he was subbed in the 85th minute.

Surely their performances will leave Martinez with a selection headache on Tuesday when we travel to Newcastle as it will be harsh for either of them to drop to the bench.

The win today gave Everton a hat-trick of wins against Swansea City this season – two league victories and an FA Cup win. Gary Monk and his side certainly did make us work for the three points and the Welsh teams concerns near the bottom of the table continue.

It is four years since Goodison Park last hosted competitive European football and today’s win took us above Tottenham into a Europa League spot.

It was far from vintage Everton – but let’s face it, it wouldn’t be Everton without the panicky moments would it?!

Maybe we won’t get fourth – but fifth is certainly a possibility and it would be great to be going to Goodison Park on a Thursday night to watch the Blues under the floodlights.