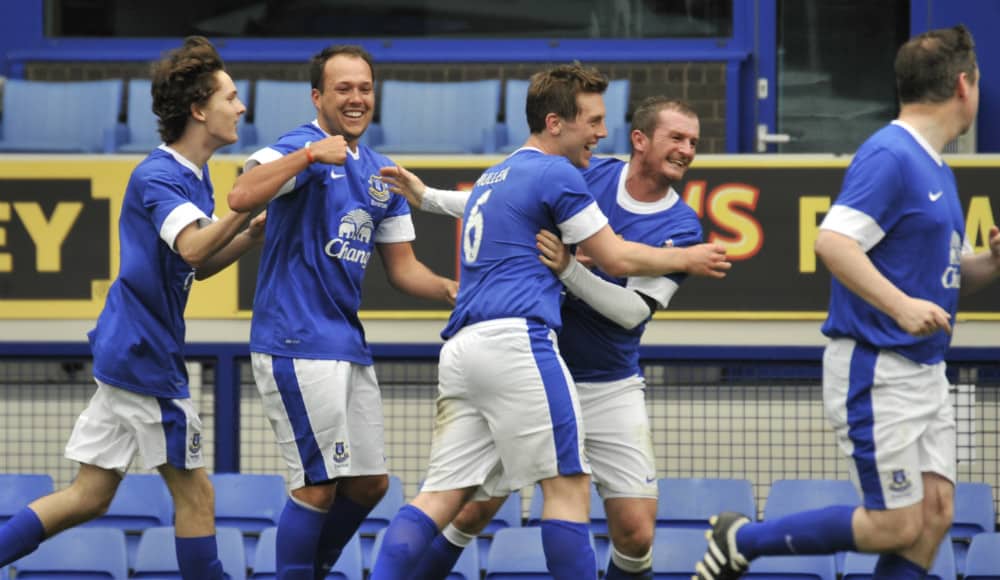 Due to the expected popularity of 2014 Football Aid, Everton in the Community is delivering an urgent message to those Blues that are desperate to grace the Goodison Park surface.

Now in its 13th year, Football Aid has given the chance to over 13,000 football fans to live their dreams in more than 500 matches.

Teaming up once again with the Club’s official charity, the annual event grants countless Evertonians the chance to stand alongside their heroes, on the same turfed once home to Dixie Dean, Alex Young and Alan Ball. This wonderful package includes exclusive access to the pitch and tunnel areas, putting on a personalised shirt in the official changing rooms, before stepping out on to the famous grass to play for the Blues.
Every penny raised will be to the benefit of Everton in the Community as well as projects nominated by Football Aid´s parent charity, Field of Dreams.

Famous Club names to have been part of Football Aid have included 1995 FA Cup Anders Limpar and Matthew Jackson, as well as Football Aid Ambassadors Pat Nevin and Stuart Barlow, who have all lent their support in making the occasion that little bit more magical.

Speaking of his Football Aid experience Everton fan Alex Lewis, who played in last year’s tournament, said of his experience:
“It was an amazing day, you truly feel as though you are following in your hero´s footsteps. The service they put on for all players and guests is incredible.

“It is the ultimate football fan experience!”

Positions are now available in on an auction bidding basis, but securing a position couldn’t be easier. Simply visit www.footballaid.com, choose the Everton games which will then provide you with two options.

Option 1: Bid to Play. Enter your Maximum Bid and if you´re the highest bidder when the position closes you´ll win your place at the School of Science.

Option 2: Buy Now. Close the auction early and secure your place with a one off online payment.

Positions close at regular intervals until Tuesday 12 March with opening bids starting from only £170.