The new Everton away kit for the 2011/2012 season has now been revealed, as Fans’ favourite Jack Rodwell unveiled the striking new amber and navy kit at Everton One today, Thursday 5 May.

The new classic looking strip, comprising an amber shirt with navy trim and navy shorts, reverts back to the traditional colour for Everton away kits and takes inspiration from the club’s iconic strip from the 60s. Sure to become a firm favourite with fans, the new 2011 / 2012 kit incorporates the club’s heritage, while being innovative, exciting and fresh.

The team will step out in the new kit for the first time when they take to the pitch against West Brom for the last away game of the season on 14 May. 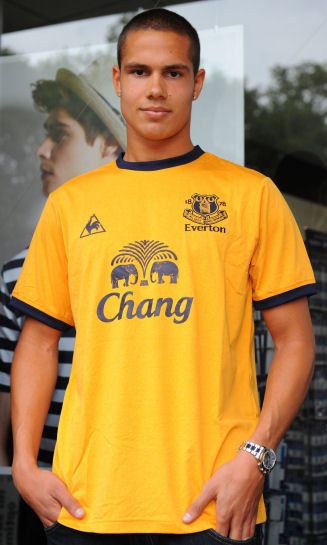