Andy Green from ´the andersred blog´ has been in touch to share his impartial analysis of Everton´s 2009/10 financial results.

Everton are a well run club. There has been no unsustainable "living the dream" at Goodison. The club typically sells to buy players, has had the same well respected manager for nine years and has an active and successful youth set-up. Despite all this, the club struggles to compete financially with better resourced teams and has seen its debt rising steadily year after year. TV income has been securitised (borrowed against) and the club also has bank debt.

The fact that a well supported, prudently managed club like Everton, one that has seen moderate success in recent years, can still find itself under financial pressure during this era of huge TV deals speaks volumes for financial issues in top level English football. 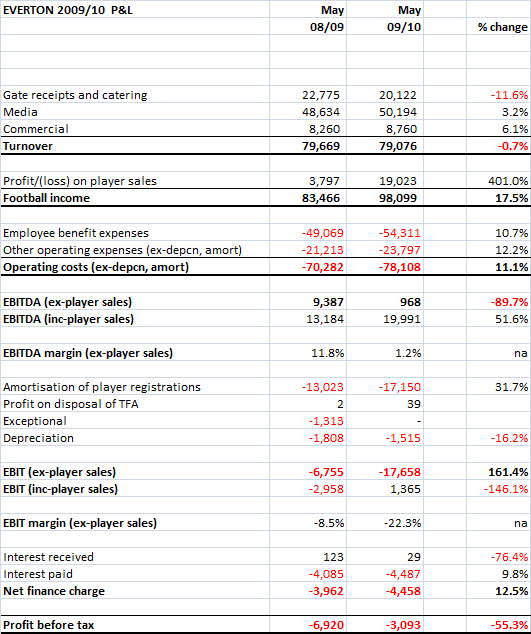 Like almost all the Premier League clubs that have reported results for last season, Everton´s income is not really growing (the exception is City who have an uncanny ability to do commercial deal with companies owned by Abu Dhabi). Turnover was down 0.7%, caused by an 11.6% fall in matchday income. The club played 26 home games in 2009/10 compared to 23 in 2008/09, but the prior season included the club´s successful cup run (and thus receipts from the FA Cup Prize Fund and gate receipts from the semi-final and two away ties).

On the cost side there was a depressing familiarity to the results with wage costs rising 10.7% and other costs (ex-depreciation and amortisation) rising 12.2%. Of the seven PL clubs that have reported figures for 2009/10, only Spurs have managed to grow income faster than wage costs. The chart below shows how much wage growth (in percentage terms) exceeds revenue growth (in percentage terms). It is clear that Everton are seeing some of the greatest cost pressure relative to income growth. 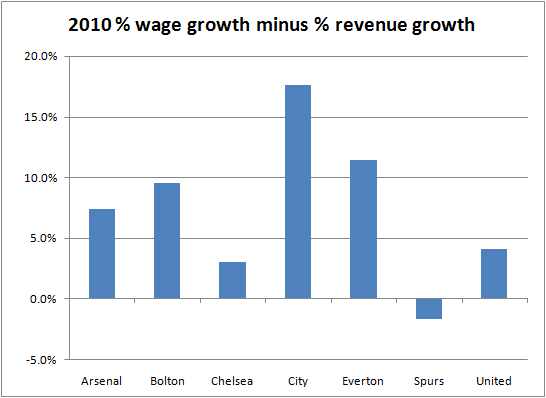 The cost vs. income squeeze at Everton caused EBITDA ("Earnings before interest, tax, depreciation and amortisation") to fall from a reasonable £9.4m to just under £1m. That´s an EBITDA margin of only 1.2%. The club made a profit of £19m on the sale of Joleon Lescott to Manchester City and this caused the pre-tax loss to reduce from £6.9m in 2008/09 to £3.1m.

To understand the problem Everton has, we have to look at the cash flow. As described above, EBITDA (cash profits) were very low as wages and other costs grew rapidly. Operating cash flow was only £1.4m, but the club had to pay a net £4.5m in interest on its securitised debt, bank debt and overdraft. This meant the club was already cash negative before any investment spending. [Please not in an earlier version of this blog the entries for player sales and purchases were incorrectly labeled.] 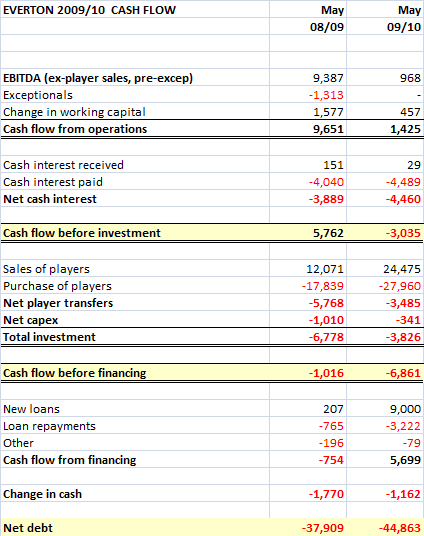 Net player capital expenditure was only £3.5m, reflecting the "sell to buy" disciplines imposed on Moyes by the board. Other investment was tiny (£0.3m), but there was still a cash outflow before financing of £6.9m. The club is paying down the securitised debt over 25 years at a rate of £2.8m per annum. With the club not generating any cash, the club is effectively having to add to its bank debt to repay its securitised debt. In total, net debt rose £6.9m over the year to £44.9m.

The future – a buyer and a new ground?

There are really only two routes out of Everton´s financial cul de sac, a new owner with deeper pockets than Bill Kenwright and the current board and/or a new, larger stadium.

Each home game only brings in revenues of around £750,000, way below the "big" clubs who earn £2-3m per home fixture. The government rejected Everton´s plans to relocate to a 50,000 seater stadium in Kirkby in 2009 (a plan opposed by many Evertonians). There have been talks between the club and Liverpool City Council about alternatives sites within the city, and there has been some talk of a potential groundshare with Liverpool as and when a new ground is built in Stanley Park. Not only is Goodison too small, it lacks the corporate hospitality facilities needed to generate significant matchday income. Income per available seat was only £19 per game in 2009/10 vs. £30 for LFC (2008/09).

Kenwright has been looking for a buyer for the club for some time, and commented in these results that he was working:
"Tirelessly to find that rich and generous benefactor."
Until Everton secure a new and bigger ground or that elusive "rich and generous benefactor" it looks likely that they will struggle financially. That such a well established, prudently run club with the eighth highest attendances in the Premier League is struggling like it is, tells us much about the finances of the modern game.