Lanolin said:
Can’t get my head round people who’ve spent the whole summer banging on about getting midfielders in suddenly deciding we don’t need them anymore because of one injury. Nothing has changed, we needed to address the midfield and the attack and we still do.

I know virtually nothing about this lad but on paper it’s exactly the type of signing we need to be making. It would also make the signing of gueye make much more sense. Those two and a decent striker and this starts to look like much more like the window I was hoping for.
Click to expand...

It will sound a bit snidy and it's not meant to be, but I think sometimes people just want to have a moan.

Tarkowski- Hes too old
McNeil- Hes not old but hes from Burnley
Vinagre- Only signed him because he played for Wolves
Gana- No sell on, too old
Onana- Young, not from the PL, no connection to Burnley/Wolves- why arent we buying a striker.

Theres always going to be a reason not to do something. But Gana/Onana together would be smart business.
T

Apparently only €10m up front and instalments on rest. Presumably we will offer a 5 or 6 year deal to spread amortisation. If we can get this done it makes the IGG move make more sense as you have the future learning from the past/present. Onana is still raw and inexperienced so if he does come expect him to be eased in. Really changes MF if it happens, just leaving the black hole up front!

Wrighty said:
I get your point, but we also now have a CF in DLC that is made of glass it seems and Richi has gone. we could do with both but we got no £££
Click to expand...

We will get a striker In. We have no money yet we signed mcneill and maybe this lad and gana
Maybe we have more money then people think they know?

I see small things. Only bigger.

Toffe3m4n said:
Reports this morning from a number of reputed journos are saying that we've matched their bid and the kid would prefer coming here.
Click to expand... 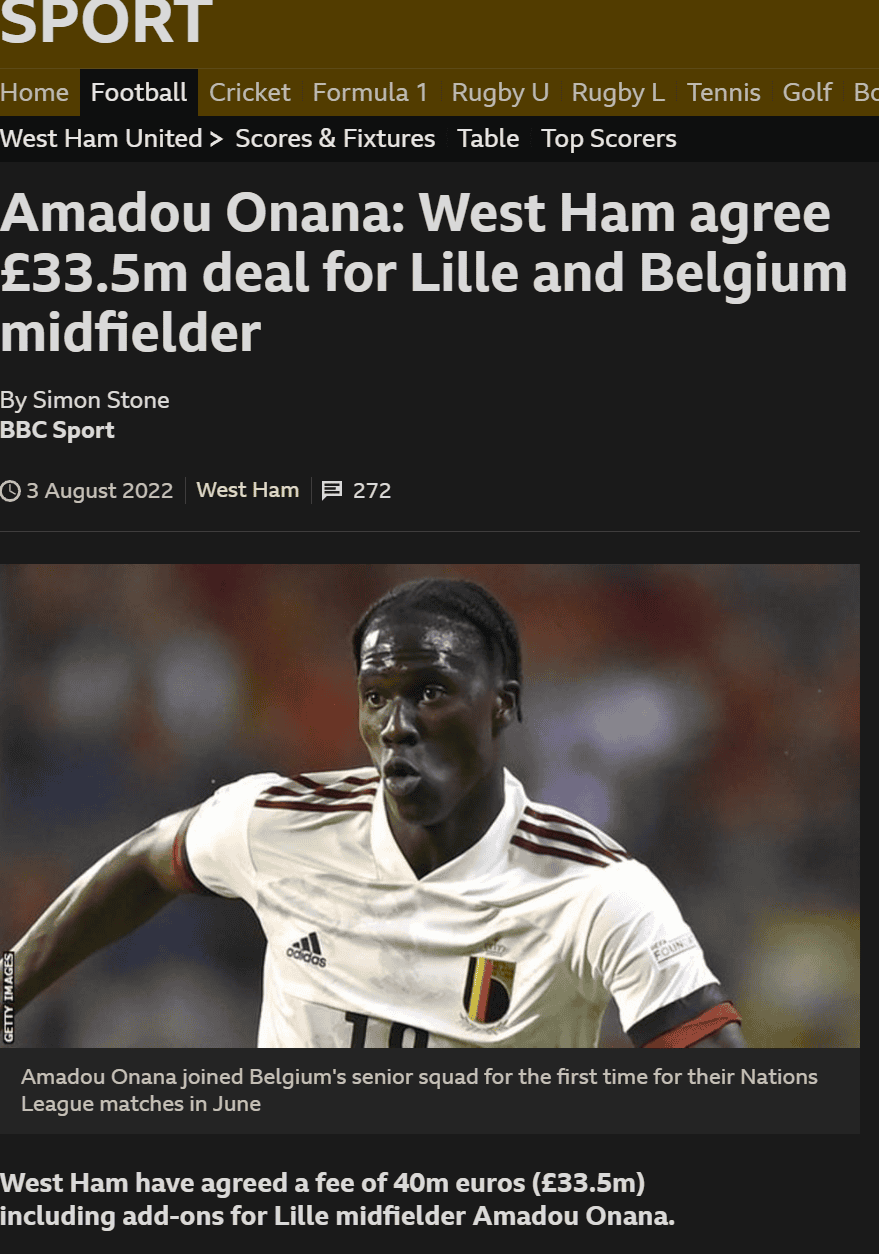 Mikey_Fitzgerald said:
I would think we'd have to have some kind of regular contact with them mate, even if it isn't being done on a signing by signing basis
Click to expand...

Either that mate or we literally agreed to get the wages down to a certain reduction over prior levels and that we wouldn't exceed a certain transfer spend over income via transfers on the P&S this season.

TyphooToffee said:
I was thinking the same. There are still opportunities from corners and free kicks. Having an extra 6'5" presence would certainly help
Click to expand...

Stressful like, but if it gets us safe by April then I think we'll all be content

Paul Rideout said:
If we don’t concede we don’t lose.

We had a very successful strategy of a not great quality striker up front with Marcus Bent once upon a time… we just need someone up top Who can run all day (and hopefully has a better skill set than Marcus did)
Click to expand...

most posters on GOT haven`t quite grasped that concept, they thought if you concede 3 goals then that new striker we bought with all the money we haven`t got, would score 4

ForeverBlue92 said:
We aint challenging for europe this season so I'm not fussed if we dont get all that we need until 31st August tbh.

This season is all about pushing top half - Chelsea and Villa away our first 2 games will both be back to the walls defending and hoping to nick a scruffy goal anyway.

Signing a CF wont make much difference to the game plan of those 2 games realistically providing Dele can step up and hold the ball as a target man type forward.
Click to expand...

Maybe but six games this month we will need someone Alli in an unfamiliar position backed up by Rondon is not a good strike force. We need another. I suspect we are holding out for Broja maybe he comes after we have played them.
M

billyblue80 said:
Maybe but six games this month we will need someone Alli in an unfamiliar position backed up by Rondon is not a good strike force. We need another. I suspect we are holding out for Broja maybe he comes after we have played them.
Click to expand...

Last minute deadline deal no doubt. He wouldn't be able to play against us in any case.

Against them I mean.

Mikey_Fitzgerald said:
A season of scraping 1-0 wins at a raucous Goodison doesn't sound too bad to be honest

I can see that sort of season happening

Oddball said:
most posters on GOT haven`t quite grasped that concept, they thought if you concede 3 goals then that new striker we bought with all the money we haven`t got, would score 4
Click to expand...