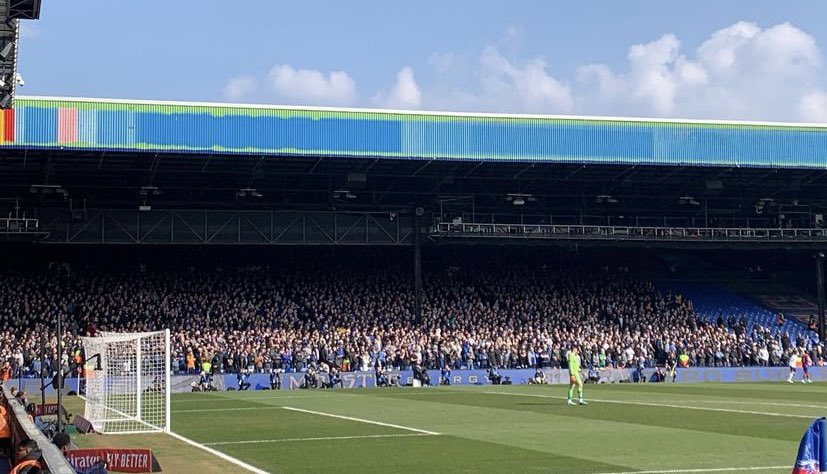 ‘We’ve got to stay positive; we know these are s**t but we have to pull them through at Goodison’

A lone voice could be heard with a rally cry to fellow supporters as thousands of Evertonians headed for the exit at Selhurst Park, at this point Crystal Palace had only just scored their third. We all knew things were bad but when Will Hughes is scoring then you know things are unfathomable.

Almost 4,000 fans had made the long journey – with the vast majority setting off in the small hours to make the lunchtime kick off – it was a typical Everton away performance, starting fairly well without troubling Jack Butland but once Palace scored their first it was game over. No response. Fans could’ve started to make their way out of the ground at that point and all they’d have missed is another embarrassing drubbing. The abject performance even more bizarre given the euphoria of the last-minute win at home to Newcastle just days earlier. Goodison was rocking at the final whistle – 14 minutes of injury time, a cable tied protester and Alex Iwobi the match winning hero – if you hadn’t witnessed it with your own eyes, you wouldn’t have believed it was possible.

Fast forward two weeks – via another international break – and Alex Iwobi goes from hero to almost zero, let’s have it right, Iwobi was far from the sole reason Everton left the Olympic Stadium with no points – arguably the most effective forward in an Everton shirt – but that mistake proved to be hugely costly; yet you have to ask other questions like how did Michail Antonio find himself one on one after a mis control 60 yards from goal? Why is nobody following Jarrod Bowen’s run to stop him getting the tap in after Pickford’s save?

You’ll often find that players are vilified for a defensive mistake that will ultimately lead to a goal, yet mistakes and misses at the other end of the pitch are just as costly – as was proven against West Ham. Richarlison and Calvert-Lewin both extremely wasteful in front of goal, with the former failing to trouble Lukasz Fabianski from excellent positions in the first half, yet all the post-game attention has been focussed on the mistakes in defensive positions. Given that the stats tell us Everton currently have the 16th worst defensive record in the Premier League but sit 20th and bottom in the attacking column, proving the vast majority of Everton’s struggles are further up the pitch but collectively it all falls drastically short.

The inquest into the management of the club will go on long after this season whether Everton are playing Premier League football or not but the one constant in the Moshiri era has been money – lot’s and lots of wasted money; the decision to hire Rafael Benitez to replace Carlo Ancelotti; the idea that investing January’s valuable transfer kitty into two new full backs – presumably of Benitez’s choosing – then to sack him a week later; signing Anwar El Ghazi on loan from Aston Villa because his agent is Moshiri’s mate just after selling them a left back that fell out with Benitez who – as a reminder – was sacked shortly after. These costly decisions have been happening ever since Moshiri decided to invest in Everton Football Club, it has become his plaything that he seemingly thought he could find success by simply throwing money around but when that failed, he just threw more money onto the table which has now seen Everton regress and could ultimately see this club relegated from the Premier League.

The situation Everton currently finds itself in can’t be solely attributed to last summer or just this season but on years of inexplicable decisions from the top; how do you spend £500m plus and end up in the most precarious position since the mid 90’s? – even more mind boggling when you consider it was only December 2019 when Carlo Ancelotti was hired to succeed Marco Silva and the following summer James Rodriguez followed through the doors at Finch Farm. Evertonians had the audacity to believe the club was finally heading in the right direction, yet a mere 18 months’ later and reality bit and it bit hard; not only did Carlo hot foot it back to Spain to answer Real Madrid’s call but Moshiri believed – as previously discussed – the answer was Benitez.

All this leaves us heading now into a must win – or at the very least must not lose – trip to Burnley on Wednesday. This is arguably Everton’s biggest game in years, possible since the 1998 survival game against Coventry City. It really is that big and more besides. The fate of Everton Football club rests at the hands of Frank Lampard and a group of players who seem to crumble when the pressure is on; this is now the time to stand up and be counted. This is the time to fight to keep Everton in the Premier League. The fans must also play their part and as that sole voice amongst the despondent supporters said, ‘we must drag these through at Goodison.’

This team must fight, they must stand up and be counted and Everton Football Club must survive because the alternative cannot be contemplated.