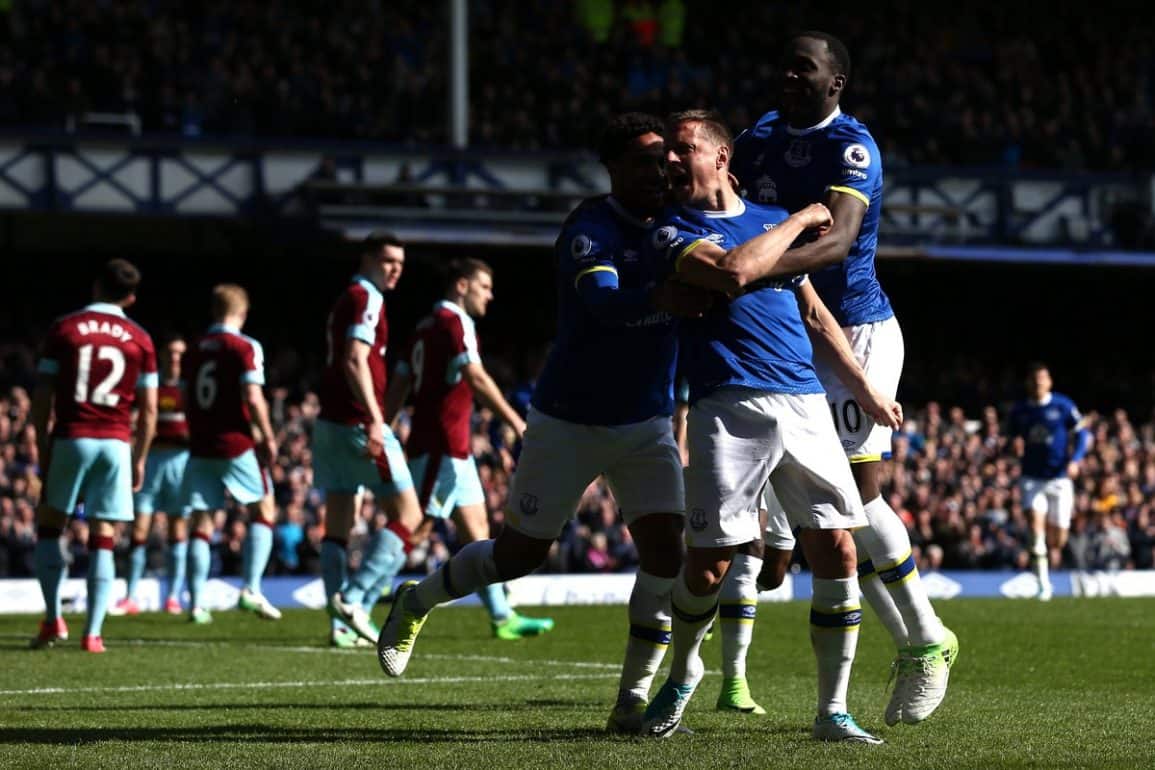 Brief summary… A superb second half turnaround by Everton with a man of the match performance from Ross Barkley saw Everton past a determined and hard-working Burnley.

After a week of disappointing headlines, particularly for Ross Barkley, it was nice to get back to concentrating on the game itself with a stiff challenge and potential banana skin in the shape of as yet, winless on the road, Burnley.

Wearing an Arabian suntan and in charge of proceedings was the ever popular Mark Clattenburg.

With Goodison again bathed in glorious spring sunshine and a lot still to play for, Everton set about reversing the October loss at Turf Moor, and putting pressure on the teams above, especially Arsenal.

Sadly, the first half failed to live up to the expectations of the home fans as Everton stuttered while Burnley were not overawed and set about stifling the midfield and pressing very effectively.

A fine tackle by Williams on Barnes in midfield set up some Everton pressure, but the visitors soaked it up with the only notable effort being a Gueye shot comfortably saved by Heaton.

Brady hit a 30-yard free kick that was deflected for a corner from which Ross Barkley made a crucial goal line clearance to deny a back post header from Keane.

Robles spilled a high looping cross from Ward and a follow-up cross from Lowton fizzed across the face of the Everton six-yard box, much to the consternation of the home crowd.

Gana Gueye was booked on 28 minutes ahead of Vokes latching onto a long ball. Jags got back to force him wide, but Robles needed to stand tall and beat away the shot.

A shocking back pass by Jagielka then presented Vokes with a glorious opportunity that thankfully, he made a complete mess of.

Everton needed to get into the game properly and they responded with some possession and pressure that led to a snapshot from Holgate being turned away by Heaton at full stretch.

A long ball from Jags was nicely laid off by Lukaku for Mirallas to shoot but again, the visitors got a telling deflection to send the ball over the bar.

The last meaningful attempt of a disappointing first session saw Gana Gueye mistimed a shot after Baines and Barkley had worked the opening.

Ener Valencia came on for Gana Gueye for the second half and his introduction saw a much brighter start by the Blues.

Williams saw a header from a Baines free kick turned away for a corner, and the next Blues attack saw a super interchange between Lukaku and Valencia with the on-loan West Ham forward blasting in a searing shot that Heaton was glad to punch away.

Everton took the lead in the 48th minute when skipper Phil Jagielka notched his third in three games, forcing home from a corner in a goalmouth scramble.

The lead however was short lived, as Joel Robles inexplicably chased after Vokes and brought the Burnley man down for a penalty that he duly despatched on 51 minutes.

Burnley were boosted and Barton fired over from long range as Everton tried to recover some composure.

A nice move involving Lukaku finding Barkley to send in Mirallas came to nothing on a time shot, before a better move started by Davies setting up Baines for the cross ended with Mirallas beating Heaton, but hitting the post with his shot.

Schneiderlin reacted to a challenge from Barton and received a lecture from the referee before the Blues regained the lead.

Lukaku found Mirallas in the left wing corner and when he found Ross Barkley, his shot took a selection before nestling into the Gwladys Street goal.

Understandably, Ross was euphoric and excited at scoring after the week he has endured, but referee Clattenburg annoyed the crowd for booking the Wavertree-born player for his celebration, almost going into the crowd.

Burnley sent Gray on for Vokes, but Goodison erupted moments later as Romelu Lukaku superbly span away from Keane before unleashing a blistering left foot shot that Heaton had no chance with at his near post.

Both sides made more substitutions but the day belonged to Barkley as he completed another goal line clearing header before coming off for a well-deserved standing ovation and replaced by Lookman for the final few minutes.

This was very much a game of two halves with Everton somewhat out of sorts in the first half against a hard-fighting and well organised Burnley. The second half though was immeasurably better and capped by the goal for Barkley and the blast from Lukaku.

Everton were sloppy in the first half, looking out of sorts in all areas of the pitch, but whatever Ronald Koeman said at half time coupled with the injection of pace from Valencia helped steady the ship and set the team on the road to victory.

For Ross Barkley, this performance was just what he needed. He was at the centre of practically everything good for Everton today and he rose above the nonsense and controversy that has surrounded him since last Sunday evening.

He is a diamond, a diamond that still needs some polishing, and where better for him to be polished than in a royal blue jersey.

Speaking after the game Ronald Koeman enthused, “Ross concentrated on his game all week, it was never in my mind not to play him. Ross will learn from things like this week. I did stupid things as a young man and like me, he will learn.”

Burnley were the better side first half, but we worked hard and showed our quality.”

“I made my mind up to change things after 30 minutes, as they were better than us to that point.”

“Tom Davies played well second half, but not so good first half. I decided to change one midfield player and with .gana getting booked, it had to be him to come off at half time.”