Warning: This is slightly dweeby analysis of EvertonÂ´s transfer spending that attempts to explain why the figures quoted by EFC Chief Executive Robert Elstone and published in the club accounts do tie in with reality.

Hopefully it casts some light on the complex cash flows involved in many transfers, but it may be a bit dull!

After Everton announced the purchase of Darron Gibson last week I tweeted:

“Little known fact. Everton have been net spenders on transfers every year since Rooney left (cash figs from accounts).”

Along with this graph: 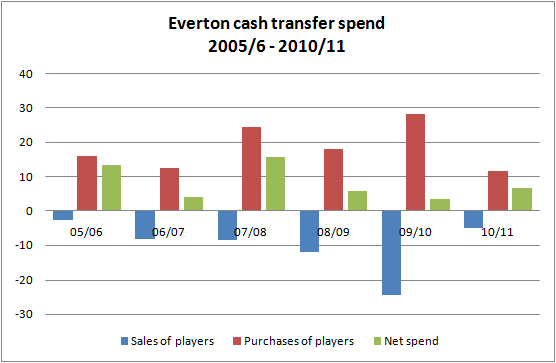 This was met by some understandable scepticism from Evertonians pointing out that in 2010/11 “we didnÂ´t sign anyone”. Then by happy coincidence, Everton Chief Executive Robert Elstone published an extraordinary blog on the clubÂ´s official website entitled “Where The Money Goes”, which said exactly the same thing I had said.

The dichotomy between the honest opinion of Everton fans that the club has been more about selling than buying and the numbers in the clubÂ´s cash flow statements in the accounts showing net spend over each of the last six years needs explaining.

The problem arises with the phasing of payments for players and receipts from their sale and from the fact that the only information we have are headline figures for deals, what you might call “the Sky Sports News number”, and two numbers in a clubÂ´s cash flow statement, one for purchases and one for sales.

The details Elstone gave on transfers
This is what Robert Elstone has to say about EvertonÂ´s transfer activity since 2006/07 (emphasis as in original):
“[2006/07] We spent £4m net on new players (money we paid out on signing including Kroldrup, Davies, Johnson and Lescott less money banked on the likes of Rooney, Bent, Kilbane and Davies).

[2007/08] A net spend of £15m (further money we paid out for Kroldrup, Johnson and Lescott and new spending on the likes of Howard, Jagielka, Yakubu, Baines and Pienaar, less the money banked for Davies, Kroldrup, Beattie, McFadden and Naysmith).

[2008/09] We spent £6m net on players(payments for Yakubu, Baines, Howard, Kroldrup, Lescott and Fellaini, less monies in for McFadden, Kroldrup, Beattie and Johnson).

[2009/10] We spent £3m net on players (payments out on Yakubu, Fellaini, Bilyaletdinov, Distin and Heitinga, less monies in for Johnson, Rooney and Lescott).

[2010/11] We spent a further £7m net on players (money spent on Fellaini, Heitinga and Gueye, less cash in for Lescott and Pienaar).”

Modelling EvertonÂ´s cash transfer spend
We can look at ElstoneÂ´s long list of purchases and sales in more detail in the table below, along with the actual cash flows from the Everton report and accounts. 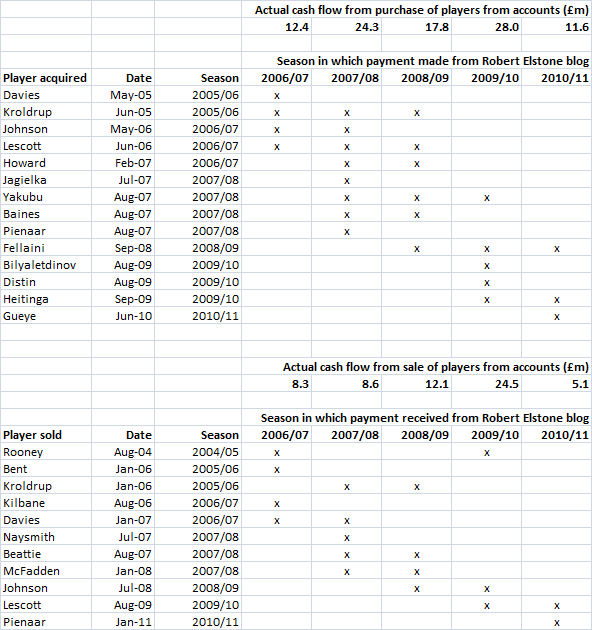 We can then apply some estimates of transfer prices, I have used figures from transfermarkt.co.uk except for Tim Howard for whom no figure was available on the site and I have estimated £3m, the sale of Simon Davies (est £2m) and for Rooney where the relevant stage payments for 2007 and 2010 are estimated from note 11 of MUFCÂ´s 2005 accounts.

Except in the case of the Rooney stage payments and the payments for Lescott, I have assumed that where cash is received or paid over multiple seasons all payments are equal (a modelling simplification I concede), so we can get to an estimated payment/receipt per season: 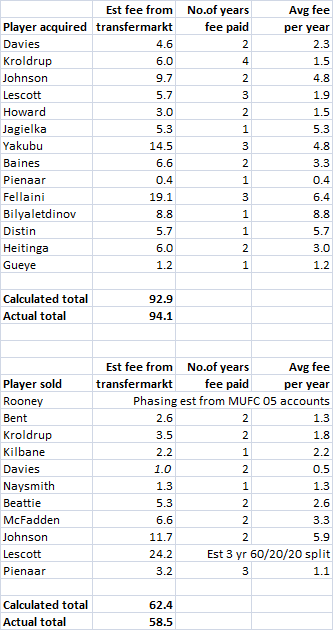 We can then apply the payment/receipt per annum estimated to the sequence of payments given by Elstone and compare the calculated figures to the actual cash flows in the report and accounts: 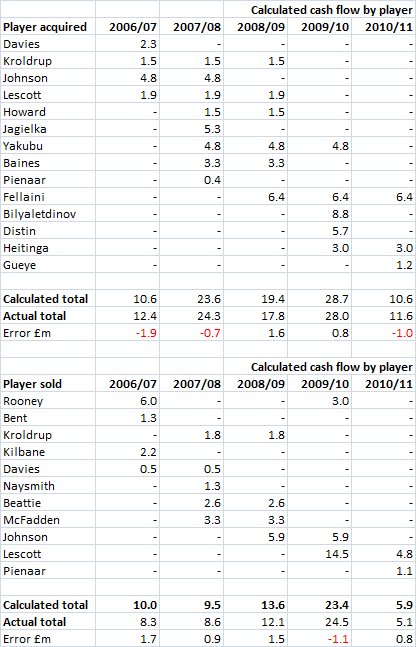 As can be seen from the table above, this model matches the actual numbers from the accounts pretty well, with an error of only £1-2m per annum.

Conclusion
I am not claiming the above model is perfect, but hopefully it shows why EvertonÂ´s published numbers are correct. The issue of phased payments creates significant confusion when people examine football club accounts, something we will no doubt see with Chelsea and LiverpoolÂ´s next few results in which the £50m paid for Torres will be spread over 5 years….

ItÂ´s worth noting that for two years in 2003/4 and 2004/5, Manchester United, under pressure from the clubÂ´s major Irish shareholders Magnier and McManus published detailed player by player analysis of all transfers. The example below from 2004/05 (apologies for the low quality) shows the complexity of the cash flows and conditional payments: 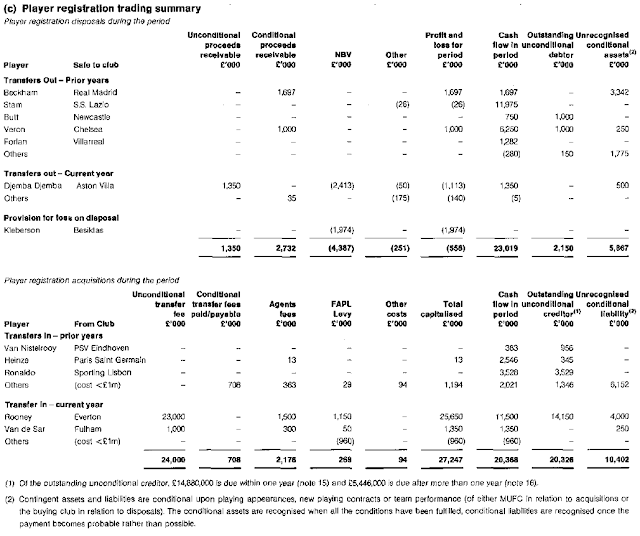 Only £1.4m of the £23m cash United received that year was from player sales in that season and only 58% of cash spent related to deals signed in that year.

I can see no logical reason why UEFA, FIFA or national associations shouldnÂ´t insist on this level of disclosure, prices paid are hardly commercially confidential, and then everyone could see how much their club does or does not spend and on whom.