Who's next after Benitez - Poll reset 25th Jan

Shame Cahill didn’t follow Arteta’s route into management. He’d have his foot on the throat of this squad.

Youngish manager, has an actual style of play that’s good to watch, doing well at Brighton who have basically no net spend the last 2 years, not a recycled has been. Of the options on the table, he’s as good as we could hope for. Sadly, sounds like he’s already taken himself out of the running

Forum Supporter
This bobble live lounge feed: it's just lads with posh accents talking tripe as far as I can make out.

argietoffee said:
If Martinez gets this job, its sayonara from me.

If you came up with a detailed, long term strategy to be disastrously run, you would have to take your hat off to this board for exceeding all expectations.

This is football´s version of Brewsters Millions.

Bobby is a lovely guy but a disastrous defensive coach and we are exactly in the position where we were when we rightly sacked him many moons ago.

Nothing he has done since remotely convinces me he has learned one jot in the meantime.

Idk, always took Bobby as more ignorant than arrogant. Just idealistic with how he wanted things to be played. I’d rather have him back than someone like Mourinho, but really he shouldn’t even be on the list.
M

Shows everything about the club when kenwright still has a say is what is wrong with the club. Martinez just wtf is that wont solve any problems we have. Need a whole reworknat the club with a system in place.

carolinablue232 said:
Idk, always took Bobby as more ignorant than arrogant. Just idealistic with how he wanted things to be played. I’d rather have him back than someone like Mourinho, but really he shouldn’t even be on the list.
Click to expand...

Because I like him, I will stick to arrogant.

If it is ignorant, he is a con artist and I dont think he is.

Wasn’t that long ago this guy was being mentioned as Benitez’s successor. 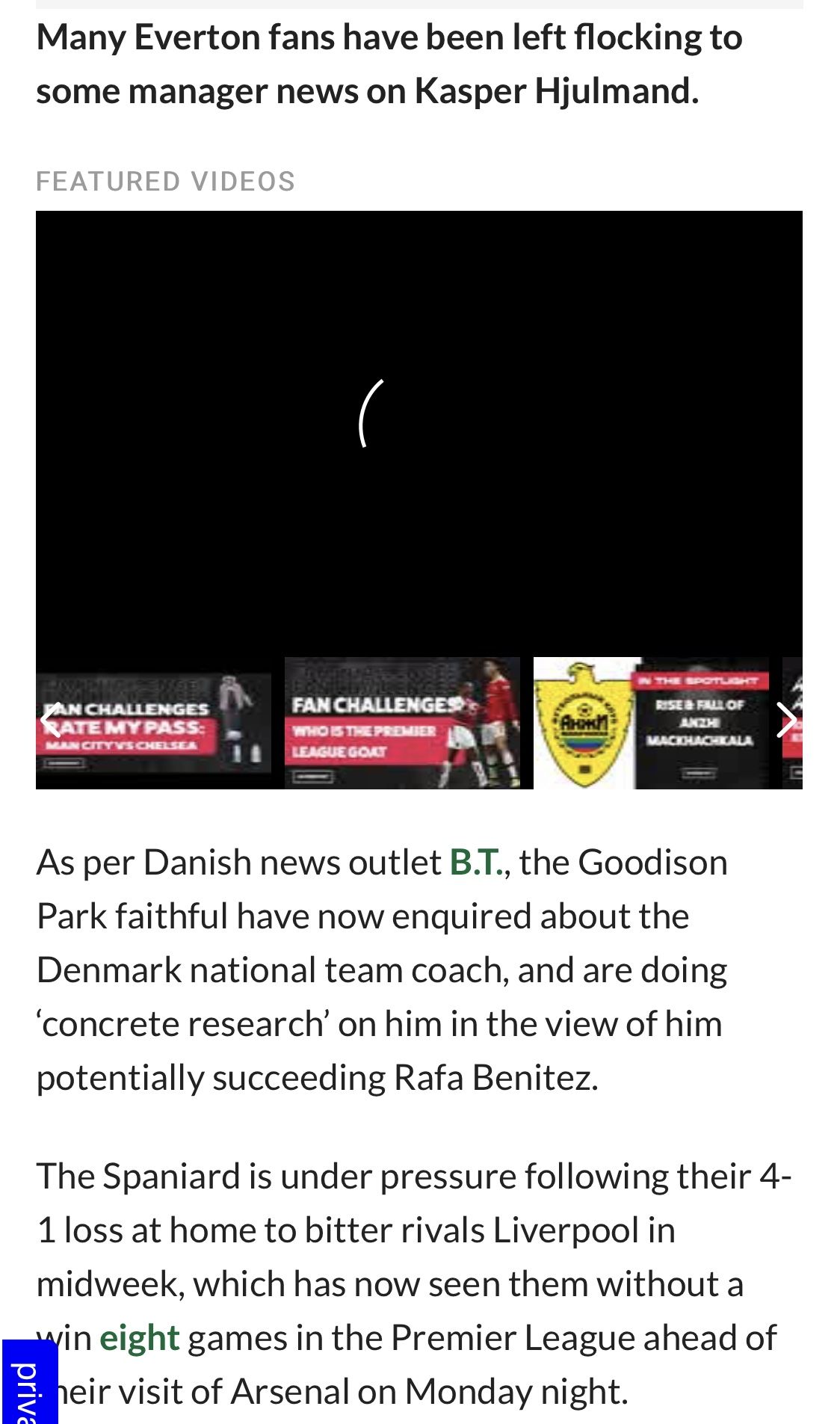 Forum Supporter
We need somebody who knows the club.

No accident this club only wins things when we have a former player as manager.

We need someone who has played at the highest level and can unite the fans.

Someone who will cost next to nothing, or even better nothing.

Ladies and Gents, our interim manager should be Mr. Gylfi.

I’m not bothered who‘s appointed really, and whoever it is will need balls of steel to sort this mess out, but I don’t think it’s correct to say Rooney isn’t experienced enough, he’s been managing the basket case that is Derby just one division below us.

Thomasc said:
Wasn’t that long ago this guy was being mentioned as Benitez’s successor.
View attachment 152213
Click to expand...

I'd suspect he's in the running if we've genuinely enquired.
A

Firstly, he plays a progressive style. We are desperate for some attacking football after Benetiz and Carlo's 'defensive' pragmatism made us one of the most boring to watch teams in the league.

Secondly, he has a massive point to prove. The next job he takes has to be a success, otherwise his reputation is in the toilet. At Chelsea he blooded young players, he navigated a transfer embargo and was clearly well liked by the players.

On the players, we clearly have a squad of mentally weak individuals. The hardcore Rafael style clearly didn't resonate and just further sapped their confidence, whereas Carlo was probably too light of hand. In that sense, I think a younger 'players' manager, that has the capacity to put an arm around, but at the same time be strong where need be (see Jurgen), is what we need. I think Lampard could be that.

Anyway, I understand that he won't be everyone's cup of tea, but this next managerial appointment is clearly going to be a punt and I like the idea of punting on someone with a point to prove, that is familiar with the pressures of the premier league and has the name gravitas to attract players.

Runub said:
Mourinho would not come here. He doesn’t do difficult jobs
Click to expand...

He would for the inevitable massive, and I mean massive, payoff. His compensation when he left Spurs was like £25m or along those lines. And he wouldnt last anywhere near that with us.

Cool_Blue said:
I’m not bothered who‘s appointed really, and whoever it is will need balls of steel to sort this mess out, but I don’t think it’s correct to say Rooney isn’t experienced enough, he’s been managing the basket case that is Derby just one division below us.
Click to expand...

My opinion is that because it is a basket case that is helping him. Has a group of players literally fighting for the survival of the club and their livelihood. Not sure the same can be said about a good proportion of the Everton squad

I wanted Potter in the summer. Nothings changed my mind.

It looks like you're using ad blocker. We get it, but (1) Grand Old Team can't live without ads, we ensure they're not intrusive and (2) ad blocks can cause issues with site performance. If you'd like to support the site, and help ensure we can stay online, please do whitelist us. If you can't or don't wish to disable your Ad-block, please consider upgrading your account for the cost of a pint a month here. Thank You.