still 2-2 after 63mins,this 2nd half feels like its going on forever to me

EVERTON 3-2 ON 81 MINS - Otasowie OG -Great play by John down the right and wolves defender mis hits it and goes in,Curse of the com as he was saying he wouldnt be surprised if another goal the last 10mins from a mistake etc

Everton u23s beat Wolves u23s 3-2 for there 1st league win since sep stoping a run of 4 consecutive league defeats Simms with 2 and an OG win it,a game full of mistakes really, Everton moved back up to 8th after they went down a place to 9th yesterday due to Man city winning,Next league game is away to southampton early Jan 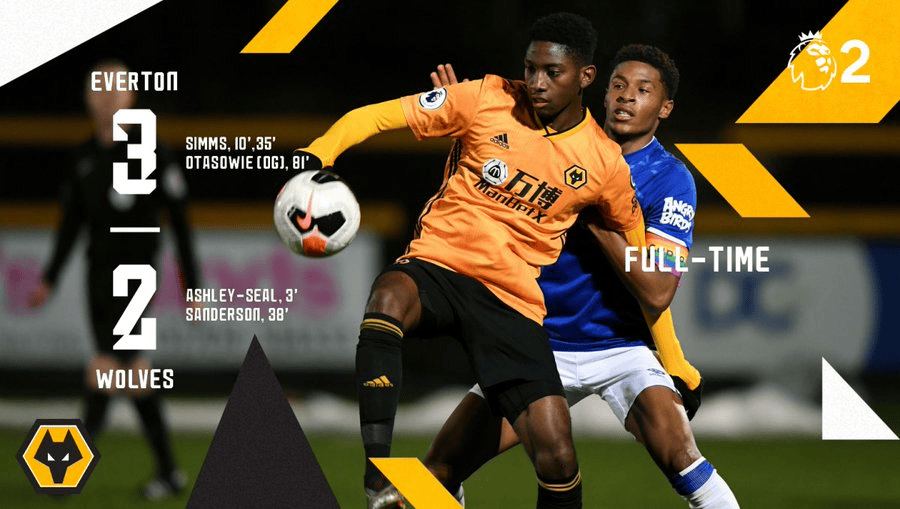 Player Thread Sponsor
I’m putting this win down to Big Dunc who was watching , the whole club have started winning again since he took temporary charge. Hopefully he will do some more work withEllis Simms, he’s starting to put it about a bit now and 2 goals tonight was a good reward.
PS . Shocking that clubs like Wolves, Leicester , Derby etc show us up with their coverage of OUR games when we can’t be bothered.

we need to give our youth a chance

David Unsworth said Everton Under-23s’ impressive 3-2 victory over Wolverhampton Wanderers on Monday night will provide an important injection of confidence for his young side.

Ellis Simms struck twice in an absorbing contest at Southport FC’s Pure Stadium, with the game settled by a late own goal from Wolves midfielder Owen Otasowie.

The Midlands side hit the front early on through Benny Ashley-Seal, before two typically predatory Simms strikes turned the game on its head.

Dion Sanderson levelled for the visitors before half-time but Otasowie’s own goal nine minutes from time ensured maximum points for Everton, who move up to eighth in the Premier League 2 table.

With the likes of Morgan Feeney, Lewis Gibson, Antony Evans, Dennis Adeniran and Anthony Gordon unavailable for Everton, manager Unsworth named an inexperienced side for the game.

He was impressed by how they stood up to the challenge against a strong Wolves outfit.

“It was a great performance from a young team,” Unsworth told evertonfc.com.

“It was big team performance and there were some great individual performances throughout that – Nathan Markelo was terrific, Ellis got his goals, the back five were good and big Con [Ouzounidis] - he is doing so well after his injury.

“We had a lot of players playing together for the first time. It feels like a new group.

“We set up in a way which we felt would help them. We played some great stuff, particularly in the first half, and then we changed our shape to dig in. We did a lot of work in training and the players showed they were listening and that they could apply that in a game situation. That’s always pleasing for a coach.

“It’s a much-needed win and I’m sure it will bring a lot of confidence to this young group.”

After Wolves got off to a dream start when Ashley-Seal prodded home from close range after just two minutes, Simms showcased his ruthlessness in front of goal to turn the game on its head.

On 10 minutes, the 18-year-old frontman intercepted a loose ball before homing on goal. The powerful striker then steadied himself before calmly slotting past Wolves keeper Harry Burgoyne.

His next strike owed much to defensive duo Matty Foulds and Joe Anderson.

Foulds sent in an excellent dipping corner delivery, which was met by Anderson at the back post. Anderson played a first-time volleyed pass across goal, where Simms was alive to hammer an effort into the roof of the net.

“Ellis’s game is improving all the time,” Unsworth said. “He is still a big work in progress and has a long way to go but he is on an upward curve and he did great.

“We know he’s got that finishing ability – that’s a given for us. It’s the other bits about being an all-round centre-forward that we want.

“Being able to hold the ball up and run the channels, play one and two-touch, and be strong in the air as well. The kid is hungry for goals and he is doing all right.”

Wolves’ response was instantaneous after Simms’ second, however, as Sanderson’s powerful shot from 25 yards found the bottom corner.

Both sides had chances in the second half, with Einar Iversen seeing a shot deflected inches wide and Wolves forward Elliot Watt forcing a fine save from Nico Hansen.

The winner came deep into the second half when wing-back Kyle John – excellent throughout – made a trademark lung-busting surge down the right before fizzing in a low cross aimed at Simms. Wolves midfielder Otasowie attempted to intercept but only succeeded in turning the ball into his own goal.

“Kyle was a bundle of energy up and down the right, playing in a system that really suits him as a wing-back,” Unsworth added.

“He’s got terrific pace, which is fantastic for any young player to have.

“He’s a great lad, he’s honest and we expect a lot from him, especially when he performs like he did against Wolves.

“He probably set a new bar. He has got to aspire to reach that level every game and go above it if he wants to kick on and be a top player, which potentially he could be."
P

I was impressed the most by John today. I saw a game from Hector Bellerin a year or so before he broke into Arsenal and got similar vibes from him today. Full of Energy and very skilled on the ball. Defensively, it wasn't an easy game what with playing against that bald guy who looked about 30, but he settled nicely after a bit of time. If he can keep this level up (and that's obviously not a given, I think last week was a particularly difficult game for him if I remember right), the club should look for a loan opportunity for him at League 1 or preferably Championship level for him.

Simms looked really good in the first half and showed his strikers' instincts. He looked more like a target man who can maybe connect play up top though and not one for a counter attacking style. He faded a bit in the second half I thought.

Kudos to the team. The first half was a bit mental, but the Everton lads dug in and managed to cut out the worst mistakes after the break.

we need to give our youth a chance
Click to expand...

How many pints you have last night?
B

we need to give our youth a chance
Click to expand...

Greenwood is a playing year younger than Simms, was making his mark as a Schoolboy at u18 when Simms was struggling to make our u18 and scores goals at PL. level , enough said. I thought Simms was very good last night , is back to using his pace and strength to hold off defenders and is scoring goals . He’s currently way better than any other U23s striker and should be with Gordon training with the first team as he’d learn so much, but he wouldn’t get into our squad .

Does anyone remember the Dutch kid we had on trial...meant to be a future star ZIRKZEE ?

Scored on his debut for Bayern

Zatara said:
Does anyone remember the Dutch kid we had on trial...meant to be a future star ZIRKZEE ?

Scored on his debut for Bayern
Click to expand...

From memory although rumoured he never actually played in our youth teams. We along with a number of others were apparently interested him as his agent was touting him about. I think in one team photo one of the coaches was mistaken for him

Zatara said:
Does anyone remember the Dutch kid we had on trial...meant to be a future star ZIRKZEE ?

Scored on his debut for Bayern
Click to expand...

@Zatara , sorry I got this wrong . You're right he did play a game or two in the CEE cup July 2017, while sorting out a clutter of old papers I found the team sheet! Con Ouzounidis and Gordon where in the staring line up, with Joe Anderson and Ellis Simms on the bench, all the rest are now gone. I think he’d just left Feyenoord and was being hoiked around Europe by his agent, went to Bayern just weeks later.
That tournament had streamed games, it was the first chance to see Simms, Gordon had played u18 s earlier.

blueloon said:
@Zatara , sorry I got this wrong . You're right he did play a game or two in the CEE cup July 2017, while sorting out a clutter of old papers I found the team sheet! Con Ouzounidis and Gordon where in the staring line up, with Joe Anderson and Ellis Simms on the bench, all the rest are now gone. I think he’d just left Feyenoord and was being hoiked around Europe by his agent, went to Bayern just weeks later.
That tournament had streamed games, it was the first chance to see Simms, Gordon had played u18 s earlier.
Click to expand...