BrendanGOT said:
We're crap but theres about 8 to 10 teams worse than us every season. We have been worse in the past and not got relegated yet every season since Koemans last a relegation thread pops up in here when we have a bad run. Would swear some of our fans are wishing and willing it.
Click to expand...

blulouie said:
There's one in particular thinks its a good idea to get relegated just to get a day out at Wembley in the play offs

Getting relegated could be the big reset we need! Genuinelly

Rooney_Tunes said:
Name five and I will give you a reason as to why they are not worse than us.
Click to expand...

There are currently 9 teams below us in the table.
Not a chance we are ever getting relegated.....EVER

There is also never a chance in us ever winning anything again or probably even playing in europe!!

Going Through The Motions FC

Forget the drama queens we are too good to go down and are in no trouble currently regardless of our poor form/points tally likewise we are too poor to get to Wembley in a boss cup run, to a latter stage in Europe or fight for the top 4 spots.

And thats not just solely on the board/manager/players - UEFA/PL only care for the ESL clubs and rules such as FFP are designed to keep clubs like us in our box and 99% of the time it works as only Leicester have achieved anything outside that cabal and they haven't been able to increase their revenues in that time meaning at some stage they'll fall back into the midtable pack.

For a club of any league - being a midtable non entity is a nightmare.

You either want to have the highs of success or the adrenline rush of a 6 pointer encounter or great escape which is what football is all about - the all or nothing feeling that can't be beaten.

We have nothing and thats not going to change unfortunately so my advice to fellow Blues is dont let it get you down as I certainly have little interest in spending my time fuming at the club when come GW 38 we'll be where we always are.
Click to expand...

I'm in exactly the same boat as you mate!

WE are the most pointless club in the country!

There's not even an exciting build of a team like we had in the Cahill, Jagielka erc

Just a bunch of fella's not good enough for the elite and just going through the motions, thinking 'is this my career'?
E

The new ground would be put on hold subject to agreement at a high level meeting. We cannot move if we are in the Championship and little prospect of returning soon. Tatty old Goodison may have a new lease of life. That is of course if you agree with the predictions of our few now exposed relegation enthusiasts. I am sure the majority regard them as unhinged nutters?

Raino85 said:
I'm in exactly the same boat as you mate!

WE are the most pointless club in the country!

There's not even an exciting build of a team like we had in the Cahill, Jagielka erc

Just a bunch of fella's not good enough for the elite and just going through the motions, thinking 'is this my career'?
Click to expand...

Football is meant to be an escape from the daily routine of life but sadly the PL has made it where simply surviving in midtable mediocrity collecting the TV money is seen as some sort of success so long as you get to watch some over rated over paid wasters turn up occasionally and beat a top 6 glamour side that hoover up the trophies aided by FFP, VAR etc.

Going to the match is just a routine for me now - I have no excitement, no anticipation, no butterfly's or dread - it's as routine as taking the lad to school or going to work and thats the sad thing.

I want success above anything else but if the choice is ever this 8th-14th existence forever or actual 6 pointer matches, last day great escapes etc. Then give me the latter anyday of the week as at least it gives us some sort of emotion/excitement/dread/nerves everything football should be but has been completely ruined by the money in the top flight.

The 90's were a dark period but christ an FA cup final win, last day great escapes, dogs of war - give me that emotion and rollarcoaster ride over these last 5-6 years any day of the week.

Some on here dismissing relegation, how can you be so sure.

Too big to go down? Too good to go down? Alot have teams have said that in the past including a Rafael Benitez Newcastle side!!!!!

How long before we are involved with form like this, see table below.......

Of those 9 clubs below us all are in better form AND look at our run of fixtures, if we go down we will be another Leeds and spend decades coming back. 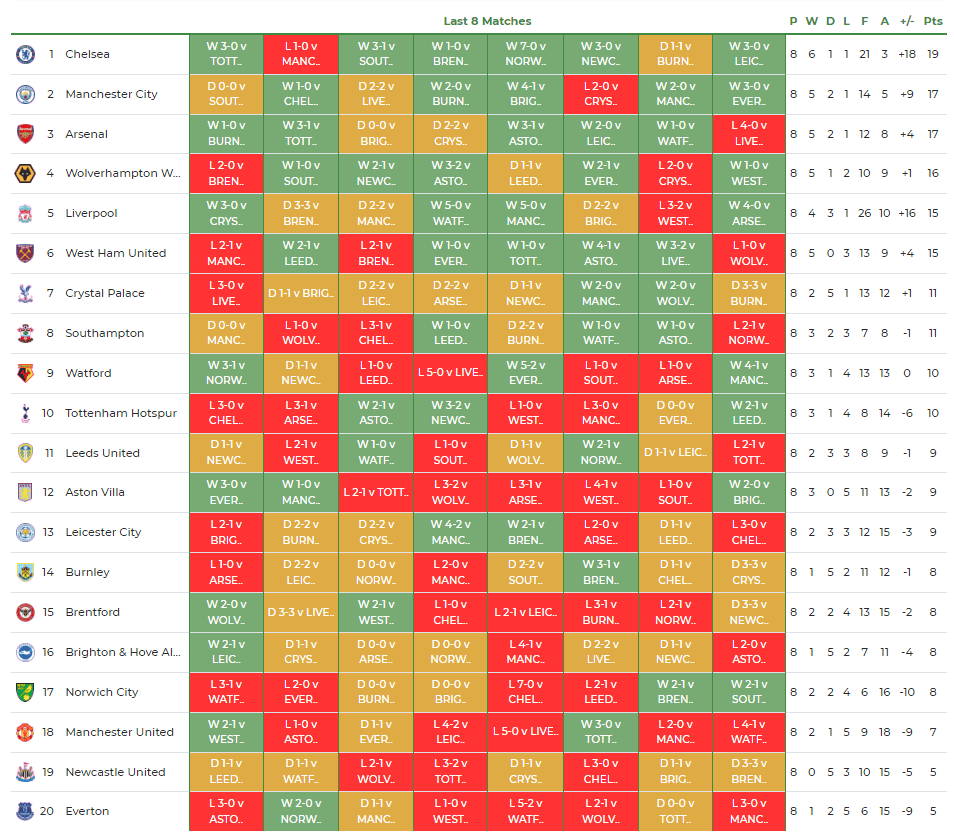 BrendanGOT said:
We're crap but theres about 8 to 10 teams worse than us every season. We have been worse in the past and not got relegated yet every season since Koemans last a relegation thread pops up in here when we have a bad run. Would swear some of our fans are wishing and willing it.
Click to expand...

Whenever relegation has become a possibility in recent times, the manager has been sacked, we quickly win a few and panic over (Koeman/Silva).

There might be a slight worry if this was our best team but the spine of it aren't available.

The return of injured players will see an upturn and we've got the trump card of the January window and a change of manager if really necessary.

For Everton to get relegated things would have to go catastrophically wrong because the bar is so low. Similar to Liverpool or United finishing in the bottom half for example. They can be wretched all season and still finish 6th.

Relegate us football gods it’s our only hope
F

Need to get Mina, Duke and DCL back asap (in that order, but preferably all at the same time)

and we need to keep at least 2 of them on the field, and in good form, for all of the rest of the season otherwise it will be squeaky bum time last few games.

paultheblue said:
The idea that relegation would be good for us is idiotic.Anybody who attended the Wimbledon game 94 and Coventry 98 would surely not want to go through that again and we survived both times by a hairs breath.
We're to good to go down really ?
1994 team 1998 team

I would take the 94 team over our current team in a heartbeat, Even the 98 team includes maybe 5 who are better than we have got.

Ultimately the buck stops with Moshiri.I will always grateful to him for building the new ground if it happens but his football decisions have been atrocious and he can't keep making the same mistakes he seems to ready to take advice from people who are just as clueless as he is.
As a businessman he surely must know that you succeed or fail by your recruitment .
Click to expand...

The 94 Wimbledon game was life and death but reality is that team would have swanned back up from relegation - Mike Walker was just a very strange anomaly in our history. Things were still together off the pitch.
The 98 team though? We go down then and we'd be playing the likes of Fleetwood town to this day. Would have absolutely buried us. And you're right it's close as to whether that side is better than the one we have right now - it's clearly stronger than yesterday's team.

Don't be ridiculous.
Absolutely no chance of EFC being relegated.

20/1 odds though if you are feeling particularly pessimistic.

The airing of relegation fears has become an autumnal tradition around here over the past five years or so.

ForeverBlue92 said:
I want success above anything else
Click to expand...

ForeverBlue92 said:
The 90's were a dark period but christ an FA cup final win, last day great escapes, dogs of war - give me that emotion and rollarcoaster ride over these last 5-6 years any day of the week.
Click to expand...

? Success isn't the 90's. It's not relegation, or relegation battles. It's not play-off final wins. I don't want us to be crap just so you can get a bit of a semi on. I gotta question anyone who wants us relegated just so he can feel a bit excited. That's kopite talk.

neil999 said:
Tbf getting relegated in November while in 11th is pretty bad going
Click to expand...

We're within 1 loss of potentialy dropping 5 places to 16th. Given that game is the team directly below us. And the run of 4 fixtures after that one.
Unless this lot grow a pair(and fast) i cant see Everton going any other direction in the next month other than downwards.
Here's hoping im wrong.