Just watching the arsenal match and I can see they have a few decent youngsters, as have Man U who have named a few in their team for tonight’s Europa League match. My question is who do we have that is really knocking on the door for the first team? Surely given our recent success at the youth levels we must have a plethora of talented youngsters looking to breakthrough?

Ring master said:
Everton u18s beat Blackpool 4-3 in the 1st round of the Interfit senior cup [Lancashire senior cup] - not sure on team or scorers yet if they are give, I knew we were 2 up in 1st 10mins with the 3rd just after the 30min mark with the 4th comming soon after,

Blackpool got one back on 46mins [Cameron Antwi], we then had a player sent off for handball on the line on 47mins but Our keeper saved the pen,but Blackpool got 2nd [Ewan Bange] on 53mins with a 3rd [Rob Apter] comming on 74mins

- 1st round games are spread out over weeks, they are now in the Quarter-Finals, not sure when the Q/F draw is but Games have to be played by November 30th

After beating Blackpool 4-3 in the 1st round,EVERTON u18s NOW PLAY AWAY TO BLACKBURN IN Q/F of the Interfit senior cup [Lancashire senior cup] - date to be decided-has to be by November 30th

Stephenlloyd said:
To be honest is the negative football and playing a totally different system to the first team. Now whatever system we all think is the best system to play. Silva & Brands decide the style and sign players to implement it. Unsworth to me plays a David moyes style. And surely it should be the same all the way through the club.

Don’t get me wrong the under 23’s have some talented players IE Gordon and can play good football, but I remember towards last season when they were going for the league, it was all long ball and defensive tactics. And the cup final against Newcastle, was a shocking performance. Once we went one up, he took an attacker off and shut up shop. I think Newcastle even went down to 10 and we still didn’t really change, we got lucky as the missed a late pen. All the goalkeeper did was kick it long to the striker. Hornby I think it was.

It’s like someone said imagine Gordon training with the under 23’s and learning a defensive style while watching the ball go over his head on match days. At a very important time (17 to 19) of his development. And then he goes up to the first team, and is then training and playing a totally different style and system.

Luckily it looks like he’s already training with the first team. Maybe I’m being harsh on unsworth. But before Brands it didn’t seem anyone was on the same page. Koeman, Walsh, unsworth, the under 18. Abs that needs to change.
Click to expand...

I was at that Newcastle game, terrible, Newcastle had most of the game after Feeney scored, the game was very poor,I was terrifyed Newcastle were going to equalise and Imwould have been stuck there for another thirty minutes of boring football !!!

do you have the stats handy rather some random anecdotal quote from the swansea manager?

Championship sides will inevitably have younger sides, partly because they're more likely to have pushed people into the first team at a lower level (don't forget our best young players tend to be loaned out to the level that these teams are actually playing at) and partly because they can't afford to keep hold of players, and so release them earlier. We used to do that in the Moyes days, but once the financial pressures were eased we were happy to keep players for longer to see if they came good.

I don't know about the average age of the average team, but when people were going mad on here about the team we put out against Leicester in the first game of the season, it was pointed out that Leicester had a 22 year old and 5 21 year olds playing, I think their youngest starter was 19.

Remainder Its Brighton u23s v Everton u23s tonight, ko 7pm, that game was down to be shown Live on Brighton website were you needed to make a free log in to view, but that info about the Live game has now disappeared-so i am not certain if its still on or not till later if link appears closer to ko again ,a win for Everton will put them top depending on other scores 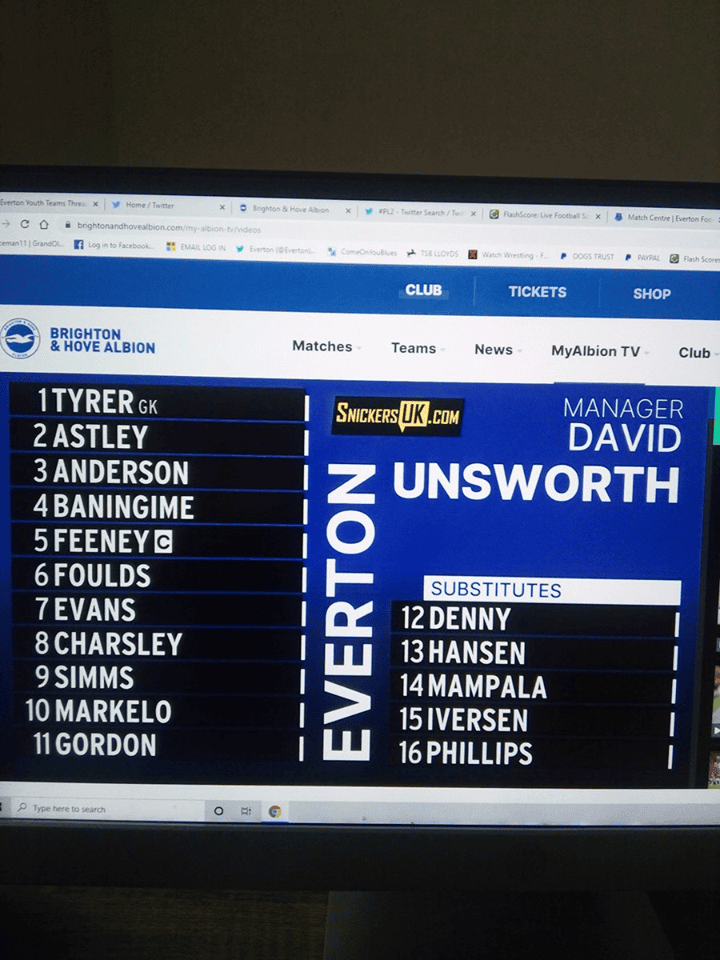 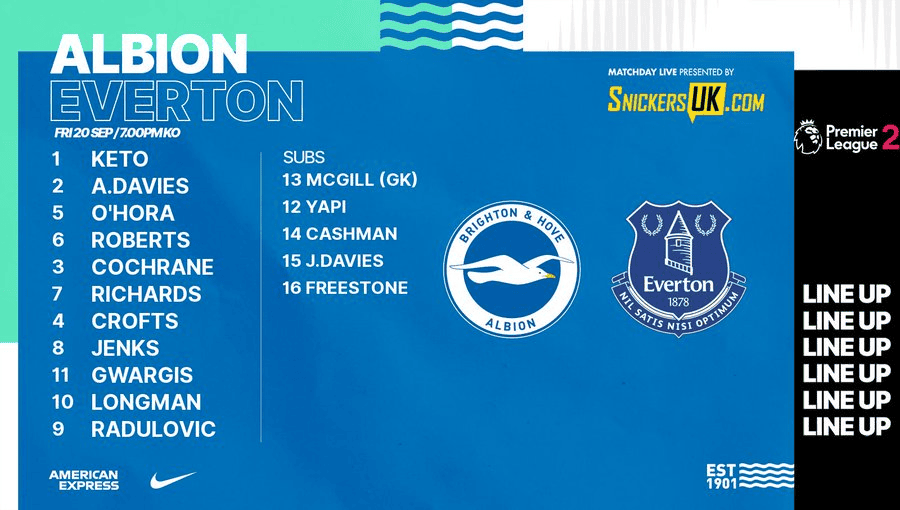 LIVE Stream,as said you may need to make free account

Was it a good goal mate?

maccavennie said:
Was it a good goal mate?
Click to expand...

,long ball,Gordon ran down the left,cut back in and shot with his right-make a quick account above,and watch mate

,long ball,Gordon ran down the left,cut back in and shot with his right-make a quick account above,and watch mate
Click to expand...

Just got in, starving so making some chops. I'll use your updates to keep me going mate

Forum Supporter
Went through the whole sign-up rigmarole but the video won't play. Oh well, over to Jonjoe in Germany...

atrottel said:
Went through the whole sign-up rigmarole but the video won't play. Oh well, over to Jonjoe in Germany...
Click to expand...

should play no probs,only email and pass needed after it,comes up with ad,just skip it and works,should have been 2nd for Everton there really as well on 27mins

And again,good chance for Gordon,long angled ball,Gordon does not connect how he should and easy for keeper,31 gone