-Rob- said:
Is that even possible at my age?
I thought kids were woke.
Click to expand...

Brisan123 said:
I will ask as I’m sure there are a few scratching their heads
What is WOKE
Click to expand...

The adjective 'Woke' is gathering wide usage by political commentators in Australia and is always meant to be insulting. I haven't been able to work
out why.

Sorry, I’m not sure you have what it takes to be a chartered accountant

Jeff Jones said:
The adjective 'Woke' is gathering wide usage by political commentators in Australia and is always meant to be insulting. I haven't been able to work
out why.
Click to expand...

Papa Shango said:
Why is anyone going to give money to a mediocre team who has not won anything in aeons?
Click to expand...

Just got around to watching that short interview she did at the end of the AGM. She comes across well like.
O

A bit of a nothing article but references that DBB headed up our community programmes previously and our good community work. I think her appointment as CEO really shows that we are really trying to be a 'People's Club' (not taking away from her skills/experience/capabilities). The more we aspire to be a filthy rich global club and brand, the greater the risk we lose our identity. Some might complain about her appointment as not business-astute but I think it's very astute in terms of ensuring we don't lose our identity or ethos. . 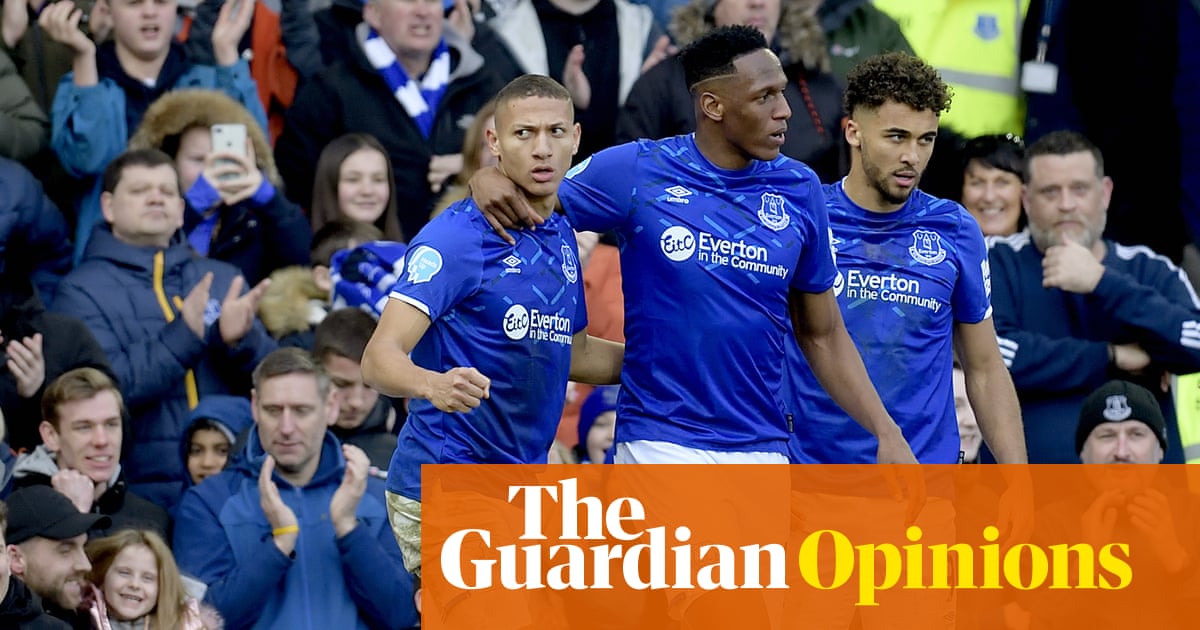 If Premier League clubs want recognition for their work off the pitch, then rejecting sponsorship from bookies is the best way forward and Everton showed how against Crystal Palace

In a climate of serious concern finally rising about football’s drenching with gambling adverts, Everton showed a glimpse of a better future at their home match with Crystal Palace on Saturday. Rather than promoting to the watching world Everton’s sponsor, the Kenyan betting giant SportPesa, the players wore a name across their shirts that looked very much more appropriate for the self-styled “people’s club”: their own Everton in the Community programme.
It was a one-off, Everton taking advantage of the single match a season when clubs generally can promote a good cause rather than their commercial sponsor, which, for 10 of the 20 Premier League clubs, is an online gambling company. Palace were wearing the name of theirs, ManBetX, reported to be a Filipino-owned sports betting and casino outfit, operated by a company registered in Malta.


Sporting the name of their well‑regarded community programme looked right for Everton and a clear solution to two major challenges for the Premier League highlighted by the new chief executive, Richard Masters, in his first media interviews last week. First and most obviously, as the government begins its review into gambling regulation, which was unleashed so dramatically in 2005 after decades of behind‑frosted‑glass restrictions, it would be such a better look for clubs.
Masters talked about resisting any moves to ban gambling sponsorships, saying football and betting have a long association – which felt like an unattractive, unconvincing line the league has decided to take. He acknowledged that “governance” should be stronger, “particularly to protect the vulnerable”, but said that overall the Premier League is not “sniffy or judgmental” about its embrace by gambling.
It seemed an oddly casual approach. The alarm is being sounded more strongly than ever now about the transformation of sport’s traditionally controlled association with gambling into relentless marketing online, on shirts, on hoardings, on television.
The legal relaxations coincided with the revolution in mobile phone use, which has made gambling, mostly on apps, much more immediate and, some experts say, more addictive. Dr Darragh McGee of the University of Bath has warned of the “gamblification” of football after he studied the lives of young men who could no longer watch a game without betting on it and suffered dire consequences to their finances, mental health and relationships.

One of the most heart-wrenching campaigns for stronger regulation is Gambling with Lives, set up by Charles and Liz Ritchie after their son Jack, a sociable, “normal” young man and football lover, killed himself in 2017 aged 24, having become addicted to gambling.
Advertisement

The other challenge for Masters, to which Everton’s shirt on Saturday presented a clear solution, was his corporate mission to gain more recognition for the community work the clubs do. Before the long, blighted search for a chief executive to replace Richard Scudamore was called off with Masters’ in-house elevation from caretaker to the job itself, a senior Premier League source told the Guardian that this was part of the brief. The clubs spend significant resources on their community programmes – the most recent figure provided was 3.6% of the last £8.4bn three-year TV deals – and they want more recognition. The programmes have developed to work at the sharp end: with police, education authorities and social inclusion agencies to help disadvantaged people in tough neighbourhoods.

The area around Goodison Park is one of the country’s most deprived and the community programme works with residents, refugees and people who are homeless or suffering addiction problems.
The club’s chief executive, Denise Barrett-Baxendale, ran the community programme first and Everton are committed to continuing this work when they move to their planned new stadium on Bramley Moor Dock. Barrett‑Baxendale acknowledged at the club’s AGM last month that “in an ideal world” they would prefer a “different type of sponsor” than a gambling company.
SportPesa grew and became vastly profitable in the relatively unregulated gambling environment of Kenya, where senior politicians soon became alarmed at the levels of addiction and indebtedness of young people drawn into online betting.
Masters and the clubs are more likely to gain the wider appreciation they seek if their good works are not perceived to be jarring with commercial voraciousness, evidenced most clearly by selling their shirts to gambling companies. If the clubs turn such sponsorships down and promote their own programmes, their claim to have their communities at the heart of who they are will be more credible, and mean more, because they will have put their money on it.
For free help and advice about problem gambling visit BeGambleAware.org or call the National Gambling Helpline on 0808 8020 133

Not this reference specifically but the term snowflake seems to be used more widely.
Is there any link to snowflakes being seen as white only?
Are we discriminating in use of the term in anyway?
Any clarity welcomed

AsiaAsia82 said:
Not this reference specifically but the term snowflake seems to be used more widely.
Is there any link to snowflakes being seen as white only?
Are we discriminating in use of the term in anyway?
Any clarity welcomed
Click to expand...

Dunno. I thought it meant fragile, easily melted. Like a proper GOT meltdown, but outside if GOT. Gets upset over every little thing.