Keys sticking the boot in

Forum Supporter
Odds on with paddy power
B

davek said:
Actually he was supposed to be their weak link and he had a decent game.

It was a close match that Brentford won but Everton edged in terms of chances created.

Away from all the bluster that's about the only way of assessing that game.

The players are with the manager, they are willing, but they just lack a leader in defence, a goal scorer and some confidence.

That'll come sooner or later. And it's my belief the owner wont push the panic button without handing the manager time and some cash to arrest this. It makes no sense to hire a manager and sack a manager without backing him with time and cash...even Moshiri has done that to a degree with the others.
Click to expand...

Benitez, in my opinion is not in any danger whatsoever of being removed.
He inherited a problem, financial and playing staff and will be afforded the time to sort it.

There is a reason Benitez was appointed and it wasn't because we had a strong squad and an unlimited budget,

maccavennie said:
I'm not saying the owner will want to sack him Dave, football is a results driven business. You willing to wait another 4-6 weeks for a win?
Click to expand...

Mac if we wait another 6 weeks for a win it may well come to late for us. We need a change of results or a change of manager preferably both and as soon as possible.

Actually didn't mind what he said through most of that... then right at the end he says 'give it to Big Dunc'

BigDuncTributeBand said:
Yes the board are incompetent, the players are cowards but… Rafael’s not blameless here.

The players look beaten before they go on the pitch, they look completely dispirited. His knives to a gunfight mentality is transferred to the players, set up not to play football and cross your fingers for a goal out of somewhere is the sum total of the plan and frankly, the players don’t look like they believe in it, far less enjoy it and get up for it.

Having lost Siggi and James our principal creators last season, he’s then changed the tactics so that our other most productive attacking outlet by far, Lucas Digne, hardly crosses the half way line. The team didn’t have a lot of goals in it last season and he’s decimated the chance creation that was there and replaced it with nothing. Who’d have thought we’d struggle to create or score.

We don’t look like we have any idea what to do with the ball, we don’t even look like we want the ball. Disorganised in defence, no plan when we ‘attack’. The squad’s crap but Rafael’s really got them plying badly.

A terrible brand of football and if he is here for the next 2/3 years, concerned at the type of players he’d be signing to fit into his style.
Click to expand...

As is the Red Echo.

Which is very surprising, considering how he behaves when the local press start criticising him.

Nice bit of casual racism from hairy hand their

As much as you’d like to, even you can’t re write a league table to suit your agenda.

Benitez must've been abit of a rogue when he first rocked up in the city with the rs. So many defending this farce like they're defending their Da.

Toffe3m4n said:
Actually didn't mind what he said through most of that... then right at the end he says 'give it to Big Dunc'

Yeah that was interesting haha! Not sure about the whole Everton for sale thing. If Moshiri genuinely wanted out then he’d surely be making it known publicly or appointing someone to sell the club. Quite possible that intermediaries are constantly quoting prices for PL clubs mind you! Big market for them in the sports washing world!

blueblue said:
Benitez, in my opinion is not in any danger whatsoever of being removed.
He inherited a problem, financial and playing staff and will be afforded the time to sort it.

There is a reason Benitez was appointed and it wasn't because we had a strong squad and an unlimited budget,
Click to expand...

Yes and I bet he was brought in too keep us compact and tight defensively and make us hard to beat with good organisation, he's delivered none of that and has lumped us with Rondon added to the dead wood already here. He has been shocking.

Give the whole club a lift and sack him

roy vernon said:
Mac if we wait another 6 weeks for a win it may well come to late for us. We need a change of results or a change of manager preferably both and as soon as possible.
Click to expand...

The bookies now saying odds on - not saying they are always right but I suspect certain wheels are now in motion behind the scenes. 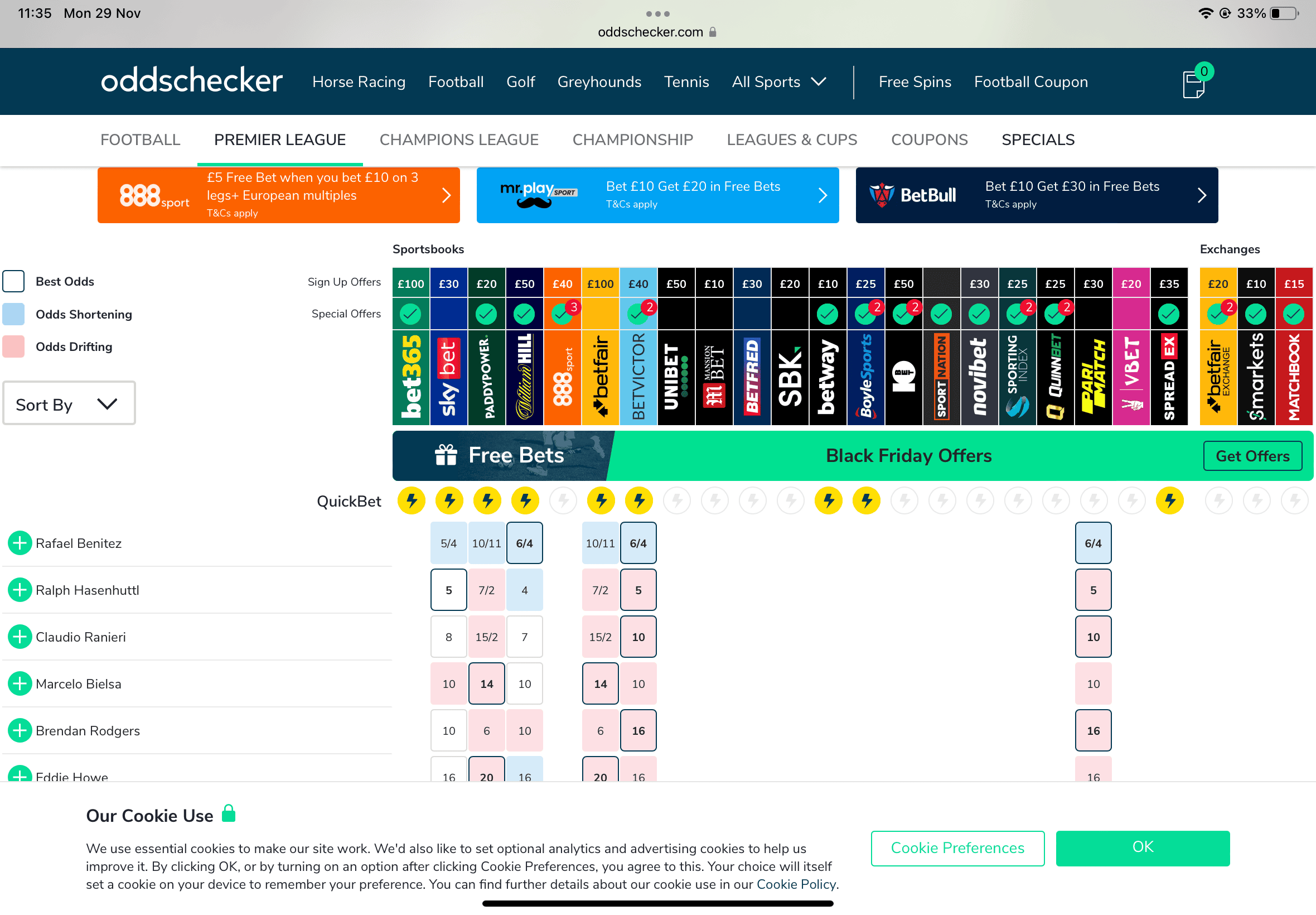 ….4-1 last week, now odds-on favourite in a few places (Paddy Power & Betfair are the same company) to be next PL manager to ‘leave his post’.