Bainesy's Left Peg said:
Staggering isn’t it:
“And, if Coventry is anything to go by, supporters are unlikely to have to worry about where to get their shopping on the way home from games. A good goal kick behind the Ricoh Arena’s Jewson Stand is one of the biggest Tesco stores you are likely to see. A sign of the future perhaps?”
Christ on a tricycle

Halliwell Jones in Warrington is right next to Tesco. All I've ever got from there after a game is a parking ticket.

Bainesy's Left Peg said:
Staggering isn’t it:
“And, if Coventry is anything to go by, supporters are unlikely to have to worry about where to get their shopping on the way home from games. A good goal kick behind the Ricoh Arena’s Jewson Stand is one of the biggest Tesco stores you are likely to see. A sign of the future perhaps?”
Christ on a tricycle
Click to expand...

Imagine it's nice weather, straight to the tesco for some cans and chill in the car park.

MickA said:
It looked so much better with a 3 tier main stand but guess that was dropped when we settled on 52k unfortunately. 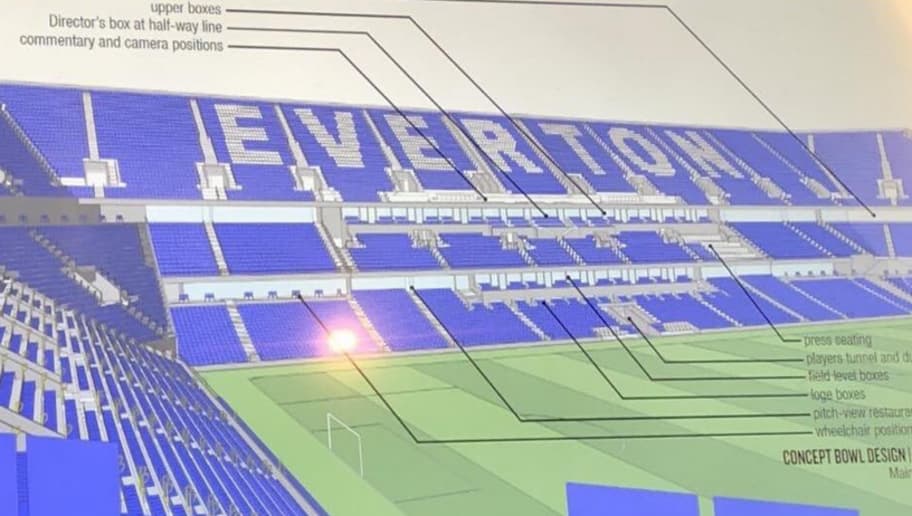 I don't think that added a massive amount extra, I'm sure the massive stand behind the goal is where a large proportion was lost. On the original renders I'm sure that was 17k capacity and on the new renders it's now 13k. So that 3 tier stand looks bigger because the stand to the left of it is bigger.

BigBlueNose said:
add to the fact that if safe standing 1:2 ratio does come in , then every club will be able to increace capacity, not just us … so spurs and arsenal could go to 75,000 if we up ours to 65,000

essentially we will always be at least 10,000 seats behind 'the competition'
Click to expand...

Thats not necessarily true. A huge part of any ability to increase is due to space provision outside of the seating area, number of toilets etc. For e.g,with the Kop at Anfield being as it is, they couldn't simply put in rail seating and increase capacity, as they do not have the facilities on the concourse to safely allow it, the standards now are very different to how they were when the Kop was all standing. In fact, I may be wrong but I believe that as the seating is currently arranged in Anfield, with them being pretty much mimimum permissable depth and width across the majority, they are pretty much maxed out. Another reason for the need for new stands.

The binman chronicles said:
They could do but that would involve significant costs. As it stands people would hit ground level with a minimum amount of steps (or any) once in the vomitory. This way it allows people to disperse quickly instead of needing multiple staircases filling up the available lower concourse area or having a raised concourse.
Click to expand...

Also, the bigger the staircase, the more space it requires within the concourse......

BigBlueNose said:
most stadiums , well the lower league ones , were already standing .. so your point is invalid.

only the newly built stadiums MIGHT have issues.. not enough issues to not make standing and capacity increace viable
Click to expand...

Standards and permissable safe space calculations have changed very much from the days when standing was standard practice in the professional leagues. Anfield again as the point, they used to fill the Kop with loads of people, but it was well beyond what space was available to them on the concourse and facilities, hence them all relieving themselves in each others pockets though a rolled up echo.

AndyC said:
Didn't annoy me at all mate.
The club has said the stadium will be built to 52,000 seats.
If safe standing does get approved and at the expected 1:1 ratio, it simply means x number of seats come out and the same x number then get the opportunity to stand.
I don't see where or how the club intends to implement this alleged increase to 62,000.

Safe standing as I see it is a method of helping to improve crowd atmosphere, seems to work massively well in that respect in Europe, particularly Germany.

I also think that if the club think there'll be a demand for 62,000 (by whatever method) in the future, why not build to that capacity straight away?

Obviously the footprint of BMD might not allow for 60,000 to be built but nobody, to my knowledge, has actually come out and said this. I suspect financing the project is more of a factor than the footprint of the site.
Click to expand...

Its all about balance. The space is simply not available for the stadium to be 62,000 seated spectators, as the extra space that would be needed for seats will remove the capacity of the concourse. The concourse has been designed to handle 62,000 comfortably, but the space that this has required means that less 'seat' space can be provided. Maybe something will come out of this second stage of consultation, but would be interesting to see peoples thoughts on capacities with a choice of 55,000 seated at day one with capacity to increase to 58,000 with rail seating, or 52,000 at day one with capacity and facilities available to increase to 62,000 with rail seating. Don't quote me on numbers, they're hypothetical, but the point is, constraints of the site make it a very delicate balancing act.

I reckon most fans are pretty impressed with the proposed design, personally, I think it looks perfect. But thats a totally subjective opinion.

I think the line about safe standing enabling the capacity to be 10,000 more is probably doable, in an architects world, but whether the cost/return question is a positive one, I have my doubts.
Click to expand...

Personally, I think that it would be highly desirable for the club to make every square inch of the stadium work as hard as possible for them. If they have the capacity to hold 62,000, then I believe that they will be wanting that many in as soon as it is doable. Dan's response of, "the last seats are the most expensive", is only due to the space they require and the lower likely hood of them being sold. If you re getting more people in the same space, then every part of the bowl is becoming more efficient and maximising return.

ON twitter -Sorry!- they are on about a video of the build and may be a time lapse and a 24/7 live cam .Should make enough to fund the stadium if Brands sells it .

I am pretty certain (90%) that Spurs have come out and said that if safe standing were to be allowed, NWHL will never be able to go bigger than 1 person to 1 space, (I cannot exactly remember why?)

H.H. said:
I am pretty certain (90%) that Spurs have come out and said that if safe standing were to be allowed, NWHL will never be able to go bigger than 1 person to 1 space, (I cannot exactly remember why?)
Click to expand...

I think Poch said it was cos all your fans were fat mate.

maccavennie said:
I think Poch said it was cos all your fans were fat mate.
Click to expand...

If the majority of the sample of fans were my size then you're correct.

I find the regulations daft meaning that rail seats are at the bottom of the South Stand and not at the top. If you want to improve safety in standing do it where it is least safe to stand.

maccavennie said:
I think Poch said it was cos all your fans were fat mate.
Click to expand...

Beavertown and sausage rolls is how we're paying for Ndombele