1) is the seat ok
2) can I see all of the play without posts in front of me
3) can I see the play if others stand up (I’m thinking the back of the lower Bullens here)
4) will there be enough beer and food outlets
5) will I be kept dry in the rain
6) will the toilets be better than at GP
7) will I enjoy going there.

Tom Hughes said:
Most stadium architects? Dan Meis said exactly the same about his Roma design, which had 2 tier end stands with larger upper tiers and overlaps.... so the main determining factors are numbers of rows within reflective angle of those roof surfaces..... which is why some of the world's noisiest stadia are multi-tier.

However, I've said that a simple bowl effect can add unity and atmosphere repeatedly. However extrapolating that on 4 sides creates a simple bowl that won't necessarily satisfy other requirements that well. A larger St Marys etc. As I also said.... perhaps less is more and a basic bowl will suffice.

Moving the pitch 2-3 metres further away to lower the rake for the same c-value won't reduce the atmosphere at all. It can however bring the back rows of the upper several metres closer, to give them better views and the stadium greater intimacy. Or enable more rows in a larger upper tier directly beneath the roof to enhance the atmosphere as at say the Millenium. That's how sightline geometry works and that's what happens at most major large stadia.

I've mentioned the Gwladys Street, because the South stand is only 2 rows more than it, (and no-one would say the street end is a large home end). I also said that the extensions into the corner lifted its capacity.... but it's hardly the super-sized home end that was in the original proposals, and for comparison is approx 5k less than Spurs' South stand. Less than the Walton Hall Park stadium. 16 rows less than Anfield's Kop but with less roof capture...... I think that had far more to do with the architect's sketched concept than any acoustic engineers input.

I'm not sure if it's really world class tbh. The exterior yes.... the interior is almost as simple as it can be.

Ferraris are not particularly well known for their practicalityy or capacity, so you might have something there.
Click to expand...

Have you just compare BMD to St Marys? Point proven I think.

Moving the first row 3 metres further back would have no effect?

Would rather the original plan. I loved the massive home end (blue wall). Still made up tho can’t wait till it’s done. best thing about been an Everton fan at the moment is the new ground.

Yes, I know that's not how to spell Allan

Tony101 said:
Would rather the original plan. I loved the massive home end (blue wall). Still made up tho can’t wait till it’s done. best thing about been an Everton fan at the moment is the new ground.
Click to expand...

I’ve been looking again at the renders in the app, and I think the home end still looks pretty steep and formidable, even if it has shrunk a bit. 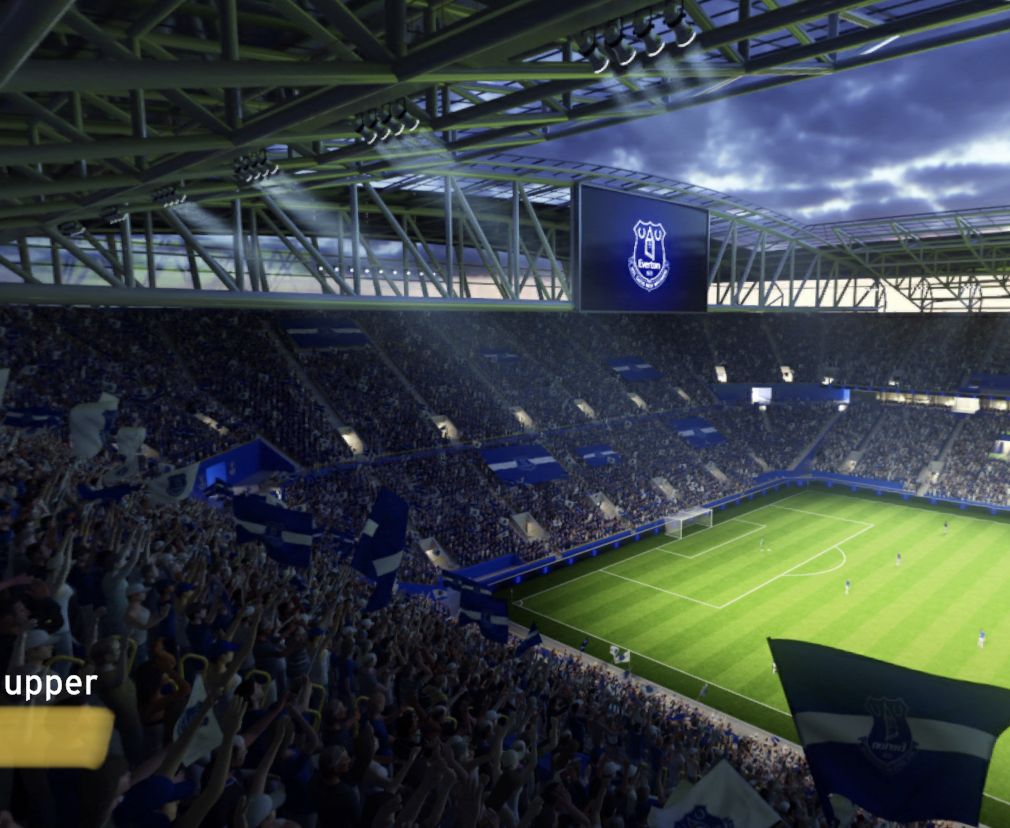 allen said:
I’ve been looking again at the renders in the app, and I think the home end still looks pretty steep and formidable, even if it has shrunk a bit.

It is mate, only slightly smaller than Villas Holte end but larger than the Kop by 500 I think it was (I checked it a few weeks ago as someone was asking about comparison to other home ends)

It should still look like a very intimidating home end

Dr Baxter said:
Tom, I know you know your onions and I do take on board some of the points you make (even with the reduced capacity it would have been better to keep the 3 tier, 2 X 2 tier and 1 tier pattern of Gooodison Park) but be honest, you were a staunch advocate of staying at Gooodison Park and even of we were spending double on the stadium and it was instantly considered to be the best in Europe you'd still find fault, be honest. I think the stadium will be fantastic and will overall be the best league ground in England. Do I think it could have been even better? Of course I do.
Click to expand...

Not at all.... I was only ever a "staunch advocate" of doing a proper independent study of that option, to use as a baseline comparison of all other options. If you read the planning application, you'll see that still hasn't been done properly.

I am also not a bit averse to moving per se. I voted for the Kings Dock stadium. I was also involved in a group that spoke to Peel about central docks about 15 yrs ago (paying for the transport study myself), and was also involved in the discussions for the Bestway site too...... so I think I've demonstrated repeatedly that I'm certainly not against a move.

I was staunchly against Kirkby, and I think those concerns were fully vindicated..... when some here were probably happy clapping their way up the east lancs at the sight of first CGI with its Batman lights.

peteblue said:
2) can I see all of the play without posts in front of me
Click to expand...

Just another reason why I wish to sweet Lucifer that Everton had their house in order. We should be discussing on field matters. Instead we are bickering over the finer points of a CGI rendering of the new stadium. I hate you Everton.

You're a good man.
Thank you

Thanks pal
Look forward to your weekly videos
Amazing footage thanks for the effort and time you put in !

Nope, fully behind KEIOC.
But by your tiresome comments on here you would have preferred to tart up GP and seem bitter that it didn't happen

allen said:
I’ve been looking again at the renders in the app, and I think the home end still looks pretty steep and formidable, even if it has shrunk a bit.

Juventus' Allianz Stadium is what you call steep: 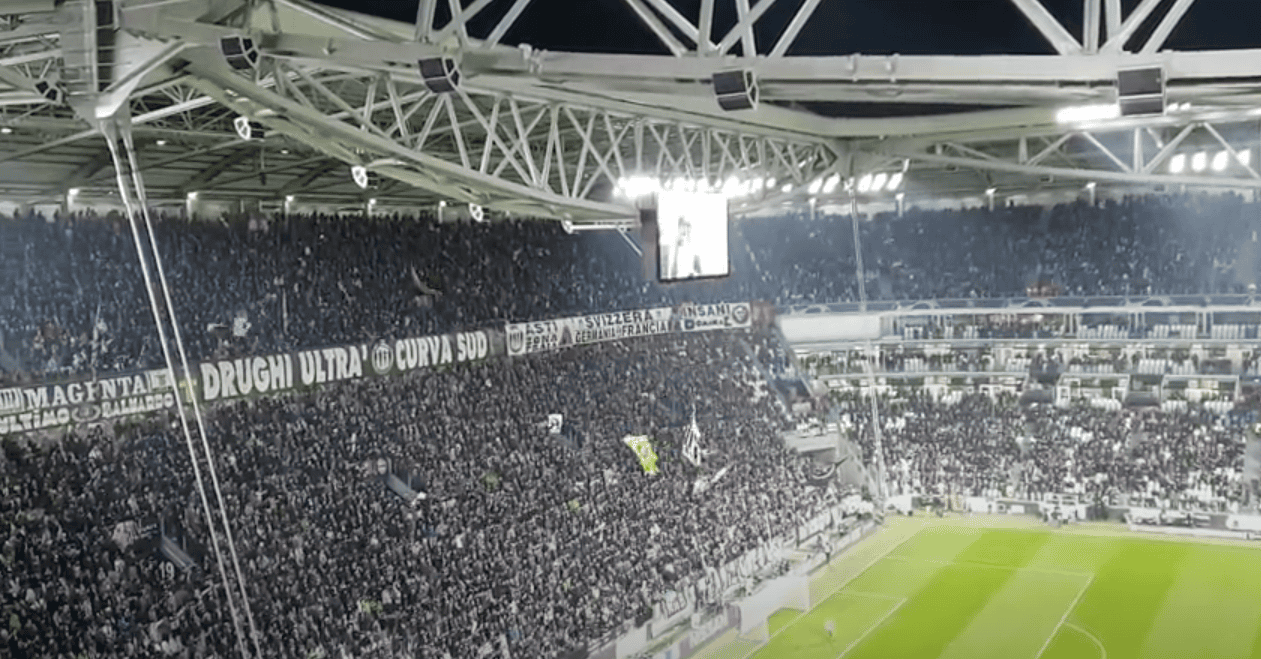 maccavennie said:
It is mate, only slightly smaller than Villas Holte end but larger than the Kop by 500 I think it was (I checked it a few weeks ago as someone was asking about comparison to other home ends)