This thread will automatically update every 30 minutes or so with the latest Everton news from a list of approved sources.

Basically, this is a news aggregator which we can manipulate to ensure a degree of credibility, removing sources which are link bait/nonsense.

It's a work in progress but we hope in time it'll prove useful. We'll see...

"We were brilliant all over the pitch" says hero Joel Robles

Everton have drawn Chelsea at Goodison Park in the quarter final of the FA Cup.

Chelsea will travel to Premier League rivals Everton in the FA Cup quarter-finals.

Everton will face Chelsea in the pick of the FA Cup quarter-finals. 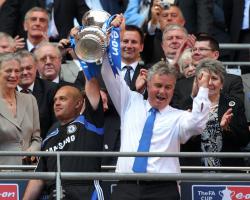 Roberto Martinez's men progressed to the last eight with a 2-0 win at Bournemouth on Saturday, while Chelsea cruised to a 5-1 victory against a young Manchester City side at Stamford Bridge on Sunday.

The last-eight clash is a repeat of the 2009 final in which Louis Saha opened the scoring for Everton after 25 seconds, only for goals from Frank Lampard and Didier Drogba to turn the match in Chelsea's favour.

Chelsea's current interim boss Guus Hiddink was also in charge for that match.

West Ham's reward for a 5-1 win at Blackburn is a trip to Shrewsbury or Manchester United, who go head to head in the fifth round on Monday night.

Reading will host Crystal Palace in the other last-eight clash, with matches to be played from March 11 to 14 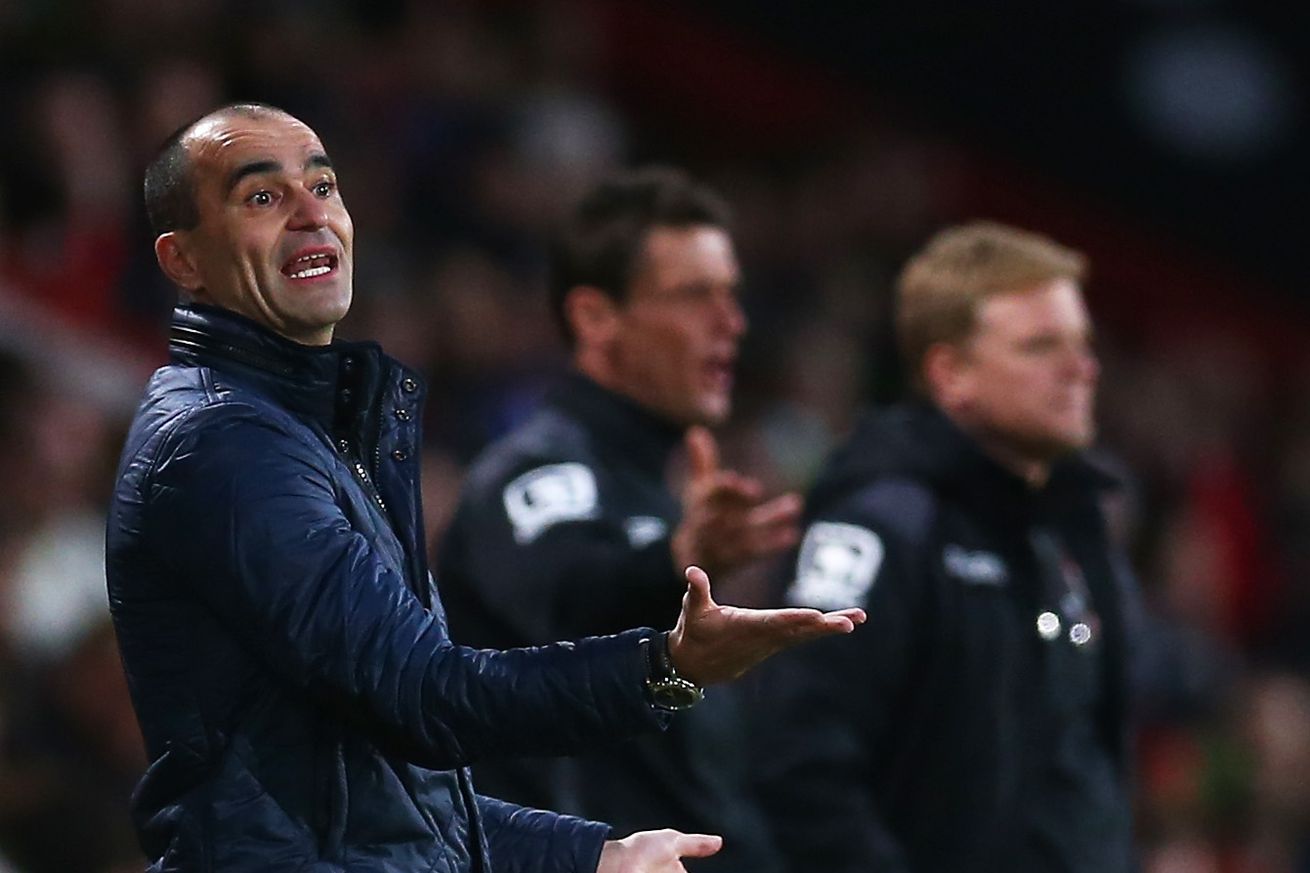 Everton and Roberto Martinez utilized a straightforward gameplan in their fifth-round FA Cup match, continuing a trend from the past few weeks. After frequently over-complicating things in the first two-thirds of the season, have the Toffees found their way with this lineup?

For much of this season, it has felt like Roberto Martinez has been trying to outsmart himself. Say what you will about the Everton manager, but he isn't stupid. Stubborn? Most certainly. But stupid? He would not have been able to reach this stage if he simply wasn't that bright.

That has made it even more frustrating to watch Martinez over-complicate things with a team that has enough talent to play a simple game. This year alone, we've seen Martinez try to utilize a striker at left wing, instruct left wingers to play entirely too centrally, force Ross Barkley into wide areas as a result, not utilize his attacking full-backs to their full potential, and create entirely too predictable attacks, all while managing to still have an underachieving defense.

It may seem counter-intuitive then, that Everton's arguably best stretch of the season has come with a central midfielder at left midfield and the team's top assist-getter on the bench. Though it seems, at least at first glance, like these choices would continue to over-complicate things, Martinez has in fact stumbled upon a combination of players that is greater than the sum of its parts.

After months of lineups where the opposite seemed to be true, the Spaniard has been wise to stick with the lineup he used in Everton's match on Saturday.

Aaron Lennon and Tom Cleverley continued their runs on the wings, with Bryan Oviedo still preferred to Leighton Baines at left-back. The heart of the team remains Gareth Barry and James McCarthy, who are playing in front of Ramiro Funes Mori and Phil Jagielka.

The key to Martinez's new setup has been balance in both attack and defense, which often lacked early in the season. This balance played a huge role in Everton's success against Bournemouth on Saturday.

This means that both of Everton's wide midfielders got on the ball in wide, dangerous areas, as the heatmap of Tom Cleverley and Aaron Lennon shows (courtesy of EvertonFC.com). 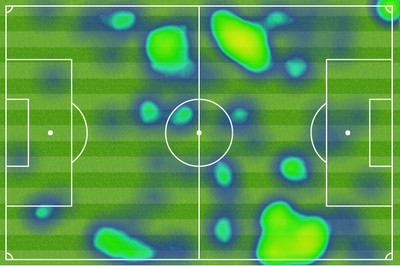 Both players occasionally checked into central positions, but largely kept the team's width. With the wide players actually staying wide, the team's holding midfielders had varied options to pass to when the team recovered the ball in the defensive and middle thirds of the pitch.

As you can see, McCarthy and Barry sprayed the ball out to each wing pretty evenly, keeping Bournemouth's defense honest.

Lennon and Cleverley provide balance in more than just this way.

In Seamus Coleman, Bryan Oviedo, and Leighton Baines, Everton has some of the most dangerous attacking full-backs in English football, yet wingers like Arouna Kone and Gerard Deulofeu have often marginalized these players.

Both Cleverley and Lennon do a great job of including the full-backs in the attack, in two important ways.

First, both players are defensively responsible. For the full-backs to get into the attack fully, they need to know that they're going to have defensive cover if the ball turns over.

Lennon and Cleverley are, without a doubt, the team's two most defensively responsible wide players. Their heatmap above shows how frequently they are in their own defensive third, providing cover.

Second, both players have a strong sense of when to drift into the center of the pitch. Arouna Kone and Kevin Mirallas have been guilty of wandering into the center from the left too frequently, isolating the left-back, while Gerard Deulofeu often adopts such a wide starting position that he gives the full-back no space to run into.

Lennon and Cleverley both have strong tactical awareness, understanding when to move closer to the center, both to get onto the ball themselves and to clear space for the full-backs.

The result of all of this is a heatmap and passing map for the full-backs like we see below. 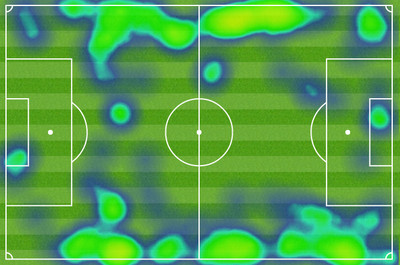 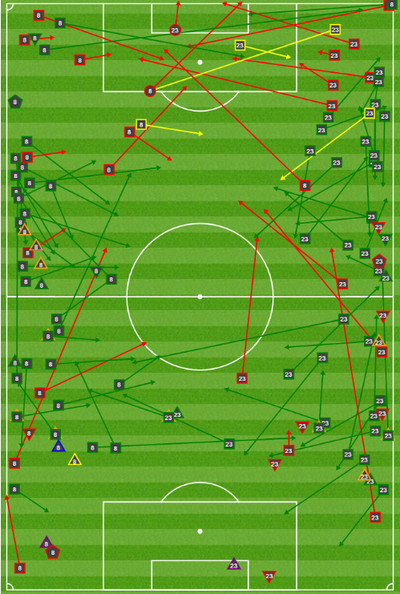 Bryan Oviedo and Seamus Coleman regularly got into the attack and managed to create four chances. It is worth saying the the execution from these players (and a lot of Everton players, in fairness) was less than stellar. The Toffees in general were not at their sharpest in the middle and final thirds, but it was not because players were not in positions to succeed.

The upshot of tactically sensible play in the wide positions is often open space in the center of the field, where a team's No.10 can get onto the ball and make plays.

It is no surprise then, that Ross Barkley's best stretch of the season has come along with these changes to the lineup. With wide players attracting defenders and making smart passes, you end up with a Barkley heatmap like the following. 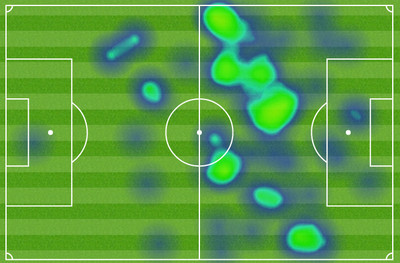 Barkley is all over the middle and attacking thirds, exploiting space across the pitch as it is opened up by the intelligent movement of Everton's wide players.

In all, it feels a little silly to say that Everton's success has come, at least in part, as a result of playing in a relatively unremarkable fashion. But, I think there is definitely something to this line of thinking.

Everton has talented attacking players and competent defenders. The players on this team are now talented enough that they don't need a particularly astounding gameplan; they just need to be put in a position to make plays.

By including Cleverley and Lennon in the lineup, focusing on fixing the team's defense, and allowing his players to simply make plays, Roberto Martinez has given the Toffees their best chance to win.

Of course, there will be times that Everton needs a more intricate gameplan. In the loss to West Brom, the Toffees needed a way to break down a compact defense after conceding an early goal, and Martinez failed to come up with it. Against top teams, Everton may need to make changes as well.

But, in most situations at this stage, the Toffees have enough talent to play a simple game and earn positive results. With this lineup, Roberto Martinez has found balance and propelled his team toward success.

Considering Roberto Martinez’s intention is to salvage a poor season with success in the FA Cup, the emergence of goalkeeper Joel Robles in goal has been extremely convenient.
Read Full Article