an absolute natural, who has instantly struck a rapport with those that've been here longer but look to him for steadying influence and confidence. 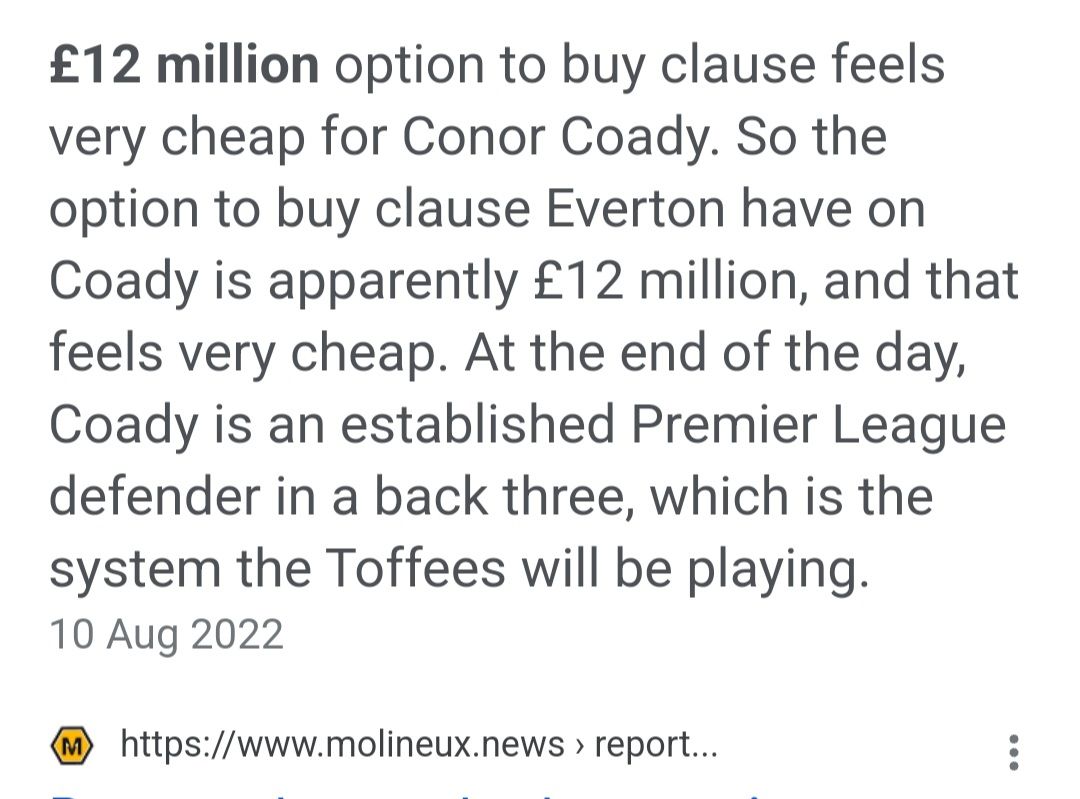 Player Thread Sponsor
Could listen to him talk for hours.

Nymzee said:
Could listen to him talk for hours.
Click to expand...

He'll go straight into the media as soon as he hangs his boots up.

Forum Supporter
That interception that went just past the post to stop Antonio getting a tap in, Keane leathers that in the top corner.

ToffeeScot said:
I have to hold my hands up and admit I didn't rate him much before he signed but completely reverse that. He does make little errors now and then but the leadership he brings to the side is phenomenal. We would be far worse without him there.
Click to expand...

Really? I always thought he was very good, sometimes great anytime I saw him. Still shocked Wolves let him go out
Guess Lage wanted a Portugese captain for 7/8 portugese first teamers and this was one way to make that happen.
Lampard obviously laughed at that notion of an experienced quality CB not being able to play in a 4.
So far so good anyway, sign him up

Any misgivings about his commitment to the club because of his past affiliations with Liverpool are surely dead in the water now. He gets it.
C

Just read £12m above. Wonder is that then a 3-yr contract on top.

Wasn't Ashley Williams great for Swansea at that age!

Coady said the other day that the derby match this month had the best atmosphere of any football match that he’s ever been involved with.

Doesn't matter if Coady specialise in back 3 or back 4. There are other attributes that make a good CB.

Maybe Coady is better at a back 3 but he CAN adapt to a back 4 well. Certain players are very adaptable - and it is not like Coady is switching from CB to GK.

Forum Supporter
I hope we sign him permanently for next season. Him and Tarkowski could see us through for 3-4 years quite easily...

blulouie said:
He'll go straight into the media as soon as he hangs his boots up.

You think? Can't see him wanting to be anywhere other than on the training pitch everyday myself.

Obviously that's based on absolutely nothing other than a hunch. He's just got future manager written all over him, imo.
T

Toffeepot said:
Really? I always thought he was very good, sometimes great anytime I saw him. Still shocked Wolves let him go out
Guess Lage wanted a Portugese captain for 7/8 portugese first teamers and this was one way to make that happen.
Lampard obviously laughed at that notion of an experienced quality CB not being able to play in a 4.
So far so good anyway, sign him up
Click to expand...

I thought he was okay but never a player I’d want us to sign. I’m now fully on board and would be quite keen to make the move a perm in Jan if I’m honest.

A wolves fan in peace. Here to see how Coady is getting on. From what I've seen myself he has done well and you seem to agree.

Regarding the 'wolves mad to let him go' and 'cant play in a back 4':

I think he splits opinions amongst us wolves fans as to whether or not he could play in a back 4 I've always believed he could aslong as he had someone experienced next to him and James Tarkoswki fits like a glove (he was linked with wolves numerous times) and I personally would have loved him here. The only thing that was ever in doubt is his pace but his positioning often counters that anyway.

Us as wolves fans did see it as madness to let him go but he would have been 3rd choice and we are done with a back 3. Max Kilman is probably the most highly rated player amongst our fan base alongside Neves and has been watched by Southgate too but unfortunately it was when russia first invaded Ukraine and Max's parents/grand parents are Ukrainian and his form understandably dropped for a brief period.

Collins came in and started well until Man City last week (sure many of you would have seen the karate kick on Grealish). We actually had the best defence in the league until we played man city.

However with Collins now being banned and us having the pick of 2 under 21 players to play next 3 games at CB, there isn't a wolves fan in the country who wouldn't wish for Coady to be back at the golden palace.

Coady wasn't happy to sit on the bench here so Lampard must have promised him in blood every game and glad to see hasn't let him down. Coady is desperate to be on that plane to Qatar.

Coady will always be appreciated by wolves fans for captaining us back to the premier League.