Sassy Colombian said:
Very disappointed in Ancelotti so all that talk about being committed to the club and wanting to coach us at the new stadium were just falsehoods. I have admired and followed this coach for years but no more!
Click to expand...

I was much more invested in Everton when Carlo joined as I was always a big fan. I even tuned into all his press conferences on YouTube.

I wouldn’t begrudge a younger manager going to Real Madrid, just disappointed that he left at the first opportunity and I wouldn’t be surprised if he found the club horribly run and below his standards. Sometimes from the outside before joining the club you don’t know these things and then once you join, you realised you’ve made a mistake. Also he’s never really left any other club aside from Milan when he just got tired from being there for 8 years. So I think this sends a big warning to anyone else that might be approached by Everton, if the project was so good Carlo wouldn’t have left after 18 months.

If I were a Real Madrid fan.
I would be fuming about this.
At least my bird will be made up with me not moaning about the footy we play , all I have been saying for months is if fat dam was trotting this boring rubbish out there would be murder.

terrible way to depart from Carlo.

Bebeto said:
The way I am reading this in the Spanish press is that ancelotti left Everton in a "friendly" way. This tells me that no compensation has been paid by real madrid...crazy...we are useless
Click to expand...

In no way does 'friendly' mean 'no money'.

Across the season as a whole Carlo has been poor and nothing had changed from dross of previous years. We looked off the pace in most games, unmotivated, devoid of ideas and fitness.
Aside some notable victories at the Sh!te and in London, we have been dreadful and just fudged our way through the season. If it hadn't been for Douc's and Godfrey putting in some stand out performances, and DCL chipping in with his goals, it could have been even messier. Those 3 players weren't Carlos players but boy did they do him a favour. Carlos players, hmmmm...

The last 12 games of the season were a joke and my alarm bells were ringing as we continually failed to step -or show- up.
Richy, James, Allan can go for me. I'll be sad to lose Digne and Mina but my fear is we will lose them too.

Going to be a very interesting next few days, I think we'll appoint quickly to steady the boat and get going for next season. Nuno is my preferred choice, proven record in buying good players and getting performances from them. Something we definitely need. He may have struggled this season, but I think there is a good manager there who won't accept the dross we serve up every week.

tadpole said:
Nobody, but nobody, says no to Real Madrid. I get that. I just hope that we soak Real Madrid for every penny.

Simple fact is though, first serious offer he was made, he jumped at it. It was a given from day one that big clubs would come sniffing. It was always going to be in Ancelotti's hands how long he would stay at Everton. He made the right noises, he promised that he had every intention of seeing out his contract. And he made those promises knowing that he'd be receiving tempting offers.

Should we forgive and forget because anyone would have done the same ? And if that's your view, will you still be as forgiving if he decides that he wants to take James and Richarlison with him ?
Click to expand...

Surely its a gimme Hamez wont be staying?

And if Real want Rico I wont be standing in his way.

paultheblue said:
I didn't want him to go but I am not really all that arsed in the end.
I don't think he was a good fit and maybe it's better that he goes now as the fans would not have accepted the rubbish that has served up this season.
Anchelloti was not to big for Everton ,Everton was to big a job for him.We were way out of his comfort zone and I think he knew it.
Click to expand...

I suspect that you have hit the nail on the head.

I would like to have seen him succeed over the next few seasons but more than likely we'd be paying him off and looking for someone new before Christmas or next summer anyway.

Ancelotti is just "meh" for me now. More interested to get the new guy in. I'd try for Conte but not sure if he is right either.

Forum Supporter
How depressing, screams of Everton being used until the big job came around. The joy on the forum n the coming weeks will be a joy to behold

Forum Supporter
Managers always take the bigger jobs when offered. Dunno why people are so surprised to be honest. Wish him well and hope we manage to get the right replacement. 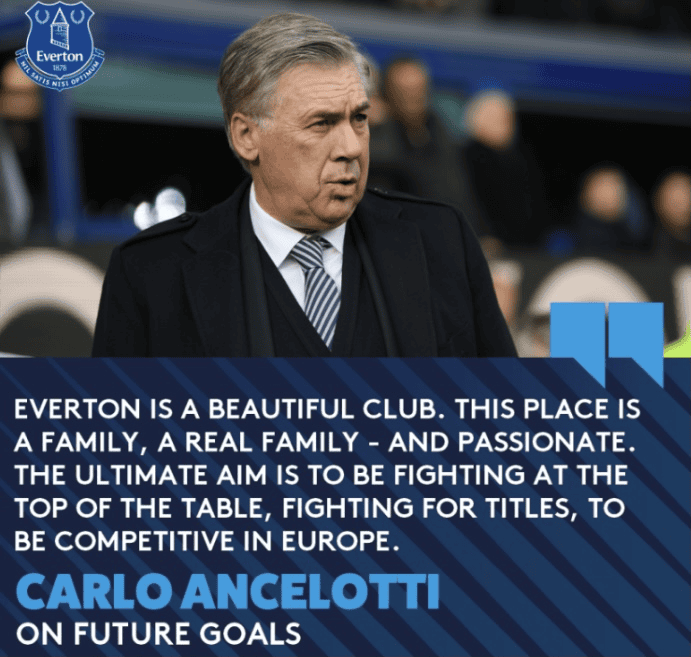 MikelsGoat said:
Surely its a gimme Hamez wont be staying?

And if Real want Rico I wont be standing in his way.
Click to expand...

We'll probably sell him to them for <40mil

Toffe3m4n said:
Reading in between the lines, he probably just got itchy and couldn't be arsed with the task that lay ahead this summer. Soon as Real came knocking it sounds like he absolutely pounced on it.
Click to expand...

There’s absolutely no professionalism there, is there? We think being nice is what will win us things, but we aren’t supposed to be some non profit charity, we’re supposed to be a football club aspiring to win things. The rs don’t even laugh at us anymore, instead they pity us.
B

Nymzee said:
Perhaps it got to the point where they (RM) wouldn't pay for him but he really wanted to leave so we couldn't keep him around if he didn't want to be here?
Click to expand...

Don't care if he wants to be here or not...like any player he signed a contract. If it was the other way around sacking him would have cost us every single penny of his 3 years contract...work both ways i am sorry