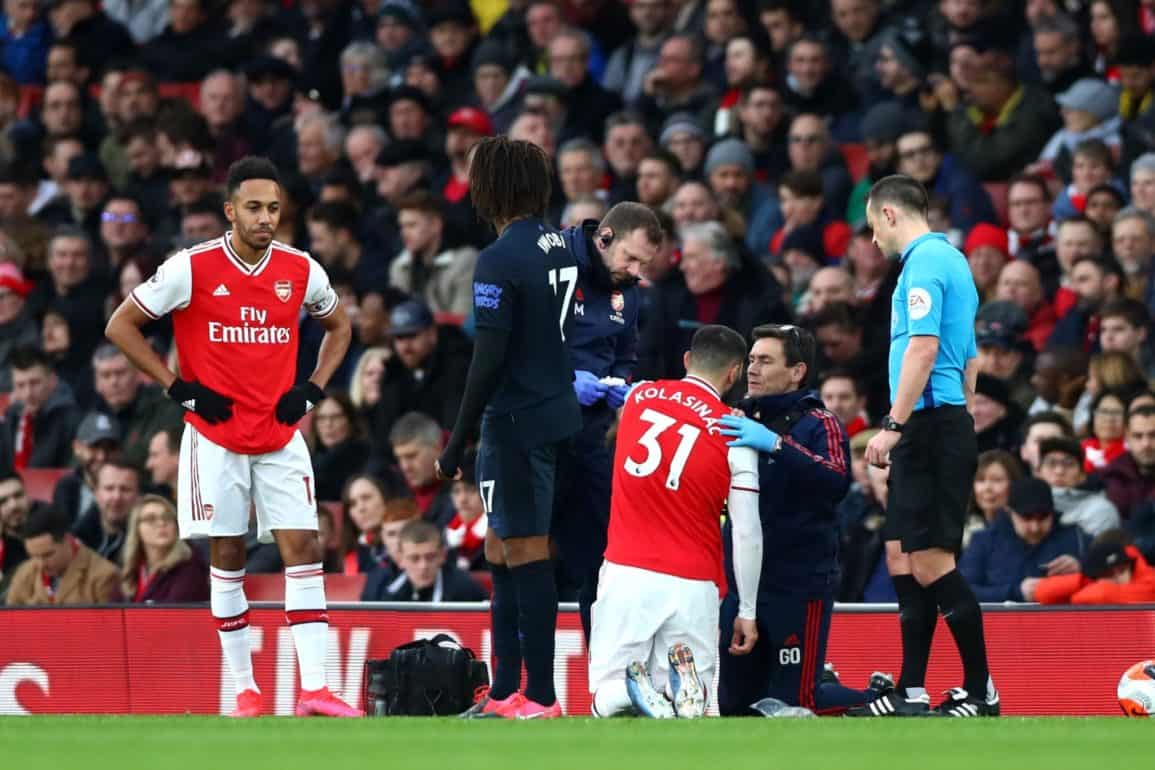 Everton’s long, long wait for a first win at the Emirates continues as despite taking a first minute lead with an acrobatic strike from Dominic Calvert-Lewin, they couldn’t keep Arsenal off the scoresheet and a double from Aubameyang saw the hosts take the points.

Carlo Ancelotti took his Everton side to the Emirates Stadium on Sunday looking to end a miserable 23-game winless streak for the Blues away at the Gunners. Only four draws have been realised in those 23 games and with designs on European footie next season, victory over Mikel Arteta’s side was a necessity.

Having returned from their successful Europa League trip to Greece, Arsenal themselves were looking to pick up three points as they looked to stay in touch with European qualification for next season. Nursing a host of injuries, the Gunners were definitely unable to call upon Cedric Soares, Kieran Tierney and Callum Chambers and were looking for Hector Bellerin, Sokratis Papastathopoulos to pass late fitness tests to be available for selection. Midfielders Lucas Torreira and Mezut Ozil were both available to face the Blues.

In his pre-match press gathering Arteta, the former Everton midfielder now in charge at the Emirates, concentrated his attention on teenage starlet Bukayo Saka who has made an effective switch from being a left-sided forward to playing seamlessly on the left side of the defence. “He’s a great kid and he’s very brave. He makes big decisions in the final third, he doesn’t hide and he’s got the vision and the ability to execute in spaces that are really tight, which is a big gift.”

With the Blues not having played for fifteen days since beating Crystal Palace, and some of the players having had short breaks before returning to training, Carlo Ancelotti had had more time to prepare for visit to the capital, and clearly recognised the importance of the fixture when he addressed the media saying, “We have to be focused on Arsenal. Then there are very important games… there’s [Manchester] United, Chelsea, Liverpool. After these four games, we can see what is going on for Europe. This is a really important game against a strong team, away, but we have to have confidence to do our best and try to win.”

Since the arrival of the Italian, Everton have taken 17 points from eight matches and Ancelotti paid tribute to the contribution of Dominic Calvert-Lewin, the Blues number nine having scoring six since the Italian took charge. “Dominic can continue this way, keep going and trying to improve. He is doing well but he can do better, he knows. But him and Richarlison are doing a fantastic job, they are really dangerous. This is what we are asking from them, to be dangerous up front.”

In terms of how the Don would set the Blues up at the Emirates, midfielder Fabian Delph was available having served his one-match suspension, Bernard has recovered from a minor knock but, Theo Walcott has a doubt with the knee injury sustained early in the 3-1 won over Palace, and Lucas Digne too with a thigh strain. A massive positive for the Blues was the return to the bench of Andre Gomes who came through a warm-up game at Finch Farm with no problems having recovered from the fractured ankle suffered in early November.

Our referee on a cool afternoon in a not full Emirates Stadium was Stuart Attwell.

And the Blues got off to the perfect start as an early foul on Richarlison by Ceballos gave the Blues a free kick that saw Sigurdsson loft the ball forward and off the shoulder of Luiz for Dominic Calvert-Lewin to score a spectacular overhead kick with barely a minute on the game clock.

The Gunners tried to respond quickly with Pepe finding Bellerin but his rising shot didn’t trouble Pickford. Sidibe then defended well to deny Aubameyang at the expense of a corner as the home side kept the pressure on. Everton countered wit Richarlison at pace feeding the ball right to Iwobi and his first time effort flew just too high and the next raid saw Mustafi deny DCL a shot with a last-ditch tackle, Arsenal defending the resulting corner in what had been a bright opening ten minutes.

Arsenal won a third corner and Pepe found Mustafi, but his header went miles over the crossbar. A cross-field ball from Holgate for Sidibe saw him collide with Kolasinac and he needed attention on his shoulder before being helped from the pitch with his right arm in a sling and replaced by teenager Bukayo Saka.

Everton were closing Arsenal down quickly before a loose pass saw Nketiah played into space on the right, but Delph kept him wide and the eventual rising shot again didn’t trouble Pickford. Mina played the ball forward to DCL and the ball broke for Iwobi but again the slightly hurried shot went too high. Pepe at the other end tried to bend a shot around Pickford ahead of the Gunners drawing level on 26 minutes, Xhaka finding Saka wide left and his cross was met by Nketiah to neatly re-direct it beyond Pickford.

Arsenal were now in the ascendency and Pickford was quick off his line to deny Ozil before Holgate conceded another corner heading behind a cross from Pepe. Schneiderlin was the first booking of the game as he manhandled the tricky Nketiah.

And having drawn level, the Gunners then took the lead as Luiz strode forward to send a perfect ball between Sidibe and Mina for Aubameyang to latch onto and coolly slot the ball beyond Pickford and inside the far post on 32 minutes.

Everton needed to regroup and get back to how they’d played the opening twenty minutes, the loss of Kolasinac having worked out perfectly for Arsenal as Saka was beginning to give Sidibe an awkward afternoon.

Iwobi found DCL in space on the left and his cross to the back post found Sigurdsson, but Arsenal cleared and got forward themselves with Holgate halting Pepe. Nketiah with a foul on DCL gave the Blues a late free kick that Baines curled into the box to find Richarlison but his header was off target. Five added minutes were signalled and tempers flared momentarily as Arsenal players reacted to a challenge by Richarlison on Ceballos that saw the Brazilian yellow carded.

Deep into the added on time, Sidibe forced a right wing corner and after Baines swung it in, the ball was only partially cleared, a Sigurdsson miskicked shot bounced up for Mina to head on and with Luiz ball watching, Richarlison found the space to clip the ball past Leno for the equaliser.

Where Everton had gotten away to a blistering first half start, Arsenal did likewise to open the second as Pepe got free on the right and crossed perfectly for Aubameyang to beat Sidibe to the header and Pickford to put the Gunners back in front with his second goal inside a minute of the kick-off.

Arsenal were now looking more comfortable and with Everton needing some more assertiveness about their play, Andre Gomes and Bernard appeared on the touchline to warm up. Good work at the back from Holgate saw him release Richarlison down the left flank and his cross for DCL was just too strong as he collided with Luiz.

Everton made the double changes on 59 minutes as Andre Gomes replaced Morgan Schneiderlin and Bernard came on for Alex Iwobi.

Bernard was quickly into the game dispossessing Xhaka to feed DCL only for his quick shot to go straight into the arms of Leno. A wayward pass from Saka saw Richarlison away down the left, his cross for DCL was cleared and the follow-up shot from Sigurdsson was well off target.

The game was crying out for one side to really stamp their authority, Arsenal to kill off the Blues or Everton to get back level, both sides needed something inspirational to decide the outcome in the final twenty minutes. Sidibe bursting forward fed Bernard whose cross found Richarlison and his header fell to the feet of DCL and his close range shot was well blocked by Leno. Gylfi Sigurdsson became the third Everton player to be booked for a foul on Ceballos as Arsenal looked to counter attack quickly.

Ozil got away from Sidibe to find Ceballos, but his curling shot was off target ahead of Torreira becoming the second Arsenal change, replacing Ceballos with fifteen minutes left to play.

Everton forced another half chance as a shot from Delph saw Richarlison gain control and Leno again was quick off his line to narrow the angle and make the save. Another chance went begging as a long ball again picked out Richarlison and he beat Mustafi to cross just too strongly for DCL to get on the end of.

Into the final ten minutes and Moise Kean replaced Fabian Delph in a final attacking throw of the dice by Carlo Ancelotti. Arsenal countered by sending on Guendouzi for Ozil.

Confusion and dithering at the back by Mina saw Pickford play a suicide ball that was picked off by Nketiah and the Everton goalies’ blushes were saved as the curling shot hit the woodwork and cannoned out to safety. A great ball from Gomes aimed towards Richarlison saw Leno come racing outside his area to make a vital interception and clearance.

Everton had made chances late in the second half, but a failure to find a clinical finish looked like proving costly. Five added-on minutes were signalled as Gomes found Baines to find Richarlison, Mustafi with a block. Everton kept the pressure on with Sidibe, found by Bernard, winning a corner that saw DCL head wide a cross from Bernard with Leno flat-footed.

Gomes again released Richarlison and his cross saw DCL climb to get on the end of it, Mustafi clearing and Gomes picking ip a yellow card for a clear bodycheck. The Blues kept pushing and Kean fired wide from 25 yards as the seconds ticked down, and what had started so brightly ended in abject disappointment as Arsenal held on to send them ahead of Blues in the table.