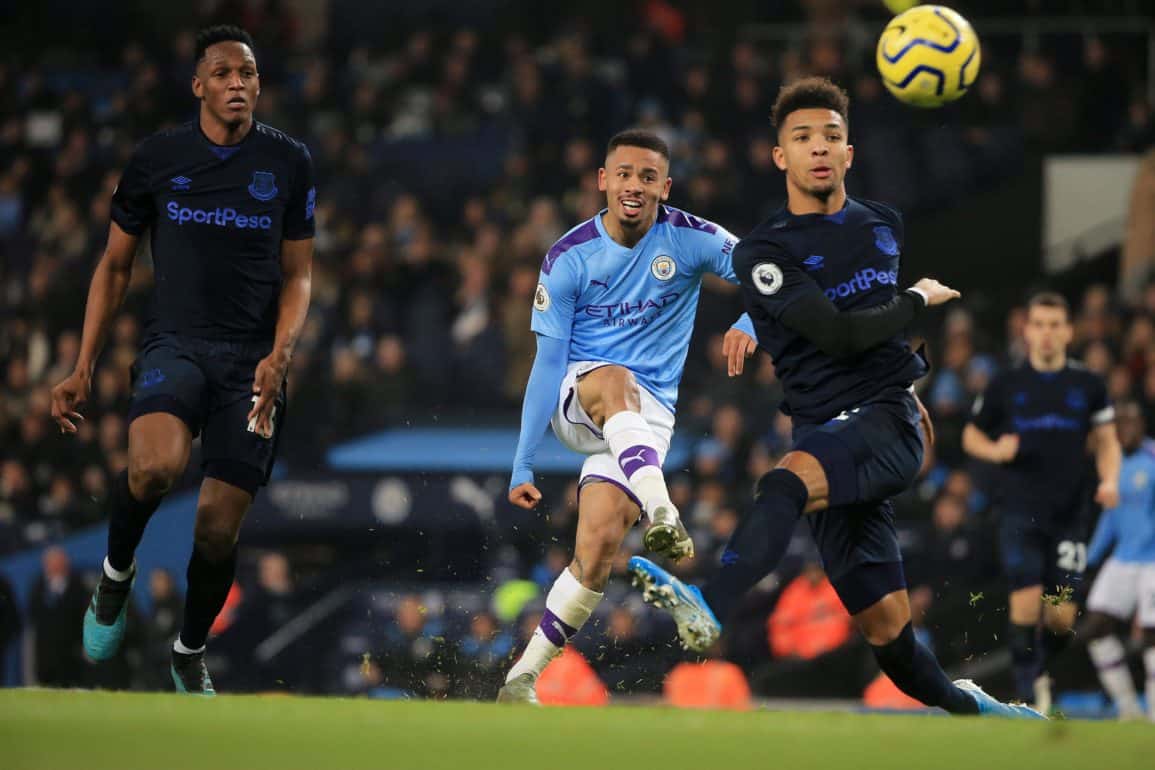 Jesus double as City prove too good for over-cautious Blues

Everton fell to defeat at the Etihad as Gabriel Jesus continued his knack of scoring against the Blues with two second half strikes. City had dominated proceeding as Everton adopted an approach that was far too cautious that saw a late fightback bring another goal for Richarlison.

Two wins in two games under Carlo Ancelotti was a terrific end to 2019 and the New Year fixture saw him take his new charges to the defending champions Manchester City for the tea-time kick off in what promises to be an enthralling January for the Blues.

City have been indifferent at times this season, having lost five games already in their title defence and yet on other days still playing some exhilarating football of the highest quality under manager Pep Guardiola. The Spaniard saw his side get back winning ways against Sheffield United but was unable to recall his number one goalie, Ederson, due to him having gone down sick having served his one match suspension for his red card at Wolves. He had a number of selection options with John Stones and David Silva both recovered from injury, while his large and talented squad offered the chance to see him involve Gundogan, Jesus and Mendy who were all rested from the starting line up against the Blades.

In his pre-match press meeting, Guardiola spoke well of his managerial adversary when he commented, “I know Carlo [Ancelotti] quite well, we played a few times against him. His teams always beat our teams but I was with him at dinner or UEFA meetings to talk with him and he is an incredible gentlemen. He conducts some of the greatest teams in Europe – the list is huge – and when that happens it is because he is an incredible manager. I think it is incredible for English football that he is back and I’m pretty sure he will be a success.”

With confidence high in the Blues camp on the back of the last six outings under Duncan Ferguson and Carlo Ancelotti, Everton went to the Etihad in much better heart than anyone could have imagined this time last month.

And our new Godfather looked forward to the game in his press conference by again praisingd the work done by Ferguson prior to his arrival at Goodison Park saying, “It will a fantastic test for us against City, to see where we are. It’s a really strong team but we have confidence to do our best and play a fantastic game. The moment is good for us and it’s good to have this kind of test. We have to be happy to complete against the top teams. We need to have the confidence to compete and to be focussed on our football. We don’t have to look too much to the opponents’ team because they are really strong. It’s better to be focussed on our football. The work Duncan did increased the spirit of the team and so I’ve found players with character and good attitude. I haven’t changed a lot since because we haven’t had time [with the Christmas fixtures]. The players have shown confidence in the games and I hope this can continue in the next games which are really difficult. The players are focussed, concentrated. We’ve changed little bits defensively and offensively. The players have adapted really well and we have to look forward.”

Asked about the injury status in the squad, he confirmed that whilst Alex Iwobi is still sidelined along with long term absentees Andre Gomes and J-P Gbamin, Morgan Schneiderlin has recovered from a calf strain and was available for selection.

Interestingly, he also advised that any discussions with the clubs hierarchy regarding activity in the January transfer window won’t take place until after the FA Cup tie on Sunday.

However, there was a late, late change to the line-up as Bernard injured a knee in the pre-game warm-up and was replaced by Tom Davies, meaning a late addition of Anthony Gordon to the bench.

Our referee at the Etihad was Andre Marriner.

A quiet opening five minutes to the game with Everton looking to play out from the back with City quickly settling into their passing game. Mendy got wide on the City left to cross towards Jesus, but it was too strong and Davies was able to clear. The Blues then went forward with Coleman getting onto a chipped ball from Sigurdsson to control and shoot, Bravo palming the ball away for the first corner. Coleman was then called upon to play his normal defensive role in shepherding de Bruyne and getting the ball clear. Gundogan with a ball forward for Jesus saw Pickford race off his line to clear at the second attempt.

City put together a flowing right flank move on 12 minutes with Mahrez feeding Cancelo for a fine cross into the six yard area for Foden to finish at the back post, but VAR ruled the goal out for offside against Mahrez.

VAR reared its ugly head again moments later as City were ruled offside, the referee blew to stop play, but the remote official deemed it necessary to review a possible foul by Lucas Digne after the whistle.

A poor clearance from Pickford was quickly played forward by Gundogan, De Bruyne and Foden for Jesus on the edge of the penalty areas to control, but blaze his shot high and wide of the target.

Everton were conceding too much possession and playing too conservatively for the liking of Carlo Ancelotti and he was prowling the touchline imploring his side to move the ball forward more quickly and positively.

Mendy again found space on the left and fed Mahrez who Mina wouldn’t allow to cut inside and his shot from a wider position was turned away by Pickford at the expense of a corner. City were looking to turn the screw and Mina saw the first yellow card for a clear foul on De Bruyne on the half-hour mark, halting another City raid before it really got going.

City were enjoying lots of possession but Everton were holding their defensive shape, and frustrating the home side with a measured performance, Foden to Mendy for a cross to Jesus that saw another shot way off target indicative of the champions struggle to break down the Everton shape.

Into the last five minutes of the first half and Cancelo with a great ball found Jesus on the right and he turned and fed the ball to Mahrez but he pulled his shot wide across goal with out troubling Pickford. A super cross from the left by Mendy found Mahrez, but there was a suspicion of hand ball by the City player as Pickford gathered his weak effort. Everton won a late corner and Sigurdsson found the head of Mian, but he couldn’t direct his header down and on target. City had had by far the better of the first half, but Everton would have been satisfied with their having denied the home side at the break.

Neither manager made any changes for the second half that saw Everton attacking the end where the travelling Blues were encamped in another sold-out visiting fans area, hoping the side would throw off the cautious approach of the first session and be a bit more aggressive in trying to get forward.

Just over five minutes in, City took the lead as Gundogan found Jesus and he managed to get beyond Holgate to curl a shot that Pickford got a hand to but couldn’t prevent it reaching the back of the net.

Everton responded with DCL fording the City defence into conceding a corner that Sigurdsson swung in for DCL to head down and that was deflected out for another corner that saw Everton caught offside.

The Blues were in need of some inspiration, but it was City who found it, De Bruyne to Foden, back to Gundogan who found Jesus for a precise low finish to Pickfords’ right for 2-0 on 58 minutes.

Carlo Ancelotti reacted by withdrawing Seamus Coleman to bring Theo Walcott on to try and give the side some more attacking capability.

Moise Kean was the Blues second change on 66 minutes, replacing Sigurdsson, who again failed to impose himself on a game and remains a frustrating luxury far too often.

Fabian Delph picked up a yellow card for a foul on Cancelo and De Bruyne chipped the ball over the wall for Mahrez, but his effort on the turn didn’t trouble Pickford. Everton got forward in numbers and a poor clearance by Bravo saw them pull a goal back, Moise Kean doing well to work the ball to Walcott on the right and his shot/cross saw Richarlison arrive unmarked at the back post to score on 71 minutes.

Everton were growing in belief and after a steady build-up on the left, the ball found its way to Sidibe who lifted it forward for Moise Kean to try a speculative bicycle kick shot that went wide. Mason Holgate with a terrific block denied Mahrez only for City to quickly win back possession and Mahrez found Jesus who smacked a shot past Pickford but against the post. Tom Davies was booked for a challenge on Foden, ahead of some one touch passing from City present Jesus with another shooting chance that Pickford saved well.

City made a change of 82 minutes, the experienced David Silva replacing Foden. A long ball forward found DCL and he worked the ball back to Walcott to find Davies for a cross that went out for a corner that City defended.

A long ball from Sidibe found DCL and his initial contact took the ball towards the corner where he went in hard on Fernandinho, winning the ball but picking up a booking for the perceived ferocity of the tackle.

Four added minutes were signalled and two minutes in, City withdrew Mahrez for Sterling. An Everton free kick led to Digne winning a late corner which Walcott took to the near post where De Bruyne cleared, and City were able to run down the final seconds.