Having taken a first half lead with a superb move and finish from Richarlison, Everton were desperately unlucky not to take a point as Vardy equalised and Iheanacho struck a winner deep into added-on time.

The opening game of a gruelling December schedule saw the Blues make their way to the East Midlands to face high-flying Leicester City, one place above the bottom three and badly in need of a much better performance and result than last week against Norwich.

Let’s be under no illusion, in the eyes of most football watchers Everton travelled as definite underdogs to face the side managed by Brendan Rodgers who entered the game looking to win but knowing a draw would lift them above Manchester City into second place.

The Foxes went into the game looking for their sixth straight top-flight victory and a fifth consecutive clean sheet having scored 17 since they last conceded, and unbeaten at home this season. Rodgers was able to include Jonny Evans in his selection thinking but was without midfielder Matt James.

When Arsenal dispensed with Unai Emery on Friday morning, the Leicester manager was quick to deflect suggestions that he might get a call from the Emirates. In his pre-match press conference Rodgers commented, “It’s natural that there are links. If you are doing okay, people want to take you away from something you enjoy. If you’re not, it doesn’t matter, there’s always a number of names. We’re at the beginning of something here. My relationship with the people here and the players is very strong. We think we are starting something exciting.”

A week on from the awful showing against Norwich and a week that has seen no shortage of speculation over the future of Marco Silva as Everton manager, the Portuguese was in charge of things having been supported by Marcel Brands on Friday morning. Despite facing a barrage of questions from the media in his pre-match press gathering about his position, Silva didn’t appear to be a man under the pressure than many fans expected him to be.

Asked only one question about the game, Silva repeated and emphasised that he will continue to concentrate on matters directly under his control when he summarised, “I don’t lose time thinking about that. I don’t waste my focus thinking about this situation. My focus is always on my players and what I can control and the next match. I didn’t read [anything]. Of course I had more or less the feedback but not everything. I try to put all my energy into things that can help me and my players to perform and to improve what we should improve.”

And turning to team matters for the trip to Leicester, he confirmed that there would be four likely absentees as Seamus Coleman was definitely out while Morgan Schneiderlin, Fabian Delph and Theo Walcott would all highly likely to miss the game.

There were two positive aspects he was able to report upon, that Brazilian Bernard had recovered from his knee injury, had returned to full training and could feature at the King Power stadium, and that contract extension talks with Richarlison were proceeding well. He commented, “It [agreeing a new contract for Richarlison] was key for me. It was something we have been working on for some weeks. From the conversations I have had with Richarlison, I was clear how he is an important player for us. Our Board said the same thing to him. We are doing this because we believe he can keep improving as a player and he can keep helping our team to win matches.”

With Blues fans wondering how he would set the team up to combat the pace of Leicester and what formation he might employ to repeat last seasons’ win, Silva opted for a 5-4-1 formation and starting eleven of: Pickford, Sidibe, Holgate, Mina, Keane, Digne, Davies, Sigurdsson (c), Iwobi, Richarlison and Calvert-Lewin.

Our referee on a cold Sunday afternoon was Graham Scott.

Leicester with an early free kick that was comfortably cleared and it led to a quick break with Richarlison setting DCL free down the left channel only for his cross to the back post to be too strong. The first real attempt by either side came in the seventh minute when Digne and Sigurdsson worked the ball to the right for Sidibe to shoot, but his rising effort didn’t trouble Schmeichel.

The home sides first effort came when Pereira found former Newcastle striker Perez in the Everton penalty area but his shot on the turn sailed across the face of goal and wide as the opening quarter hour passed without too many troubles for the salmon pink shirted Toffees.

Tom Davies got a talking too from referee Scott for a stiff challenge on Pereira before Perez went down like a dying swan with a silly appeal for a penalty after falling over the leg of Keane.

Everton opened the scoring in the 23rd minute with a terrific move, Richarlison finding DCL, he fed Iwobi who played Sidibe into space on the right for the cross that saw Richarlison in the perfect place to comprehensively beat Schmeichel with a precise header.

Leicester tried to hit back quickly with Barnes finding Perez in the area and he went down again under a well-timed challenge from Sidibe.

Everton were competing and the referee decided a bit too strongly, awarding Leicester two quick free kicks before Mina got a telling block onto a volleyed shot from Maddison after a headed clearance from Keane on a Chilwell cross fell nicely for him.

Ndidi spread the ball wide for Chilwell to cross and Vardy made a complete hash of a bicycle kick shot that sailed miles over the bar, prompting jeers from the travelling Evertonians.

A mistake followed by a mistimed challenge from Holgate on Chilwell on 33 minutes saw the home side awarded a penalty although the contact appeared extremely debatable. VAR took its time before finally deciding there had indeed not been any contact and the original decision was rightly overturned. Chilwell mysteriously wasn’t booked for simulation.

Spurred into action, Leicester upped their tempo and Pickford was called on to punch a left wing cross clear ahead of Mina clearing again from Perez as the home side got bodies into the Everton penalty area.

Everton were defending well and with the midfield closing Leicester down quickly, the game was evenly poised in the run-up to the half time break. Into added-on time and a break down the right saw DCL turn away from Soyuncu who managed to recover enough to block the shot.

Gylfi Sigurdsson picked the games first yellow card and the resulting free kick from Maddison saw Leicester earn their first corner that came to nothing and the salmon shirted Toffees took their hard-earned lead to the dressing room.

No changes by either manager during the interval as Leicester kicked off looking to get forward quickly through Maddison and Vardy, the ball running safely out of play. A mistake at other end from Soyuncu nearly let Everton in but they were able to recover and clear a cross from Davies with nobody at the back post. Barnes then got forward quickly to win a second Leicester corner that was easily cleared.

A great ball from Iwobi got Richarlison away on the left to beat Soyuncu and find Sigurdsson whose shot was deflected for a corner, Schmeichel happy to hold onto a header from Keane. Everton won another quick corner that saw Richarlison unable to keep his header down.

Pereira picked off a pass from Davies to break into space and when Pickford parried the low shot, the ball was swept for away for a well-defended corner. A nice move then from Everton saw Richarlison spread the ball wide right for Sidibe and DCL just couldn’t get on the end of his searching cross to the back post area.

Everton were harassing Leicester with Sidibe heavily involved and leading to him winning the third corner of the second half. Mina and Ndidi got involved in some push and shove with the Columbian going down, both players getting a few words from referee Scott.

Just past the hour mark, Leicester made their first change replacing Perez with Iheanacho, ahead of Soyuncu making a desperate block to deny Holgate at the back post. Everton were now looking for a second goal and two crosses into the Leicester penalty area both failed to find an attackers head. When the home side got forward again, Ndidi and Iheanacho swapped passes before the latter saw his weak shot go straight at Pickford.

The game was opening up and Iwobi again found Sidibe in space only for his shot to be deflected into the arms of Schmeichel. But the home side drew level in the 68th minute as Ndidi broke free in midfield to burst forward, find Iheanacho and his cross shot was met at the back post by Vardy for 1-1.

Into the final twenty minutes and Everton needed to stay calm and maintain the shape that had worked so well until that decisive break by Ndidi. Another quick break started by Barnes saw him feed Vardy and then race into the area to get on the end of the ball from Vardy and bring a vital save from Jordan Pickford.

Ndidi again got the ball forward quickly to Vardy and good tracking back by Sigurdsson saw him cut out the ball intended for Iheanacho. Leicester now looking the more likely and Vardy spurned a glorious chance heading over when he really should have tested Pickford.

An incisive move by Leicester saw Holgate stand his ground to cut out a cross from Iheanacho as the home side poured forward.

Marco Silva made a double change on 78 minutes, Alex Iwobi and DCL replaced by Morgan Schneiderlin and Moise Kean respectively. Davies went down after finding Richarlison whose instant ball for Kean saw the young Italian curl a first time shot that hit the side netting.

More good defending from Holgate again foiled a Leicester attack ahead of Albrighton becoming the second change for Leicester, coming on for Barnes. Albrightons’ first involvement was to find Ndidi who gave the ball to Tielemans to shoot wide from twenty yards.

Everton were still looking for a winner themselves and Kean got a second chance when he was found by Richarlison only for his shot to go straight at Schmeichel. Leicester went back down the other end to win a corner with under five minutes of normal time to play, Pickford easily gathering a weak Ndidi header.

Into three minutes of added-on time and Sidibe went down following a tackle with Iheanacho that looked fairly innocent, but the Frenchman looked distinctly uncomfortable whilst receiving treatment.

And Everton were denied a point deep into added-on time as Leicester broke quickly again with Iheanacho firing past Pickford with the linesman intervening with an offside flag but, VAR ruling in the home sides favour.

This was very rough justice for Everton, the players, fans and their beleaguered manager as they’d played so much better than last week and didn’t deserve this heartbreak ending. 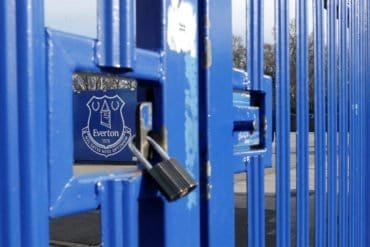