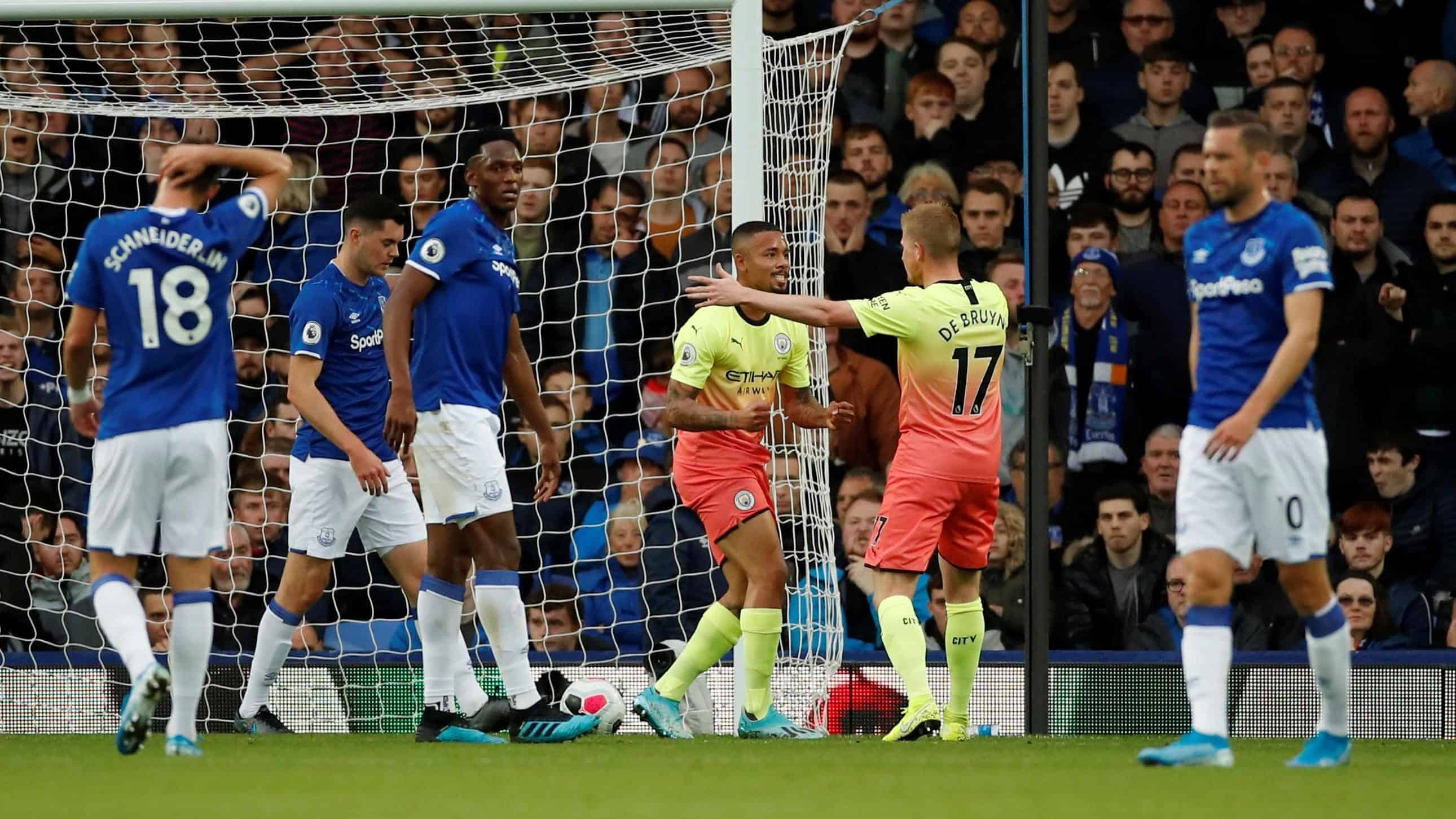 By Andy Costigan
In Everton NewsMatch Reports
4 months ago

City too good for battling Blues.

Champions do what champions do and Manchester City did that as they were pushed hard by Everton for long periods before securing the points.

With progression in the Carabao Cup secured and a home tie against Watford to come, Everton returned to Premier League action and a need to get back to winning ways and back towards the right end of the table.

Defending champions Manchester City arrived at Goodison knowing a victory over Everton was an absolute necessity to keep them in touch of them across the park.

Earlier this week, Michael Gove likened Boris Johnson to Pep Guardiola as being a serial winner… I’ve a feeling Evertonians would prefer Pep to be likened to Johnson as a serial loser, at least for today.

Marco Silva is still the subject of much conjecture amongst Everton supporters and he acknowledged his sides recent poor form in his pre-match press conference. “Of course we’re not happy. I’m the first one to not be happy when I look at the table. But, it’s too early to panic. If we had had a good game last home game and won those points, you are talking about a completely different position.”

He continued defiantly, “We know what we are doing, we know we should improve and if we improve those situations the results will come and we’ll see a different position for sure.”

Marco Silva was still unable to call upon Andre Gomes or Jean-Philippe Gbamin, and with a choice to make at right back and in the midfield with Alex Iwobi having filled in well for Gylfi Sigurdsson against Sheffield Wednesday.

In the opposite dugout was the all conquering Pep Guardiola with a defence missing Aymeric Laporte and John Stones, but with an array of offensive talent to call upon including expected returns to the starting line up for record goalscorer Sergio Aguero and Kevin de Bruyne.

Guardiola was trounced 4-0 on his first visit to Goodison and he recognised the Grand Old Lady is a special venue in his prematch press briefing saying, “Goodison Park is always a challenge, one of the toughest games and we know it. We have already prepared and the players know how difficult it is.”

He added on the summer transfer business of the Toffees, “They remain an incredible team, they invested well last season and again this summer.”

On a cool autumnal evening, our referee was Michael Oliver.

City were straight into their passing game which saw Pickford parry a Mahrez shot out to Sterling and his cross hit Walcott full in the face and he appeared to be knocked out. A five-minute delay ended before he was stretchered off to go to hospital and Alex Iwobi was his replacement.

City should have opened the scoring on eleven minutes as Gundogan got on the end of a cross from Mahrez and inexplicably hit the cross bar form three yards.

Sterling got away from Coleman to cross low into the six yard area where Mina cleared hurriedly.

Everton put a nice move together on 23 minutes and Delph, Iwobi and Digne worked the ball to Sigurdsson only for his shot to be blocked and cleared for City to race away and open the scoring… Walker finding de Bruyne to cross into the area where Jesus headed home from close range.

Everton responded with Schneidelin clipping a ball to Sigurdsson to send Richarlison in on the right with Ederson beating away his cross shot and again City broke quickly through Sterling and de Bruyne with Pickford saving the shot from Mahrez.

City were dominating and another move saw de Bruyne cross long for Sterling who laid the ball into the path of Mahrez who shot weakly straight at Pickford.

Everton hit back on 34 minutes, pressuring City back into their own area through Iwobi with the ball breaking for Coleman who cheekily chipped Ederson for Calvert-Lewin to dive headlong to get the finishing tough from about six inches.

City were momentarily rattled and Rodri was booked for a could on DCL as Everton looked to out another promising move together. Iwobi lifted a ball over the top for Sigurdsson to get on the end of but he couldn’t find a finishing touch.

Heading towards the break, Jesus blazed high and wide after another flowing City move that saw Walker, Mahrez and Gundogan all involved, and in added on time, Walker and Rodri combined to set up Gundogan who again shot tamely straight into the arms of Jordan Pickford.

No changes by either manager during the break and City were again quickly into their stride with Sterling finding Gundogan with Michael Keane making a timely block. City at speed spread the ball left to right, Sterling to Mahrez to de Bruyne and his shot hit the side netting.

Otamendi was booked on 49 minutes for bringing down DCL Nad the free kick from Sigurdsson saw a Richarlison header off target. A fine cross field ball from Schneiderlin found Richarlison who was clattered by Zinchenko, the free kick swung in by Digne for Ederson to react quickly to push a header from Mina over the bar.

It was now a much more even game, City enjoying slightly better possession but Everton battling hard. Schneiderlin was next in the book for bringing down de Bruyne.

An unlucky bounce off the heel of Iwobi saw Mahrez feed Sterling all on his own in the Everton area and he missed the target when it looked easier to score.

Sergio Aguero replaced Jesus on 65 minutes with City looking to stretch Everton at every opportunity looking for a way through.

A foul by Mina on de Bruyne gave City a free kick and Mahrez bent a low shot around the wall and inside far post for 1-2 on 70 minutes.

Marco Sulva sent on Moise Kean for Alex Iwobi three minutes later ahead of a good move that saw Ederson deflect an effort from DCL away for a corner.

Bernardo Silva for de Bruyne and Tom Davies for Morgan Schneiderlin were the next changes on 79 and 80 minutes respectively before City sealed the points with their third goal.

Mahrez and Aguero finding space on the City right to get the ball into Sterling who shot was partially saved by Pickford, hit the bar but was deemed to have crossed the line.

City may have claimed the points in their need to close the gap on them across the park, but Everton had made them work hard for the win.