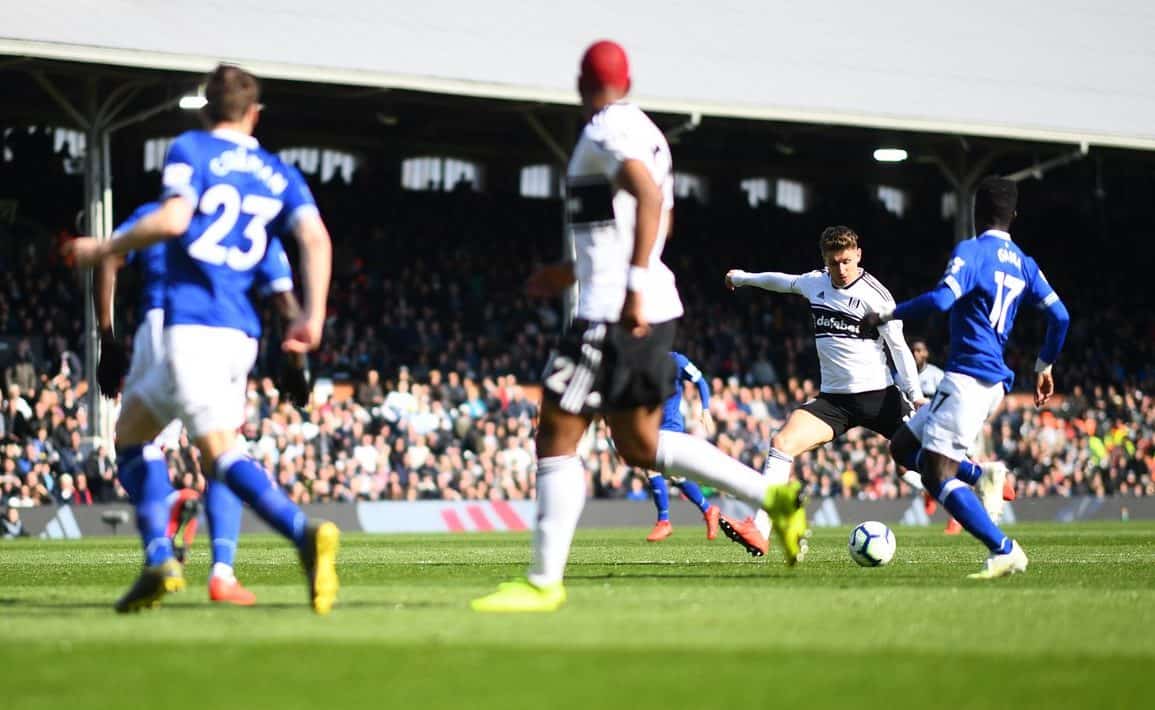 All the good work of the previous three games went awry on Saturday as a rather dreadful performance from Everton saw them beaten for the first time in four games by already relegated Fulham.

But to be fair to the hosts, they were deserving of the points as they played without fear and free from the pressure of trying to save their top-flight status whereas Everton never quite got to grips with the task ahead of them with too many players well below their best.

On the back of three straight and impressive wins over opposition from the nations capital, our mighty Blues again tripped the light fantastic down the M6 and M40 to west London and that throwback to a bygone age, Craven Cottage.

One of if not the friendliest grounds in the Premier League – well at least for a few more weeks – Fulham is the most relaxed of venues for visiting fans to experience and enjoy. Despite the lack of car parking in the immediate vicinity, perched on the banks of the Thames, the stadium is blessed with civilised stewarding and a welcoming atmosphere.

With Scott Parker now the interim manager of Fulham, he was looking to avoid the Cottagers recording a tenth successive loss as they head for their return to the second tier of English football next season. And Parker was only too aware that in Everton, his task was made that much harder by the Blues being positively resurgent since the last two international breaks.

In his pre-match briefing Parker noted, “I’m not focusing on me. I just want to improve things. The most important thing for me is sending out a team where people can see organisation and belief, and hopefully that gets us some results. I’m in constant discussion with the owner about how we can improve things. I’m looking at the long-term future of the club, whether I’m the manager or not.”

Parker was hoping German international striker Andre Schurrle and Timothy Fosu-Mensah would be fit to return as he was almost certainly unable to call upon Alfie Mawson and Floyd Ayite. He was eventually able to name his line-up: Rico, Fosu-Mensah, Ream, Le Marchand, Bryan, Cairney, Chambers, Anguissa, Sessegnon, Mitrovic and Babel.

For Marco Silva and Everton, there was genuine stimulus to carry on their recent win of winning form. A fourth win on the bounce would see that mark reached for the first time since 2016, a clean sheet four games running would see that mark reached in ten years, and victory would keep them in the hunt for Europa League qualification for next season.

Silva pointedly remarked on this in his Thursday press conference saying, “One of the things, looking to the future of our club, is we should be a club participating all the years in European football. Playing in European competitions is just a target; we know it’s not really easy as many clubs want the same, but it’s something that has to be in our mind and has to be a goal for us. For us to achieve that we have to keep doing the right things, keep growing as a squad, prepare well to achieve that.”

With Michael Keane recovered from the virus that saw him sit out the win over Arsenal, Silva had to decide whether to bring him straight back into the starting eleven at the expense of game-winner Phil Jagielka. With just that one selection issue to resolve and with yet another fully sold-out away support keen to see the Blues play with the same level of intensity as last week, our Portuguese maestro opted for the same starting eleven that began against Arsenal: Pickford, Coleman, Jagielka (c), Zouma, Digne, Gana Gueye, Gomes, Bernard, Sigurdsson, Richarlison and Calvert-Lewin.

On a bright, but cool afternoon on the banks of the Thames, our referee was Lee Probert.

Jordan Pickford with an inexplicable clearance that cannoned off Jagielka saw the Blues survive a nervy moment in the opening exchanges, ahead of the first of two early shots from Mitrovic, the first flying miles high and wide, the second easily gathered by the Everton goalie.

Fulham had started brightly, maybe with relegation now confirmed, playing with no real pressure on themselves, but the best early chance came the way of the Blues with Coleman putting Gomes in for a cross whipped across the six yard area and shovelled out for a corner that came to nothing.

Mitrovic played in down the left flank won the battle with Jagielka to send in his third effort, Pickford again making a comfortable save. Everton were still settling into the game and DCL put Le Marchand under pressure with home fans holding their breath momentarily before he completed his clearance.

Richarlison with a neat turn and burst of speed tried to get away from Bryan and won a free kick for the inevitable foul, but the set piece was poor from the Blues. Richarlison with another good dribble spread the ball wide left for Digne and his instant cross fell for Gomes to shoot, but his effort was blocked. Bernard was next to stretch his legs to get away from Fosu-Mensah with Rico gathing his shot and we reached the 20-minute mark without a goal.

Fulham countered to win a corner off Jagielka and Babel’s set piece found the head of Mitrovic who forced Pickford into a good save tipping the ball over for another corner that again saw Mitrovic get the better of Jagielka in the air to win a third corner off the Everton skipper.

A long ball from Le Marchand, following a free kick for a Zouma foul on Mitrovic, found Babel in the Everton penalty area and Pickford reacted quickly to gather the ball before the former RS player could turn for a shot.

Gana Gueye went down winded after a Fulham clearance caught him in the nether regions allowing time for Marco Silva to animatedly pass on some instructions to Andre Gomes. A poor ball from Coleman was picked off by Cairney but he wasted the cross sending it straight into the grateful hands of Pickford.

Everton were to some degree riding their luck at the back as another cross from the left saw Chambers get his head to it, but he couldn’t direct the ball on target, it cannoning to safety off Zouma who in all honestly knew precious little about it.

Babel with some neat footwork released Cairney down the left for another cross that eventually came out to Fosu-Mensah on the right who jinked away from Bernard and his cross was put behind for a fourth Fulham corner.

The home side were now having much the better of the possession and a dangerous ball into the box from Babel for Bryan was just too strong. Gana Gueye was penalised for a foul on Anguissa and slightly fortunate not to see yellow. Mitrovic was very much the focal point of all the Fulham attacks and another ball pumped forward by Fosu-Mensah saw Mitrovic win it, but his early shot was again off target.

Inside the final minutes of the first half, Everton got lucky again as another sweeping Fulham attack ended with Chambers finding Mitrovic who crashed in a shot that beat Pickford to ricochet off the crossbar to keep the score level.

Richarlison was booked for a foul on Cairney, taking the ankle from behind as the home side looked to break away. A late raid by the Blues in added-on time saw Coleman cross low into the box with DCL just unable to get on the end for what would have been a certain goal.

A headmasters report on the Blues first half would certainly have read, “Must do better” and Marco Silva will surely not have been overly happy with the showing of his team, that noticeably lacked intensity

An awful start to the second half from the Blues saw them fall behind inside a minute of the restart to a neat side-footed from Cairney on a feed from Babel.

Ream was booked for a foul on Richarlison and the free kick from Sigurdsson found the head of DCL, but he couldn’t direct his effort on target.

Everton had the ball in Fulhams’ net from Sigurdsson on 52 minutes, but the whistle had already gone for a foul on the goalie Rico by DCL trying to get on the end of a cross from Digne.

Sessegnon won a free kick wide on the Fulham right, drawing the foul from Digne, Fulham winning a corner after Richarlison deflected an off-target shot behind.

Fulham were next to have a ‘goal’ chalked off after a lofted ball into the Everton area caused a bit of panic and Mitrovic netted but was penalised for a pull back on Zouma as he looked to clear.

Gana Gueye getting forward looked to open up his body for a shot that sailed high and wide of the target as Everton continued to stutter in their attempts to get back into the game.

A nice turn on the edge of the Fulham area saw Sigurdsson neatly find DCL and his instant flick of the ball with the outside of his right foot saw him beat the advancing Rico but also the outside edge of the far post.

Fosu-Mensah went down on the hour mark following a tussle with Lucas Digne and needed some treatment before continuing.

After DCL had missed his kick in the act of shooting, Everton got the ball wide to Coleman and he lofted a cross right under the Fulham crossbar that Rico was somewhat fortunate to punch clear. The Blues had upped their work rate, bossing the possession but still weren’t firing on all cylinders in their search for an equaliser.

Fosu-Mensah went down again off the ball and limped off on 65 minutes to be replaced by Christie, and his first involvement saw Bernard rob him of the ball to win a corner that Digne swung in and Rico punch the header from Jagielka away for a corner from the right.

Relegated Fulham broke away on 68 minutes and wouldn’t you just know it, former RS Ryan Babel got clear to neatly dink the ball over the advancing Pickford for the most unlikely of scorelines.

Marco Silva made his first change on 73 minutes withdrawing the disappointing Sigurdsson to give Ademola Lookman a chance to impress.

Nothing was working out for the Blues as a fine through ball from Gomes for DCL was intercepted and cleared by Ream, and on the next raid, Bernard found Gomes in space for a shot, but it sailed high over the goal without troubling Rico.

Both sides made changes on 83 minutes, Seri replacing Babel for Fulham with Theo Walcott and Cenk Tosun replacing Richarlison and Bernard respectively.

Eight added minutes were signalled as a result of a number of stoppages for players needing attention and substitutions seemingly taking an eternity to complete, but Everton were unable to take advantage of the extra time and they fall rather limply to defeat and gave Fulham just their third clean sheet of the season.

From a free kick, Gomes wrestled Mitrovic to the ground in the Fulham area and disappointingly moments later appeared to deliberately tread on the same player before Gana Gueye went in heavily on Bryan as frustration crept into the Blues game.

Fulham will be playing Championship football next season, but if they can keep Mitrovic they may have a chance of a quick return.