Second half markers from Theo Walcott and Cenk Tosun saw Everton finally convert their overall dominance of Brighton into goals, and they had the luxury of seeing a late Rooney penalty well saved.

After miserable back to back losses to Watford and Burnley, Everton returned to Goodison desperate for a performance and result against a Brighton side also looking for three more valuable points to retain their Premier League status for another season.

Brighton travelled north in good form being unbeaten in their last seven games and their quietly spoken manager Chris Hughton continues to do a stalwart job for one of the pre-season favourites for relegation. The former Spurs fullback, looking to try and secure a first ever Brighton win at Goodison named his line-up: Ryan, Schelotto, Duffy, Dunk (c), Bong, Knockaert, Kayal, Proepper, Izquierdo, Gross and Murray.

Toting watches, whistles and cans of shaving cream for free kicks not his palate, Roger East was our referee.

Good early pressing by Tosun and Sigurdsson won an early corner that was cleared and lofted back towards Tosun by Baines with Coleman bursting into the box to fire a shot across the face of goal.

The Blues second corner saw Jagielka get a clear header that went straight at Ryan in the visitors goal, but it had been a bright start by the home side.

Tosun fed Bolasie to curl a 25-yardarm high and wide on 12 minutes before Keane found Coleman with a 40-yard pass and Dunk was forced to clear the cross hurriedly.

Baines was next with a telling pass that found Bolasie, but he couldn’t get the ball under control and the chance slipped away. Baines showed vestiges of his past with a terrific cross on 19 minutes that was just too strong for Tosun and Walcott.

Another Sigurdsson corner beat Ryan in the air only for problems but Bolasie was only able to poke narrowly wide at the back post.

It was the 24th minute before Brighton made an opening that saw Murray test the gloves of Pickford from 20 yards.

Everton were soon back on the offensive and yet another corner was cleared and sent back to Sigurdsson by Rooney for a driven cross that Ryan palmed out with Bolasie unable to keep his quick volley down and on target.

Passing the half hour mark, it had been almost total one way traffic with the Blues well on top but unable to find a finishing touch.

Shane Duffy on his return to Goodison made an important block on a Sigurdsson shot as the Blues strove for a half time lead that didn’t materialise, but not for a lack of effort.

No changes by either side at the interval as Everton defended the Gwladys Street End for the second half.

A good early break from defence saw Davies release Walcott on the right flank only to stumble on the return pass with less than half hearted appeals for a penalty.

Schelotto was booked for a blatant block on Bolasie in the 55th minute and from the resulting free kick, Rooney saw a powerful shot deflected for a corner.

Finally, and not before time on 59 minutes, Everton got the lead their overall dominance deserved. Tom Davies won the ball in midfield and found Yannick Bolasie on the left and he made ground before putting an inch perfect cross to the back post for Theo Walcott to convert. Upon review, the goal was adjudged to be a clanger of an o g by Bong, but for GOT purposes, let’s leave it with Theo eh?

And it could have been two moments later when Bolasie swung another cross to the back post for Walcott to cut back, but Brighton were able to scramble the ball clear.

On 68 minutes, Brighton made their first change, Locadia replacing Kayal.

Theo Walcott limped off on 72 minutes to be replaced by Dominic Calvert-Lewin.

With quarter of an hour to go, Brighton started to throw men forward and Everton would have welcomed the cushion of a second marker and right on cue, Baines got forward and crossed for Cenk Tosun to score off the crossbar from twelve yards.

Brighton were reduced to ten men on 79 minutes as Knockaert got a straight red card for going over the ball on Baines.

And Everton responded in kind giving Davy Klaassen a short cameo appearance on 83 minutes, replacing Tom Davies. The roar of greeting must have been music to the Dutchman’s ears.

DCL gaining the box on 86 minutes went down under a challenge from Shane Duffy and from the resulting penalty, Matt Ryan in the visitors goal made a superb, full length diving save to deny Wayne Rooney.

In added on time, Pickford showed his alertness in turning away a full-blooded drive from Gross to maintain his clean sheet.

Personal Thoughts…
It’s very pleasing, after the events of recent games, to report that nobody in a blue shirt let themselves, the fans or the club down today.

Michael Keane looked a totally different player to the one who struggled at Burnley while Yannick Bolasie was a mesmerising thorn in the side of Brighton. Nobody is ever quite sure what he’ll produce and his pace, twisting and turning gave Brighton no end of problems.

All in all, a much improved showing from the Blues and everyone will welcome the three very valuable points. 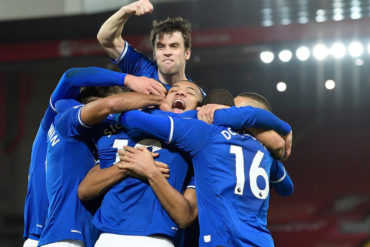