Kevin Mirallas has endured his lowest point of his Everton career over the last 12 months, but under new management, he will look to be the man to lead the Blues to glory again.

A reliable outlet under Moyes turned into an electric livewire under Martinez – in the Spaniard’s initial season, that is – as he lit up Goodison and stole the show on many occasions, with his undeniable quality and flair.

However, it all went a bit awry for the Belgian-born winger, as a falling out with the manager led to a season largely in the stands as he looked to be on his way out.

His Everton career wasn’t finished there, though.

From Liége to Lille
Mirallas was a player who had trouble finding his way in his early years, as he bounced around from Belgium to France between 2004 and 2010, never holding down a proper first-team place. He made just over 76 appearances in 5 years for Lille, and was shipped off to fellow Ligue 1 outfit Saint-Étienne in 2008, where he played more regularly and began to make himself known, scoring crucial goals including one against high-flying Lyonnais in the local derby game.

Again though, this form would fizzle out over the course of 3 years with ‘Les Verts’ and he found himself once again in the limbo of the stands and the pitch, never being entirely comfortable on either end.

Finding his Magic Feet
In the summer of 2010, in the midst of Mirallas’ struggles, he took the bold trip over to Piraeus to play for Olympiacos on an initial one-year loan.

He made his debut in comfortable circumstances as the Greek side strolled past Besa Kavaje in the Europa League qualifying, and then went on to score his first flurry of goals as they beat second-division Olympiacos Volou.

None of this meant anything, of course, as the regular season had yet to kick-off. When it did, his first goal came in the fiery atmosphere of the ‘Derby of Eternal Enemies’ between Olympiacos and Panathinaikos. Despite losing the tie, Olympiacos elected to make Mirallas’ transfer permanent on a four year deal.

He would not see out the entirety of this deal, however, as in the summer of 2012, he signed for Everton for £6m in what would be David Moyes’ final summer of transfers before ending his time at Goodison and moving down the road to fill the colossal boots of Sir Alex Ferguson. A job which would be miles over his head.

So, did Moyes leave the right legacy in this flair-filled, journeyman winger?

A change in Mentality … for Moyes.
David Moyes was never known for exciting attacking play – we know that best- and many of us would not have been off our seats at Goodison because of tricks or skill. The arrival of Kevin Mirallas changed the mood in the Gwladys entirely, as he brought a spectacular brand of what was foreign to the masses. 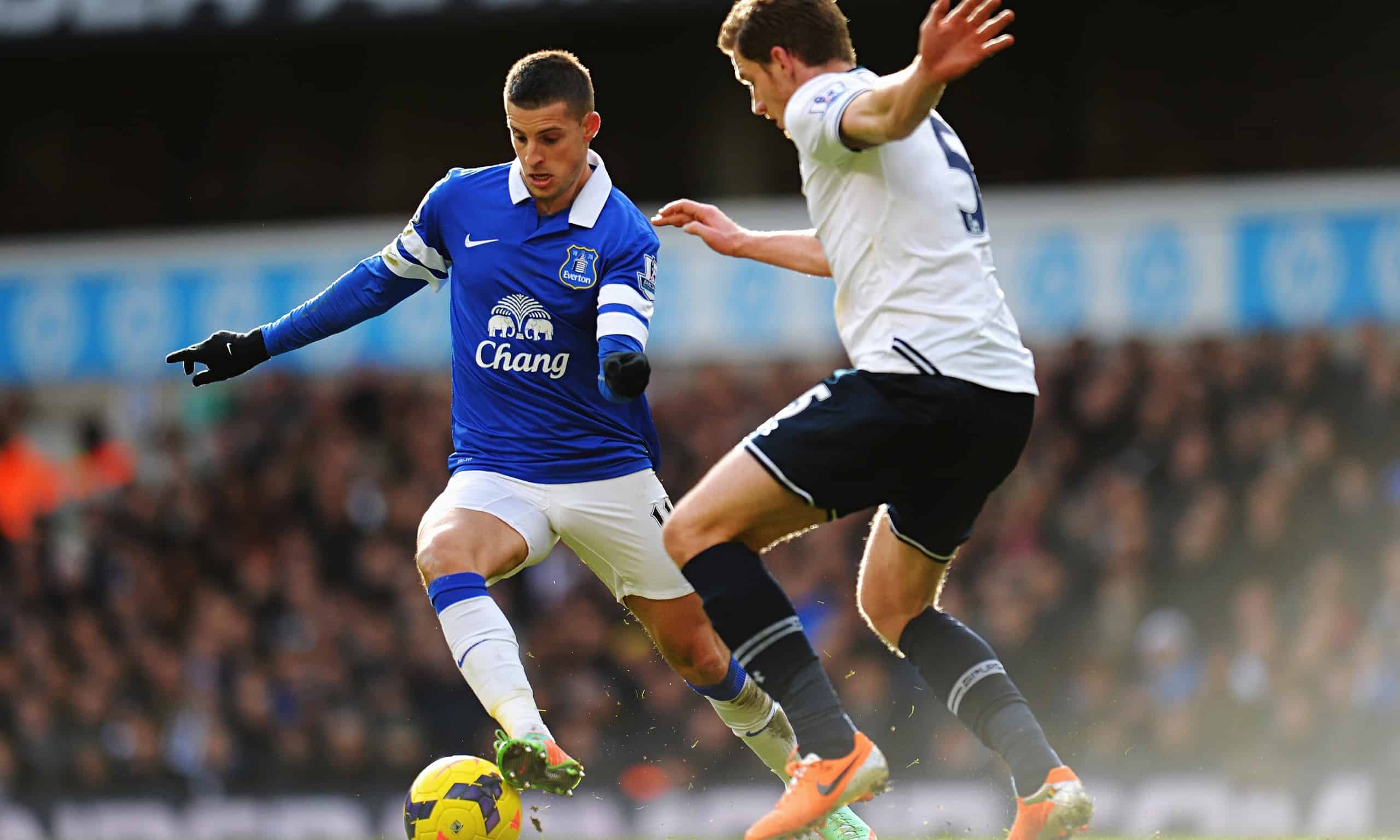 It was like the invasion of Rock music. ”Turn it off” they said, as many of the traditions of the older generations were shattered by an unwelcomed expression.
Kevin Mirallas was the Rock music to Everton’s tired football.

The magic-filled boots of the superstar dazzled all of us in his initial season, coming to a climax with a heroic 1 vs 11 effort against Stoke, in which he received the ball in his own box and it was in Begovic’s goal before any other Stoke man could catch a glimpse at Mirallas.

He was the man who provided the send-off David Moyes deserved at Everton, as he bagged a brace in the Scot’s final match in the home dugout at Goodison. How fitting that the man who completed Moyes’ Everton would finish his reign as boss.

He was a man who thrived off of the adoration and attention. This wouldn’t change, even if everything else around him did…

A perfect fit for a partner.
A summer of change at Finch Farm saw Roberto Martinez come in as the new Everton boss, making him the first manager outside of the British Isles to ever be appointed manager of Everton.
He captained the ship through a period of upheaval which saw David Moyes’ cosy stability leave Everton. The Catalan’s crass Football saw Everton get in the faces of the opposition and hound them for 90 minutes. Nobody more so than Mirallas.

From being the sole outlet for Everton in the previous year, Mirallas saw himself become part of an electric Everton attack, spearheaded by his Belgian counterpart Romelu Lukaku in a season where he would help the Blues to a record points total in the Premier League era.

A betrayal of faith and a loss of direction.
Goodison’s own Hollywood star seemed to be taking a path less travelled for his kind. Normally, a player of his calibre would use a rustic club like Everton as a stepping stone to the A-list clubs of the world. Mirallas, however, committed to Everton as he found a home on the banks of the Mersey. It was too good to be true. A young, hungry manager and an overflow of world-class youngsters lining up for the ”People’s Club”.

It all came crumbling down in the most excruciating way.

Martinez was found out and Everton had lost the flair-factor once again, as the Spaniard was shown to be miles out of his depth without his gimmicks, with only a silver tongue to give him one more season after the calamity of 14-15.

It was here that Mirallas had lost his love for the Blues and decided he wanted to move out. Trying to put himself in the shop window with that penalty resulted in the winger being humiliated as he caused Everton so much strife and frustration.

The following season, Martinez decided to cut his ties with Mirallas as he once again found himself in familiar circumstances, the Stands. Like his time wandering in France, Mirallas was lost for options. Was he to take the easy route and leave the place which had taken him in so readily? Or was he willing to repay that love the Gwladys had given him?

Super Kev decided to remain with Everton, and we’re all so thankful. This coupled with Roberto Martinez’ belated departure left Mirallas with a blank card and much ambition.

A new era… A new poster-boy?
Ronald Koeman arrived at Everton with fresh ideas and the experience of playing at the absolute pinnacle of Football.

He decided to give all of the squad a chance to find their way again in Pre-season, and Mirallas took full advantage of this opportunity as he blitzed past lesser opposition and showed signs of the star we all know he is.

With the new season – and era – underway at Goodison, it’s time for Mirallas to light up the dark nights rolling in again and show just why we all adored him in the first place.