Tell me mar, me mar.

And here we are again, back at a place where we have some happy memories. Some bad ones too.

We should be dead excited. As though we got fifteen nicker in our pocket in 1994 and can bunk on the train and under the fence into Pleasure Island in Otterspool to ogle the fit girls on the roller rink, or get told off on the Go Karts for ragging and doing boss skids.

A load of you have sensibly decided that the memory making this weekend will be the weekend away and the socialising rather than relying on Everton to turn up and enhance your mood, as that’s a rarity these days. It’s a sign o’ the times, if you will. 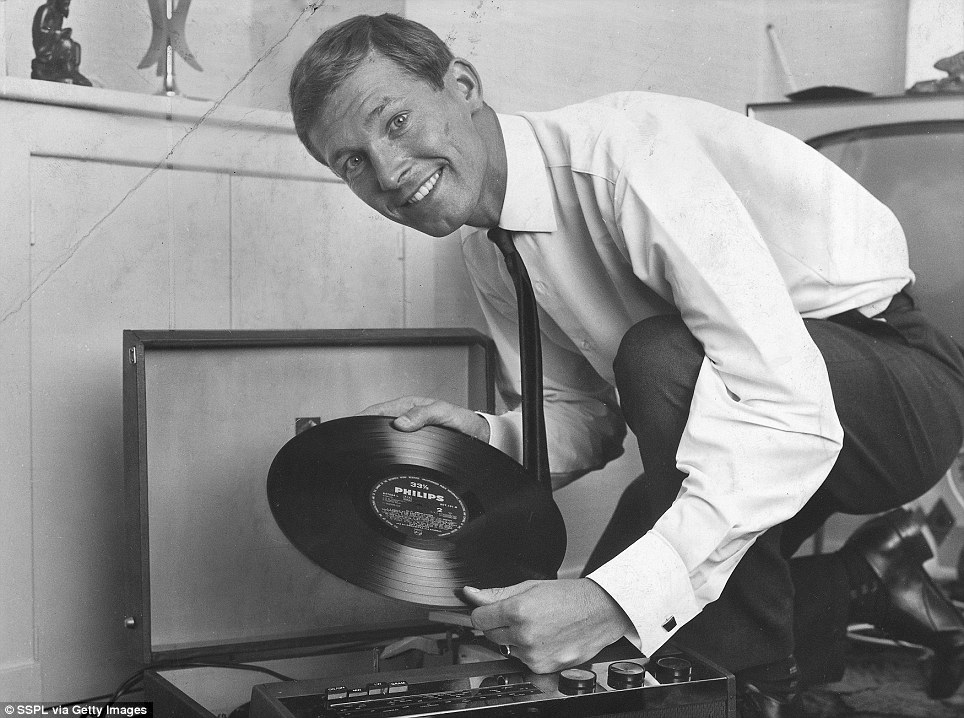 Nothing much more to say about the Merseyside derby on Wednesday other than what a bunch of shithouses we have playing for and managing us. In fact any of them connected with the first team, nothing more than that.

It was the tipping point for many and instead of evolution of the current set up, it points to needing some serious revolution when summer comes to shake things up and find a side and manager that get what Everton teams should be about.

Sack them, there’s no point worrying over something which doesn’t worry over you. 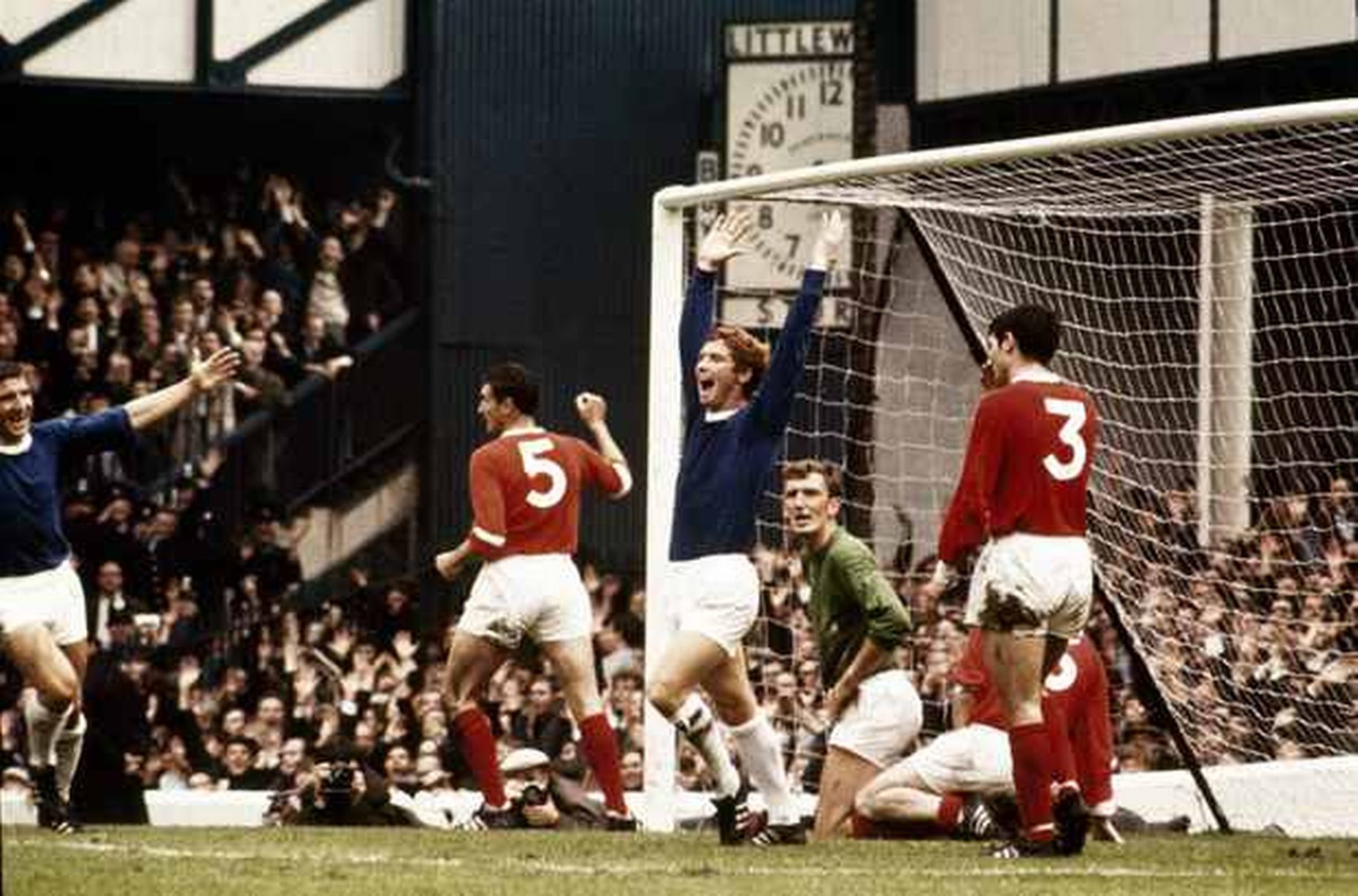 So onto the semi final then, a repeat of a memorable semi final seven years ago where we beat a weakened United team on penalties. I couldn’t give two shits weakened or not, that penalty from Jagielka is still vivid today. There’s the moments that make it worthwhile and we need more of them. And much more than prevailing in semi finals, we’ve got a history of winning stuff even if it seems to have been long forgotten.

What about who we’re playing? Well typically we drew the toughest team left in the competition even if they’re not the dominant strength they previously were. On saying that they have more know how on this ground than any other team around, and they’ve got a load of quality players to turn up on the day.

First of all an unfair quick look at the profile of opposition fans you’ll be rubbing shoulders with down in the big smoke. 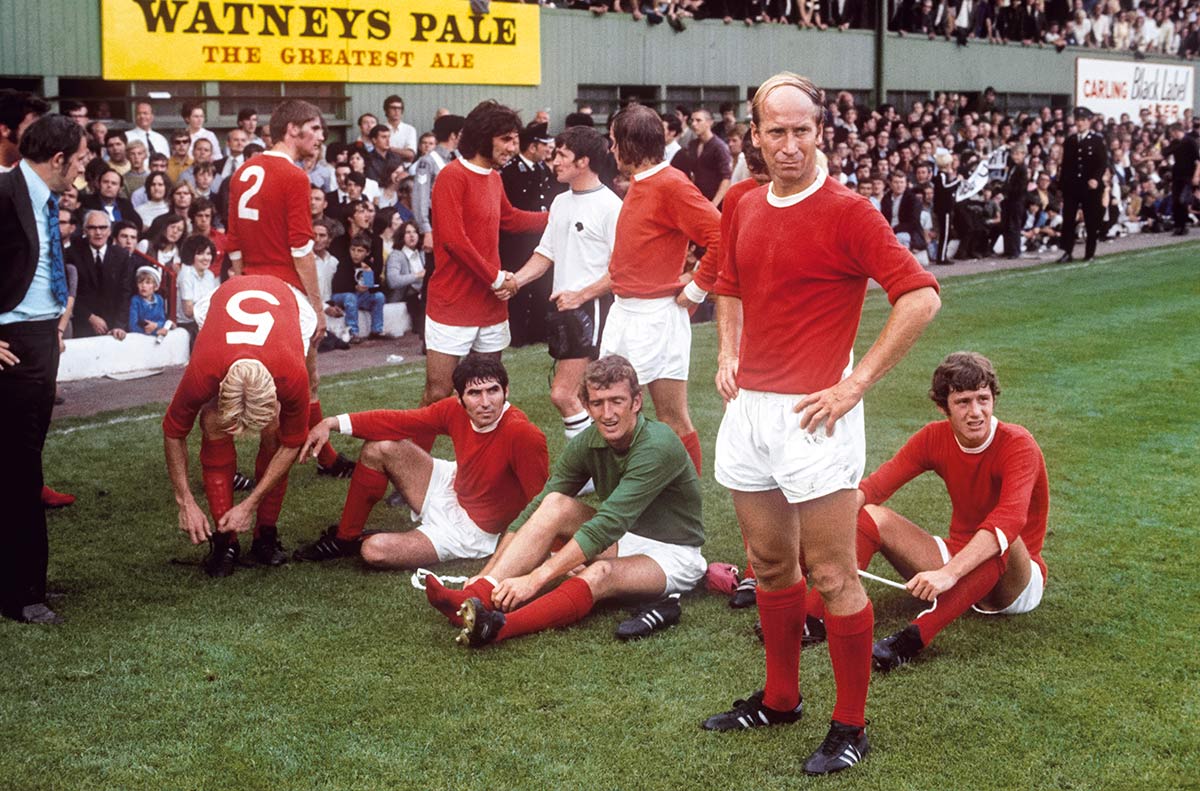 What is there to say? It’s a bit weird. I mean they tick some pretty big boxes of being working class, socialist and from the north west. Just how different can one city and it’s people be from another one less than an hour down the road? To an American that seems daft.

On appearance they are definitely are scruffier. It’s not just the “St John’s Market Makeover” look that gives it away but the things that just don’t go together. Like jeans with twenty pockets and Adidas Superstar with metallic silver stripes. Being a kid in Liverpool is difficult because you turn out in the street in any sort of moody clobber and you’ve got an entire block of kids taking the piss out of you all day. You learn fast to harass yer mar into battering the catalogue through chores and behaviour, and cry arsing.

YOU ALL WEAR SHELLSUITS THOUGH YOU SCARSS APETHS HAHAHA. Which leads us onto another difference, the humour. It’s like the racist and myopic beauts have been to three years of Bernard Manning Finishing School, it’s the type of rips that smelly piss stained arl fellas in the pub would shout, sat on their own obviously, to another table to break the uncomfortable ice. It’s a shame too as there’s a load of them who are sound enough to converse with and get along with, it’s just when they feel the need to try too hard that the inner Manc manifests itself. Or if you put them in a group. 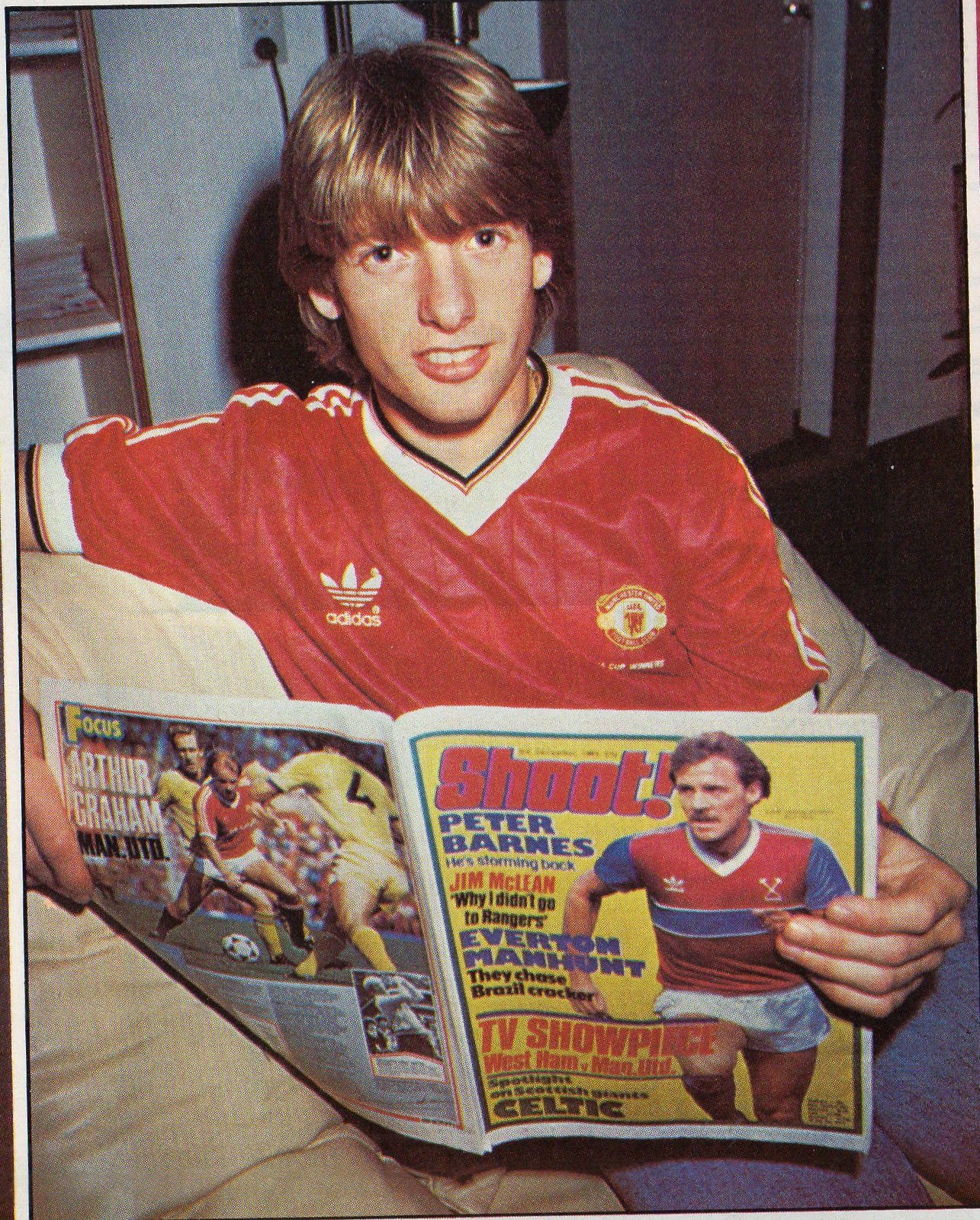 Their pack behaviour is what I can only describe as scruffy shithouse hyena. Watch out for this if you are unfortunate to share a transportation or a pub with them during your weekend. They use the term “banter” and revel in it, which is indicative of where it all goes wrong for them. For a collection of people who are intrinsically insecure they try to mask that with overbearing confidence on the basis of reflected glory from their chosen football team.

All the decent ones jibbed them off for FC United of Manchester so you’re left with the soggy lentils in the soup of football supporters, their primary objective for following their club is to be able to gloat and sneer.

Utter shithouses around their stadium too, or in superior numbers. For these reasons they must be beat.

They hate the redshite though so I am happy to say all the above was over dramatised for the purposes of a partisan preview and when it comes down to it I’d happily neck any one of them for their piping down of Liverpool Football Club.

They’ve got a great sense of humour haven’t they? Lads? Come on and stop frowning behind that wispy muzzy and male ear ring.

Here’s a list of some of their players who may start against us containing no useful information about how their inclusion may affect the game: Rooney – he’s fit again and we know what will happen as the footballing Gods smite us like they do. With hair that looks like he’s done duck apple in a bowl of Shredded Wheat.

Martial – talented, fast and young. A new breed of genetically engineered footballers who have it all and are free to take the piss as FIFA have outlawed snide and nasty centre halves as a leveller, and that’s a shame. Throw Barcelona into the First Division in the 80s and they’d have been volleyed into the bottom half.

Rashford – supremely talented young lad who seems level headed and an all round good egg. Makes me suspicious. Has Arthur Slugworth stopped him on the way home and offered him a line of cocaine yet? That’s when we’ll see what this lad is all about.

Carrick – elegant midfielder who I don’t want to sign for Everton on the behalf of his permanent expression that someone has just asked him to focus on something on the distant horizon.

Mata – imagine what he’ll do to this midfield and defence if he’s arsed? Has anyone ever seen him in a Power Ranger suit, and if not then why not?

Blind – is more at home in the Mystery Machine or Point Break than a defence at Wembley, for this reason alone if Lukaku doesn’t beast him then he best pipe down about how he deserves Champions League football or we’ll sign a forward that can hold the ball up, and then weep as Lukaku scores 35 a season for a team that creates chances.

Rojo – has tattooing just reached South America? They need some urgent training as the initial results look a paper scrawling you’d magnet on your fridge to make your four year old feel dead proud when she comes in the kitchen.

They’re managed by Louis Van Gaal who I find myself fond of as he genuinely doesn’t give two hoots about anyone else and looks like his head is allergic to his hair and actively trying to reject it. 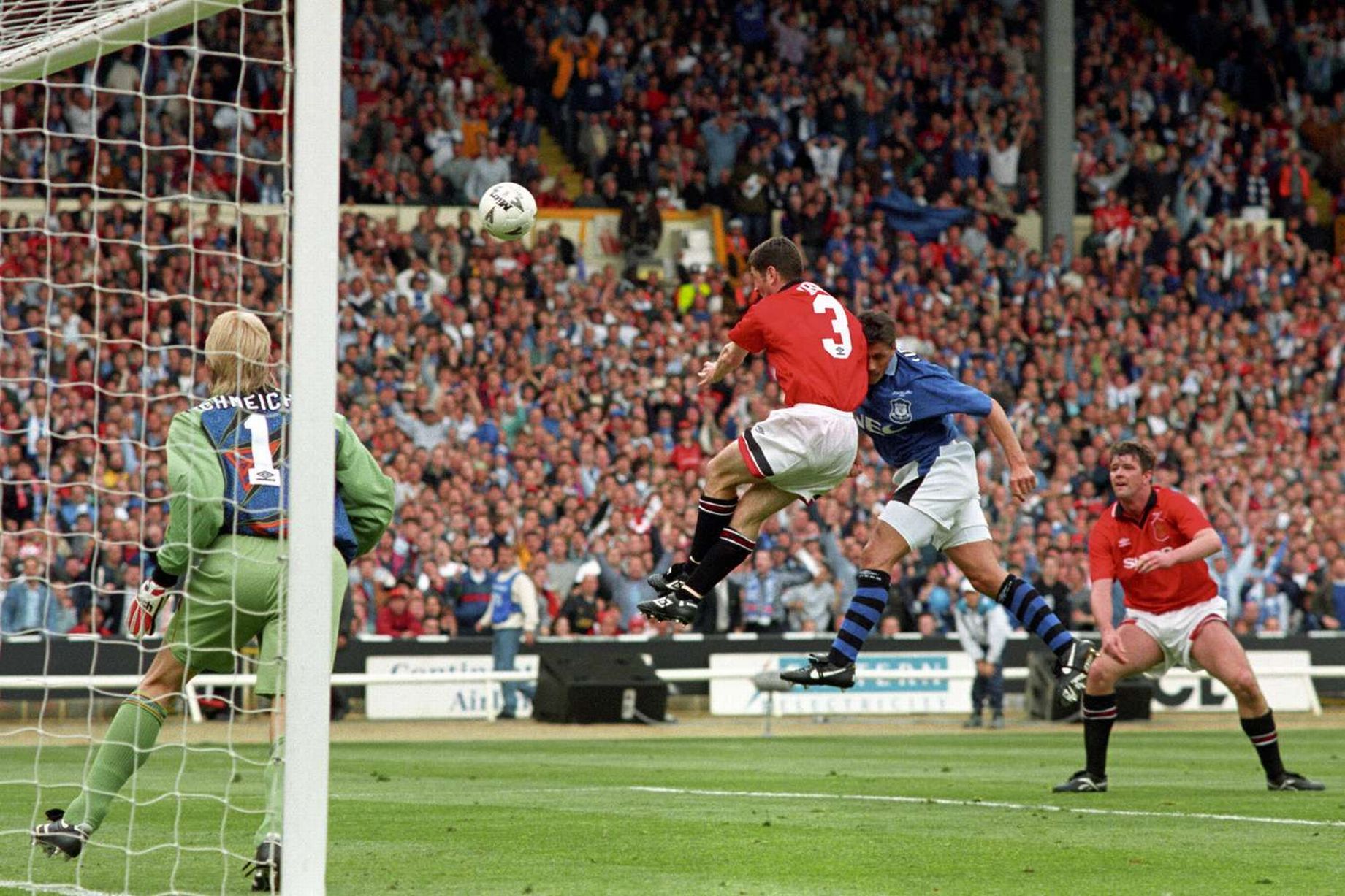 As for who Everton will play, well, that’s going to be fun isn’t it? There’s not a single player who is in form and fit, with a customary horrible injury list to hamper us just in time for our biggest game in years.

Lukaku will start up front on the basis of who else you going to play there? He’s horribly off form but will come good again and this is a good time to start.

Barkley was subbed at Anfield for being ineffective which for a scouse lad is damning. He may also be out of form but he needs to find consistency to his game, and drive, and this big stage offers him a chance to deliver which he’s failed to do so a lot of late. 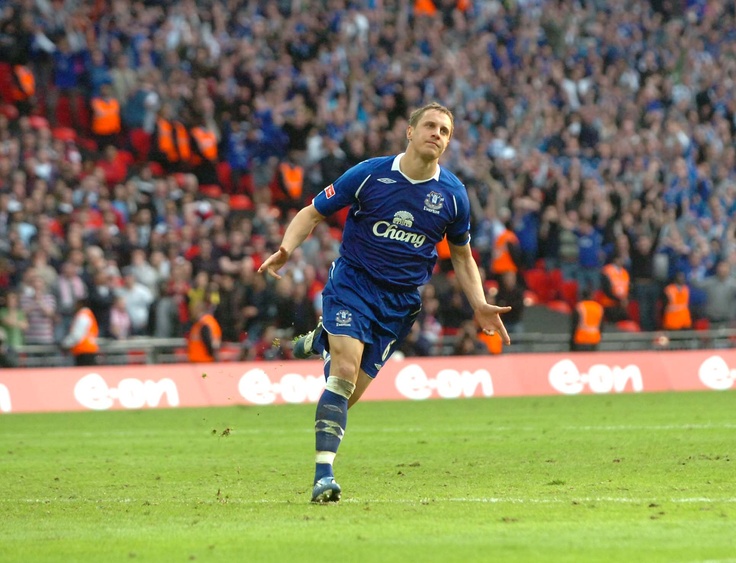 I reckon Mirallas will start on the basis of he ran about and looked arsed midweek, and then one from Cleverley, Lennon and Deulofeu – the latter which you’d hope would enjoy the spacious pitch of Wembley.

Barry is out so it will be probably McCarthy and Besic, unless the Bosnian needs to play in defence in which case Gibson. For all the criticism of the defence of late we really do have a weak willed midfield not protecting them much, never mind grabbing a game by the scruff. Besic’s words, slidies and sleeve tattoo has loads doting on him but we’ve seen far too little in him showcasing what he is supposedly capable of. The floor is yours.

Defence is a clusterfuck of issues and injuries. Presumably John Stones will have shaked off the trots to start, I hear Jagielka won’t be fit so that leaves Besic or Pennington if we’re being honest. Coupled with our full backs seeming incapability to block crosses it doesn’t paint a confident picture. Apart from Robles who is at least showing he deserves a run next season too, well in lid. 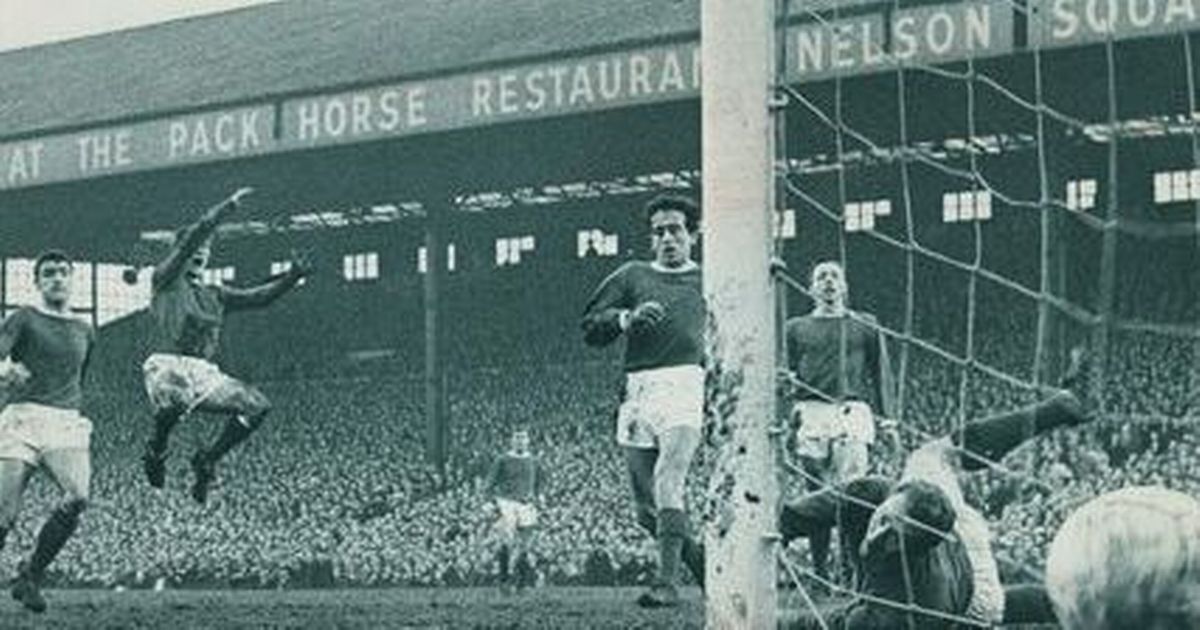 It’s a bit mad writing a preview for a Wembley semi final without much to offer in terms of optimism or hunger for the battle ahead.

But that’s where we are right now. The most honed Evertonian defense mechanism of apathy is being deployed again as that’s the most efficient method through shitty waters.

That’s me cried it in hopefully anyway.

In a week where a weird enigma from out west with a loyal following left the scene it would be good if there was a ready made replacement.

No time left for talking Everton, how much do you really want it?

21 years is far, far too long. Put up or shut up, and right into these.