By GrandOldTeam
Everton NewsLists
8 years ago 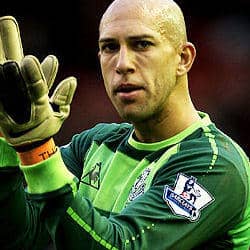 Everton’s current goalkeeper came in at number 5. Tim Howard joined Everton, initially on a season long loan from Manchester United in the summer of 2006, before signing on a permanent deal in February 2007.

Tim Howard has been an ever-present in the Premier League as Everton’s number one with 347 Everton appearances to his name, proving himself a model of consistency. So much so in fact, that in August 2012, the American set a new record for consecutive Premier League appearances for one club with his 184th game in a row.