Weâ€™re sound. Not beating a path down to world greatness like you, but weâ€™re sound. So get the f*ck out of our way. Itâ€™s that time of year again with the Merseyside derby looming on the horizon. A veritable potential twatfest where youÂ´re going to feel either ecstatic, furious or relieved (W/D/L) and have to tolerate the beaut in the workplace who doesnâ€™t even talk about footie all year suddenly wanted to â€œbanterâ€ you as he reveals heâ€™s a kopite. F*ck off Ste with your yellow teeth and minty jumper.

Weâ€™re in a rare position of going into it as sort of favourites which not many of us will believe despite it being the sh*ttest sh*te team for as long as the mind can remember, all nicely documented on the at times satire of their TV primetime performance. You keep breaking the USA super reds, itâ€™s totally awesome man.

Weâ€™ve stalled somewhat in the past two games, the most recent being a rather grim performance at Loftus Road which by the end of we were thankful to take a point as we were down to ten men. I suppose it was a banker that one of our key players would end up either injuring or suspending himself for the derby. Maybe itâ€™s Pienaar getting the butch look to match his voice and reinventing himself as a hatchet man rather than his previous look of a girl on the sidewalk in Tenerife that offers to plait your kidâ€™s hair in the day time, or sell you weed and suck you off in the night time.

Liverpool, Liverpool FC. Libburpeulfubbellklub. The bastard brother of ours that we share a house with but try our best to swerve on the landing most mornings. Heâ€™s going through a bad time too. Years ago he was the absolute tits his Gallini top, boss jeans and LA Trainer circa 1985. Bit of a snide muzzy but the birds loved it. Doesnâ€™t matter what sh*t he got into on the estate, the wider community just adored him and his impish smile. Now a days that brother is a blood shot Joop smelling divorcee boring the arse off anyone who will listen by overcompensating for a vacant personality. All tied up with the most acute form of A.D.D. that there is.

Swaying through different managers and ridiculous pipe dreams is a sign of a club in trouble, we know as weÂ´ve been there. Credit to them though they still truly believe they are a great of the game and something important whereas weâ€™d gave up the ghost by about 1993. Maybe they need a last day relegation scare to bring them to their senses.

We finished above them last year but havenâ€™t really been that arsed as, well, weâ€™re both not all that are we? Seventh and eighth is the best of the rest while down the M62 theyâ€™re taking the piss like when we used to get excited over finishing above them.

Rodgers is in and looks an absolute gift from Jah for those seeking to put the boot in. Heâ€™s the annoying team leader who got a lucky break and got the regional managerâ€™s job and own office. Heâ€™s living the f*cking dream and I donâ€™t doubt for one second heâ€™s got at least one hundred business cards in his left suit pocket that he canâ€™t wait to lash out to people heâ€™s not met.

Rodgers is also a bit weird with the young lids and in particular that Shelvey. Did you ever see Glitter or Saville being so brazen to put their hand on a teenagerâ€™s shoulder, look deep into their eyes and shower them with compliments? Did you f*ck. This is a Panorama Special 2037 waiting to happen.

Theyâ€™ve started the season poorly but on the back of two consecutive one nils theyâ€™re believing theyâ€™re turning some sort of corner. A cold and gloomy council estate corner where on the other side Tiki-Taka-land and unlimited candy floss exists. With a world full of rich people queuing up to spunk money at taking them back to the glory years itâ€™s only a matter of time I suppose. Theyâ€™ll drive these Americans out and latter day Edmond Dantes himself will be lining up to spend his cave of jewels and coins.

In amongst their over expensive payroll theyâ€™ve got some decent players whoâ€™ll inevitable show up and hurt us given the chance. Like when we sh*t our pants and/or the ref gives them a helping hand. Suarez is a c*nt. We know it, you know and they know it but heâ€™s of value to them so theyâ€™ll forgive mass genocide as long as a player is doing ace things for them. And do things he can. Itâ€™s levelled at him about his poor shooting but his general play making are at times is quite brilliant. The hard thing for them to swallow is selling Torres just when they bought Suarez as the two of them together would have been superb. Unfortunately thereâ€™s that other side of Suarez which has detracted somewhat and in them defending him has opened up a gigantic big f*ck off portal to an alternative universe in which the wider football world really donâ€™t like LFC. Itâ€™s peculiar but long may it last. Speaking of universes, if in that universe there was a planet called Referee then itâ€™s moon would be Suarez, orbiting it every three minutes when thereâ€™s a free kick to be won or a booking awarded to the opposition.

#booifyourescaredofSuarez !!!!111!!! No lads, theyâ€™re actually booing because heâ€™s a detestable little twat. But you know that.

Borini is out which is a boost for them so Iâ€™m not sure how theyâ€™ll line up. Probably with Suarez and Suso or maybe even with Gerrard tucked in behind. Whilst Gerrard is not the player he was heâ€™s one of the reasons theyâ€™ve been pulling our pants down in derbies in the last decade and wonâ€™t need another invitation to do so again. He actually comes across alright on that aforementioned documentary.

Midfield is a bit weird but contains some players who are sound on their day. Shelvey has the potential to be some player, heâ€™s got a good all round game, a superb shot and seems to have a nose for the big games like the player heâ€™ll be billed in replacing with Gerrard.

LFC managed to outdo Man City at least by trumping Rodwellâ€™s £12m by offering three more for Joe Allen. According to their fan base the wee midfielder has reinvented the art of football passing. If we donâ€™t appreciate how good he is then we simply donâ€™t understand football. Alright then. Letâ€™s kick him up the hoop early on. Itâ€™s worth a yellow. 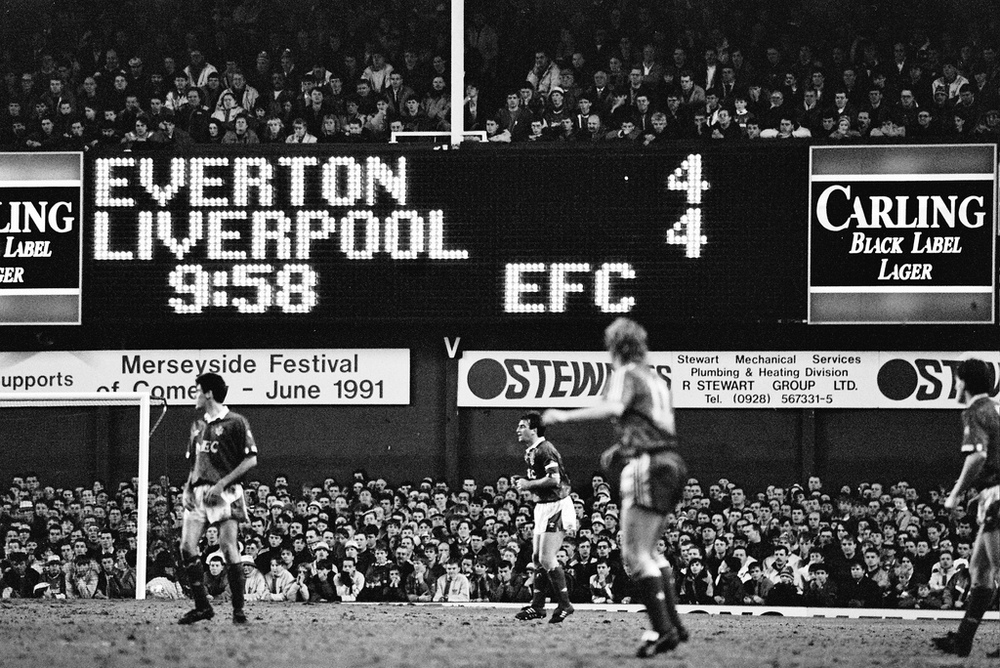 Sterling looks like he could turn into a player. At the moment heâ€™s like Ruel Foxâ€™s bastard stepchild, although from the local whispers the words bastard and child should perhaps be swerved when describing his talents. Heâ€™s fast and direct, and tricky to boot. Itâ€™s going to leave Moyes a dilemma at right back, and thatâ€™s credit to the 17 year old who looks like a Cabbage Patch Kids version of Wesley Snipe in Blade. On the other side of midfield we may see midweek European hero Downing as heâ€™s boss now.

Agger and Skrtel make a really good central defensive pair. A bit of both, aggression and composure on the ball. When theyâ€™re on form theyâ€™re very resolute. Theyâ€™re unfortunately let down by their full backs. Johnson going forward is very good indeed, if Glenn Hoddle was England manager heâ€™d have had 150 caps as a wing back. Defensively he can be a bit suspect, but then still I donâ€™t reckon heâ€™s as bad as made out. Enrique hasnâ€™t turned out how they wished he had but Andre Wisdom whoâ€™s been getting some games again is another young player who should turn out very well for them. Pepe Reina is out I think so Brad Jones should deputise in goal but we canâ€™t take any cheer there as they were down to their caretaker in goal for the semi-final and we still couldnâ€™t exploit it.

For us thereâ€™s a few variables and fitness hopes for Sundayâ€™s game.

Jelavic is going to start up front and you get the feeling heâ€™s still not really got going this season. Heâ€™s scored a few goals and jauntered round the pitch doing some ace things but heâ€™s missing a certain something. That certain something is a couple of winning goals in the derby hopefully.

Fellaini has been a big miss which isnâ€™t saying much as most teams would miss him on the form heâ€™s shown this season. Word on the street is that heâ€™ll make this and heâ€™ll be played behind the striker where teams donâ€™t like him most.

Pienaar will be a big miss on the left so itâ€™s going to be either Gueye or Mirallas playing there I think, with perhaps Naismith stuffed on the right if so. There could be a relative curveball with the Costa Rican called Bryan but it would seem unlikely.

Neville and Osman in midfield is as inspiring as a tub of butter with bits of burnt toast deposited in it, and probably slightly less mobile. The problem is that Gibson is very unlikely to be fit in time. Christ knows, maybe Fellaini will start here then or weâ€™ll forget Heitinga is sh*te there and play him. Just something please as I really donâ€™t want to watch us bummed in the centre of the park again.

Distin and Jagielka seem the best pairing at the moment. Jagielka in particular is returning to some of the form of two years ago where heâ€™s good for a goal saving tackle or two every game. Well in Phil. Local lad Baines needs to torture them from the left and as I said before, right back will be a tough decision. Iâ€™d probably go with Coleman as heâ€™s done enough to suggest heâ€™s getting to grips at right back. Howard pulled off a couple of sound saves against QPR, heâ€™ll be in the goal.

Derbies have been a particular blind spot of Moyes and itâ€™s without doubt theyâ€™ve had the upper hand. Itâ€™s not just about a bit of local one-upmanship this though, weâ€™re in a good position and would like to maintain it. Theyâ€™re in the way and need dealing with. I just hope we get the f*ck into them and donâ€™t put them on the pedestal our players and manager sometimes do. Itâ€™s one of the defining days of the year in the city and weÂ´ve seen some of the best of what our city is about in adversity so I hope the game itself and everything attached with it will be the usual good advert of our particular boss city and people. Yeah he does do our swede right in, but heâ€™s our brother.

When it comes down to business on Sunday heÂ´s f*cking getting it though.