Here it comes. Four games in an eleven day period that will pretty much define our season. You´re either gonna be made up with Everton or fuming at the world. First up, Spurs.

Nervous? There has been a distinct lack of games this season where we´ve been three goals to the good and coasting. Three goals is the bench mark for lowering the adrenalin in my blood significantly enough for me to half enjoy a game. One goal; keep it tight blues, don´t do anything silly. Two goals: get in, nice, but we need another. Three goals: iiiiiiitss a grand old team to play for, and checking the league table to see where we could lie at full time. So, point in order, we´ve been watching Everton on the edge of our nerves for most of the season. But this series of games will take the adrenalin to almost junkie levels. Big games with a bit at stake.

In retrospect we were quite lucky to come out of the QPR game with a point. They turned up and we were distinctly average. Disappointing as we´ve played QPR, Wigan and Blackburn recently and not showed up with enough desire or intent to win the game. I don´t know if it´s tactics or whatever, it just pisses me off. There´s enough in this Everton team to be beating these and all we´ve got is three points to show from the sum of all them fixtures.

Spurs set the ball rolling on Saturday evening. We played them two months ago, the rearranged game on a cold January evening at their place and they rolled us over without so much of a whimper from us. Too easy. They´ve got better players than us and no mistake but it was the lack of application that made many fume. Time to put that right at Goodison then.

It´s been on the whole a brilliant season for Spurs. Two or three good players in every position shows. One of our most important players of the past five years couldn´t even get a game for them. Mind you saying that, the half arsed Frenchman hasn´t started life too badly there. He must have had a few tips from Yakubu.

They´re a cracking club with a shed load of history, without actually winning much, so there´s no real opportunity for me to take a pot shot at them of condescend them much. Chas n Dave have been covered in previous toe curling previews of mine which leaves me not much to go on. Sure Redknapp has a face like the Bay of Biscay but again it´s been done to death.

As fans they´re a peculiar bunch, there is a hint of acute geordieitis about them but that´s a bit unfair on Spurs as they have actually won something since the Beatles got pubes. They´re very keen to let you know how massif, really MASSIF, their club are in Landon. They´ve also got that tradition of playing good football thing that the media likes to fawn over. All well and good, they´ve had some fantastic teams down the years, none more so in the recent era than now, and I include the side that ran us relatively close in the 84/85 season in that. John Cheidozie and all.

It was all going swimmingly with the media willing them to be in the mix with the Manchester clubs up until a couple of weeks ago when they collectively sh*t their gruds against Arsenal and United. Saying that with the exception of Stoke and Wolves there are no other teams apart from those near the top that have took points off them all season. So this won´t be a walkover.
It´s going to be tough and we´ll need to have some of that City and Chelsea thing we had recently to get something off them, and the same Goodison backdrop that makes their right back sh*t themselves under pressure from the moody tackling four foot Dutch winger we have or their centre halves being paranoid about which direction our seven foot slightly crap Argentinian is going to plough in to them from. Like an over excited clumsy dog. But at the moment he´s boss. At home anyway.

Saha will probably make a return to Goodison not long after leaving. Cracking move for him and it´s showed, it must help being laid on well more chances that he had with us but I can´t help but feel a bit let down that he sulked the place out for a while before leaving. On his day (we could have done with more) he was one of the most complete centre forwards I´ve seen in an Everton shirt and I don´t say that lightly. Up front partnering him will probably Adebayor who´s made the transition from The Fugees with go go gadget limbs to a lanky Vanilla Ice in the past two calendar years. He´s also a really brilliant footballer who will have to be kept very well shackled very well if we´re going to get anything from this.

Modric, the little butter faced fairy, makes them tick in the middle. Preventing him from doing so will require the dark use of grock arts of which we are well versed. Or we could just hope that Fellaini has one of them days where he is so dominant that that even the moon is aligned in his gravitational pull. Sandro or Livermore will provide the defensive foil in the middle. The stripe eyebrowed little tit Lennon won´t be pestering our full backs as he´s out with an injury. But Bale can play a bit.

The excellent Dawson is out for the rest of the season so it will leave Kaboul and King, if he achilles doesn´t burst in defence with the young lad Walker who´s having an excellent season at right back and that Cameroonian lid who scored from 35 yards against us as the full backs.

The QPR didn´t really give us any insight into who will be the settled team or what formation we´ll be playing for the time being. We did go 4-4-2 for the last half an hour but either it wasn´t the answer or it just was generally a dog of a day for us. For all the attacking talent Spurs have I reckon that Moyes will play it his usual pragmatic way for this, trying to stifle their midfield and prevent the front two getting any service.

It will be either Stacquilarsi or Jelavic up front with either Cahill (I know, I know) or maybe Osman behind them. The Croatian lad has been doing well in training so it´s a hard one to call. As referenced earlier there´s not been many things more heartening this season than the big galoot running at full belt into the opposition defence, it ups the crowd and denies the opposition time to build from the back. So that would make him supposedly ideal for this game.

Apparently the reason we didn´t win on Saturday for many was that we were missing Gibson. I´d say it was more the inclusion of Phil Neville in midfield, his time has passed there. But saying that there were worse players than him on the pitch against QPR. Anyway, I hope we see a change there. Fellaini and whoever. Don´t be surprised to see Osman start there if Cahill is ahead of him. Pienaar had a very quiet game last time out and I was going to write about how we need him for this but someone´s told me he´s got some sort of clause preventing him playing the club he currently belongs to. If this was the sh*te then they´d have a 120,000 signature petition into the European Court of Human Rights by now urging him to play.

Lovely goal by Drenthe. He gives us something which we don´t normally have; unpredictability, and for that reason he needs to get some starts. If Piennar is indeed out then it´s probably either Coleman or Osman there. It´s ok, I´m going to cover how Osman may start in goal at this rate.

Jagielka is edging back to fitness but he won´t be starting for a while as Heitinga and Distin are looking very decent at the back with the former in particular playing as well as he ever has done at Everton. He´s the anti matter to Jagielka being all composed on the ball and passing well but not being particularly fast. Him and Distin just works well, like Worcester Sauce and cheese on toast. It´s gonna be Baines and Hibbert at full back but I don´t reckon it will be too long before we´ll see Coleman playing the odd game at right back, since he isn´t really developing as we´d hoped. 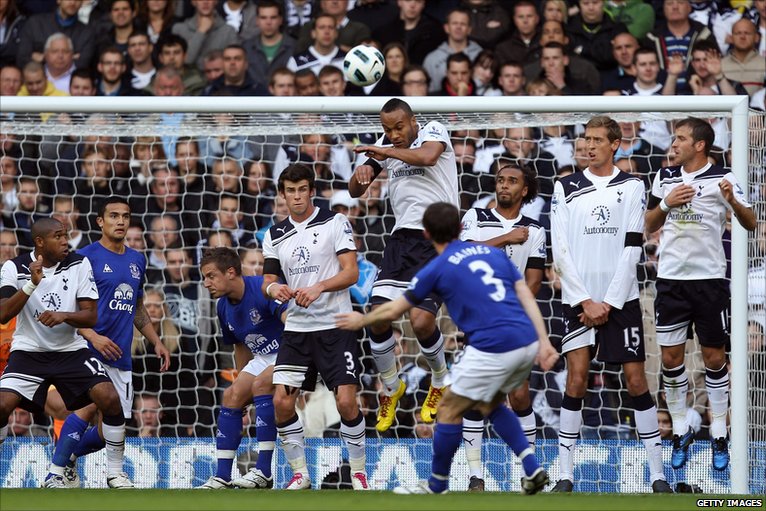 There´s no two ways about, it´s a tough task, but were still in with a shout of winning a cup and finishing high enough for a European place. In a season of mostly abstract pish that´s no bad thing. It could very well be me clinging to straws on the other hand like. Anyway, f*cking hurt them. Hurt them all. We´re Everton and you´re all a pack of bellends in the way of our season being a half decent one.