Barring any social unrest we´ll get to play Spurs finally this week.

There was a train of thought thinking that the the game being called off on the opening day of the season would favour us as when it did finally happen we would have got our early season sh*teness out of the way and actually give them a game.

We could do with some more time to be honest, like a couple of years or something. Maybe installing Suarez as the Local Community Officer down there could kick it all off again and bide us some time. We might even get away with a Pools Panel Score Draw.

Everton have done well this season to temper any expectations. Even when we have looked like we´re pulling ourselves together there´s the inevitable horror show just around the corner to stop you getting excited. Struggling to put away a non league side in the FA Cup at home is hardly steadying the ship material.

Speaking of that game, it won´t have done much to persuade either the players or the fans that we can go away to the currently third best team in England and pull off a result. Then again, Everton have done stranger things. It´s probably best for sanity if we prepare for the match with the odious stench of a rinsing probably coming our way, as it will hurt less.

Being this our game in hand it´s gonna make the league look worse when you don´t have that extra three points to add on to give you some hope even though you knew in the first place it´s a game we´d probably lose. Welcome to the world of 11th.

Spurs have done really well this season. They possess some really fantastic players and on paper have no real weaknesses. Strong in defence, some really excellent midfielders and not short of a goal or two. They play some lovely football too. In essence, they´re the team we hoped we would have developed into when we were on the up about four years ago.

There was quite a long time where despite spending seemingly unlimited reserves of cash they simply couldn´t get above us in the league, but once they did – similar to City – they´ve sped out of sight leaving our faces a bit minty with that cloud of dust they left. The media love them too.

Their recent fate changed when the old crooked king of the twitchers took them over. He´d probably be the man most Sun readers would like to have a pint with and he´s a gigantic bulb to boot. As every year passes he seemingly morphs into a passable Spitting Image doll.

Although I´d trust him as much as a timeshare vendor he´s good at getting the best out of the fragile minds of your average professional footballer. He´s the antithesis of the latter day Moyes in his footballing approach and make no mistake they´ll give us a game. The BBC Live Text lids spaff their Farahs over Gareth Bale most weeks and he´s a top player but there´s a whole team of more. Van der Vaart on his day is terrific, he makes game look easy. Adebayor has been an astute loan signing as he gives them a real consistent goal threat, backed up ably by that little gap toothed titwad Defoe and Pavylchenko.

For some reason Modric is clearly angling for a move away but while he´s there and arsed he is one heck of a playmaker. Pienaar can´t get a sniff, that gives you some indication of their strength in depth. 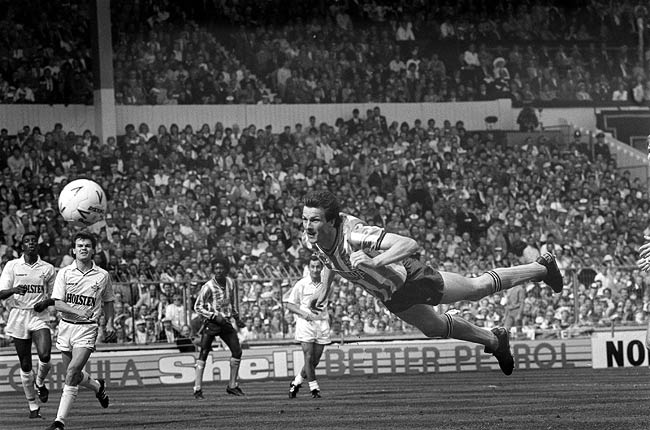 The Spurs fans do have a bit of geordieitis in their assertion of being one the world´s greats whilst not having won a great deal. You can forgive Spurs more for that as they do have some pedigree in the top flight for producing some pretty teams. They are somewhat like that girl you know who has too high standards in attracting a suitable male. Sure she´s not bad looking but is she all that? Hmmm. You would like but she´s best lowering her sights to a semi detached in a cul de sac, a five year old people carrier and a suspicion of mutual weekend domestic violence.

Good luck finding a pub down that way with No Away Fans plastered all over it, the inhospitable nuggets. What would Chas and Dave think?

Despite our very average season, we´ve had some large bits of luck. Blackburn, Fulham away. Some moody penalties going our way. Importantly we´ve not had many injuries as we have a squad made out of cardboard. That´s all changed in the past couple of weeks. Jagielka is definitely out while Coleman and Rodwell look like they will miss. We have doubts over Osman, Cahill, Hibbert, and Drenthe.

Our problems up front have been very evident and well documented. So lets say it´s between Saha, Anichebe, Vellios, McFadden, Stracquilarsi and perhaps Donovan. It didn´t strike fear into the heart of the Tamworth defence like.

I do hope Drenthe makes it as him and Donovan on the sides of midfield at least give us a credible attacking threat. Fellaini needs to turn up for this one or were goosed. It´s probably gonna be Phil Neville in the middle with him unfortunately.

Heitinga has been talking up his new defence mate Distin this week, we´ll swerve the PR game until they deliver some clean sheets. Doing so at Spurs would be impressive. Everton picked up when Baines came on in the cup and again we´ll be looking to a big performance from him in order to gain a result. We´ve never relied on a left back so much since Hinchcliffe´s boss corners.

Everton of recent years seemed to thrive when the chips are down and we need to pull out a result from somewhere. We could do with something like that now. Will we get it? Probably not in this game. But were very forgiving as a tribe if at the very least stand up and have a go.