Everton putting a couple of results together? It must be the second half of the season finally, come in and wipe your feet on the mat, weÂ´ve been waiting for you.

Big result that, as well as being one of the most super things known to mankind: a late Everton away winner. Not that anyone will be getting carried as, well you know, this is Everton. Seven points from nine make it a productive holiday period though – making it ten out of twelve would be just what the good doctor ordered.

For the second consecutive game we fielded a line up more awkward than 115 pages of racism. Yet once again we had the better of the play as our forcefield of dullness sapped all life out of the average opposition. What was the clincher was seeing us put on attacking substitutes before the sixtieth minute and without having fell behind. Too often Moyes has played it safe prompting an increasingly loud chorus of discontent from the fans, pisses me right off too. ItÂ´s hardly as if heÂ´s changed his footballing approach overnight, but weÂ´d like more of it.

Riding into town on the meff bus with their downtown Moldova fashion sense and Lancashire gypsy culture, ittttts Bolton. B-O-L give me a T-O and N. From deep in the heart of woolness their chip eating tribes march into town in their tens and elevens, hey brother give me six!

ItÂ´s been a dog of a calendar year for Bolton. Rewind to 12 months ago and their bulimic ewok looking manager was the fresh young thing of English football. Passing football, a team lacking super stars but with plenty of quality picking results up all over the show.

Then they just turned proper sh*te. Like that, no warning or nothing. As puzzling as spontaneous human combustion. Coyle woke up one day and his wife wasnÂ´t dazzled by his infeasibly long and skinny teeth and the tracksuit manager act just didnÂ´t work the same magic for the players.

Now itÂ´s not far off approaching Gary Megson style shouts for his sacking to the most Royston Vasey of all chairmen, Phil “Philo” Gartside.

TheyÂ´ll obviously beat us for this but their players are a bit nineties Everton and theyÂ´re bottom of the league. They were much improved performance wise in their last game where they got a home draw against Wolves, a result weÂ´re familiar with in fairness.

ItÂ´s touch and go if Gary Cahill will be still playing for them in the game as theyÂ´ve agreed a free with Chelsea, and heÂ´s only got six months left on his contract. Up front they have the Aldi Henry himself – David NÂ´gog – and Klasnic whoÂ´s not short of a goal if he gets half a sniff. ItÂ´s a very average midfield anchored by Mark Davies and a very suspectable looking defence, hopefully marshalled by Zat Knight and Wheater. Speaking of Wheater, when theyÂ´re auditioning for Rodney in the Polish remake of Only Fools & Horses then heÂ´s an absolute shoe in.

For all of that bravado, weÂ´re still playing very average football. IÂ´m hoping that the brief flirtation with attacking football might actually prompt a very different starting line up to the previous two games. ItÂ´s not time for getting too overboard on the proficiency of either Stacquilirsi or Anichebe based on the WBA game, itÂ´s not too hard to look a vast improvement on Saha at the moment by merely running about and appearing to look half arsed. It did turn the game though. Against Bolton youÂ´d think that it will be us pressing the play so the option of having two strikers up front would be very viable. ItÂ´s hardly as if Saha or Cahill are doing anything to keep them out of the team. At the very least we could do with Osman behind the forward or Landon Donovan.

Good to see the American back, we need him. IÂ´m worried about the expectations on him this time as he was such a success last time out. But sack that and allow us to dream for a little while, he plays ace on his day and he gets the whole Everton thing. Your mother/bird/aunties would absolute love him too. HeÂ´ll probably start from the bench but I canÂ´t wait to see him playing again in royal blue. WeÂ´re also in a better position than last time he joined us, weirdly enough, if not personnel wise. 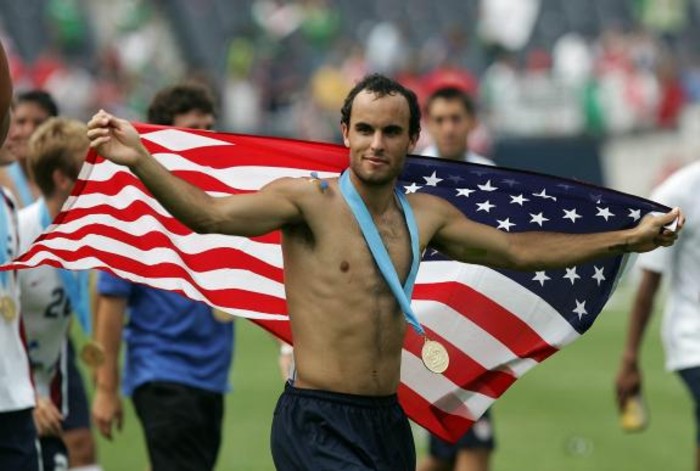 Drenthe was a notable absence from not just the team but the squad. It was said he was injured but it wonÂ´t stop a load of internet tongues wagging as he has got more than a whiff of 2Unlimited about him. Hope heÂ´s back for this. Osman had a decent game again, involved in most good things we done. Neville and Heitinga in midfield isnÂ´t what you need in these games. Fellaini should be fit for this one and Rodwell will be one game nearer to fitness, he started brightly but ran out of steam quickly against West Brom. Who will starts on the wings is as much up for grabs. Gueye, despite having the acceleration of jam, got more game time. Maybe even Donovan will be employed on the right of midfield. We need to find the right mix as its been a while since weÂ´ve played good football.

If Heitinga is dropped from midfield then thereÂ´ll be an awkward choice for Moyes, with Distin looking decent in the past couple of games. When was the last time we produced two back to back clean sheets? Baines is becoming noticably narkier with his team mates with each passing game, he needs someone in front of him for a run of games that he can build an understanding with, a la Pienaar.

So itÂ´s a start and anything other than three points from this will bring us right back to square one. 2011 was not a year of enjoyable Everton watching all things considered and one result doesnÂ´t make me think that this year will be all that different.

In a transparent attempt to sign off another generic dull preview I leave you with the words of Dr Martin Luther King: “We must accept finite disappointment, but never lose infinite hope”. Perhaps he gets Everton as much as his compatriot Donovan.