By chicoazul
Everton News
10 years ago

A bit less distance to travel down the M6 or even better, the East Lancs, this week as we head deep into the void that separates two cities and is populated by the wool tribes.

It wasn´t really the loss that hurt on the weekend it was the manner, as we showed as much ambition as a time served civil servant. There was a point in the second half where United looked wilted and instead we done our customary roll over by inexplicably retreating towards the edge of our penalty area, which is a daft thing to do against United.

We´ve done well against Wigan away in recent years, usually finding a way to win in typically turgid games. The expected defeat against United means that a result against Wigan is essential to remaining competitive in that little triangle of tosh thing we´ve got going on, between 6th to 8th.

Wigan established themselves in the top division driven by the ravenous ego of Emperor Whelan who quite frankly is one bad bell. An advert for why the working class shouldn´t get rich, he famously tried to show off his amazing flying machine in order to persuade Andy Johnson to move to Wigan instead of us.

Famous for their loose women, gelled hair and male ear piercings; it´s hard not to like Wiganers. Good folk who still have their loyal fanbase which is lucky as Whelan´s attempts at razzmatazz haven´t packed their stadium too often.

They´re languishing in the bottom three still after getting beat by Sunderland but any club scrapping for it´s life won´t be an easy game. But unless the ghost of Paul Scharner turns up then we should have enough quality to have a good go of it.

Shouldn´t be too many changes for us on the weekend. Cahill doesn´t look fit/effective and should be told to sack his little Aussie thing off as it has effectively put him on the payroll for nothing in the second half of the season. Scoring a free header against The Soloman Islands isn´t all that Tim. If you´re so proud then audition for Romper Stomper 2.
Bilyaletdinov is surely out of chances now, best wishes but I´ve not seen a player more not suited to wearing a blue shirt. The odd boss toey from 25 yards is no good when it´s apparent that his team mates don´t have a great deal of confidence in passing the ball to him. Hopefully Arteta will be ready to resume his place on the left, if not then it´s time to give Gueye a bit of a run.

There´s not too much options elsewhere so you´d expect the defence and central midfield to remain the same.

The weekend will start on a high note for most with a day off to fawn over some royal bint´s fashion sense. Liverpool´s five point lead will be insurmountable for us with the games we got left. Anyway, weekends are so much more sunnier when EFC get three points. Here´s hoping for some of that. 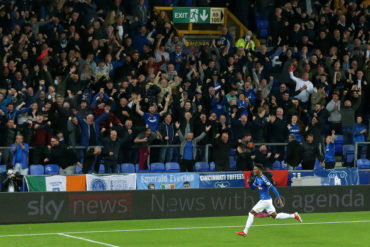